Everything You Need To Know About 1n4007 diode 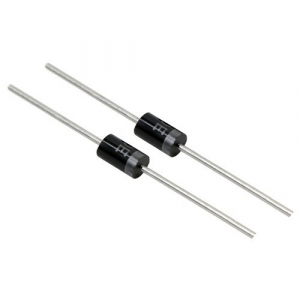 In microelectronics, a diode is a typical PN junction semiconductor device. Because P and N components are present. As a one-way switch, it controls the flow of electricity by allowing it to move in one direction while preventing it from doing so in the other.

The silicon-based 1N4007 Diode is a part of the 1N400X series. It is a rectifying Diode used in electrical products to change alternating current (AC) signals to direct current (DC) signals.d

A component that only allows one direction of electrical flow is the IN4007 Diode. The current should always flow from anode to cathode, in other words. The 1N4007 Diode can withstand peak currents up to 30A and has a maximum current carrying capability of 1A.

These diodes change AC to DC since they only allow electrical current flow in one direction. Utilizing the suitable Diode while creating a rectifier is crucial because the circuit could be harmed if you don’t.

A 1N4007 diode’s logic symbol pinout is shown in the diagram below: 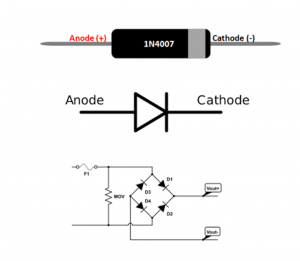 The Diode won’t conduct an electrical current, theoretically, when the cathode voltage is higher than the anode voltage. The Diode only allows a very small current to flow when these conditions exist. The Diode will fail if the voltage differential is too significant and causes the current through it to grow.

When switching from a forward to a reverse-biased mode, the 1N4007, like other diodes, needs a recovery period in reverse. The Diode produces a substantial reverse current during reverse recovery, which causes it to become warm. The Diode requires more time to recover from an input signal with a higher frequency. The 1N4007 Diode has a low frequency due to its long recovery time. The only applications for which it should be used are low-frequency ones.

An electrical part that only allows one direction of current flow is called a 1N4007 diode. The Diode halts the current when it changes polarity. The 1N4007 Diode is a small, versatile component with a maximum operating voltage of 1000 volts and a maximum operating current of 1 amp. A diode can malfunction just like any other electrical component. It might either short out and conduct electricity either way or fail to open, conducting current both ways. The Diode may also leak heavily in the other direction. A 1N4007 diode can be tested using a battery, a voltmeter, and a low-value resistor.

An electrical component known as a diode allows current flow only in one direction.

A white ring can be seen on one end of the 1N4007 Diode if you look at it closely. This designates the Diode’s cathode end. On the opposite end is the anode.

A white ring can be seen on one end of the 1N4007 Diode when you pay close attention to it.

Once the multimeter is turned on, turn the function knob to read resistance. Make sure the red probe is hooked into the positive socket and the black probe wire is in the common, or negative, the socket of the meter.

A 1N407’s cathode lead should be connected to the multimeter’s black probe. That side has stripes or bands on it. Anode lead of the Diode should be connected to the red probe. The probe tips could be useful for wrapping the Diode’s leads around. Since your body’s resistance will affect the readout, touching the probe tips or leads with your fingers can affect the meter’s reading. A very low reading, like 1 ohm or 0, should be shown on the meter. The Diode should be thrown out if you detect a high resistance since this indicates that the internal crack has opened.

Reverse the probe wires on the Diode so that the red probe is in contact with the cathode and the black probe is touching the anode lead.

The meter’s probe tips’ diodes should be removed. Turning the meter’s selector knob allows you to choose between DC milliamps (thousandths of an amp) and microamps (millionths of an amp). The positive end of an AA battery clip should be wrapped or crimped to one lead of the 470-ohm resistor. Incorporate the resistor’s free lead with the Diode’s cathode lead. The positive probe tip of the multimeter is where you should wrap the anode. Attach the meter’s negative probe tip to the battery clip’s negative terminal. Fill the clip with a fresh AA battery. You should measure the current and ensure it’s no higher than five microamps. The Diode must be replaced if the meter shows a significant increase above this.

When does the 1N4007 diode function as a short circuit?

A 1N4007 diode has what function? The 1N4007 rectifier diode is designed to be used in circuits where the transformation of alternating current to direct current is necessary. It can transmit currents of up to 1 A and has a peak inverse voltage rating (PIV) of 1,000 V.

The rectifier diode 1N4007 has a PN junction. The 1N5819 Schottky Diode has two pins, can operate between -65°C and 125°C, and has a maximum current of 25 amps. It is commonly used in high-frequency devices like DC-DC converters and inverters.

Single Junction Semiconductor is known as 1N. The term “double junction semiconductor,” or 2N, is an acronym.

What current capacity does a 1N4007 diode have?

What Sets a Schottky Diode Apart from a Diode?

They are therefore a great choice for radio frequency applications and low-voltage electronics.

There are numerous uses for these 1N4001 general-purpose diodes. Diodes enable a single-direction flow of electricity (anode to cathode). In addition to being frequently used to rectify voltage, these diodes can also be utilized to protect against reverse polarity voltage. There is a 1-amp forward current with a 30-amp maximum surge available. A package has two diodes.

What are the 1N4007 Diode Pinout’s Features?

The 1N4007’s specifications call for a peak reverse voltage of 1000 volts. 2 On average, the forward current is Peak Forward Current (Non-Repeatable): 1A: 30A (4) Working Junction from -550 to 1750 degrees Celsius. There is a 5-Watt power loss. 1.1 volts in the direction of forwarding motion five uA of reverse current, the package DO-41 is a DO-41.

The IN4007 diode short circuits when the supplied input voltage is higher than 0.6 volts. The 1N4007’s forward drop voltage is 0.6V. The Proteus simulation that follows is an excellent illustration of the diode switching idea: The two circuits depict the states of the Diode.

What circumstances cause a 1N4007 short circuit?

What are the characteristics of a diode’s forward current?

The 1N4007 can be used in many different circuits. However, it is frequently made for general-purpose rectification, and it can also be used in circuits that need voltage spike blocking, voltage blocking, and other functions. Digital logic circuits can also benefit from using it.

The 1N4007 is a type of 1 A silicon rectifier diode frequently found in AC adapters for everyday home appliances. Because it is ineffective for square waves beyond 15 kHz, it is a reasonably slow rectifier diode. The 1N4007 Diode is a typical recovery rectifier with molded plastic housing. Although it can sustain peak currents of up to 30A, the maximum current carrying capacity is 1A. Therefore, this Diode can be used in circuits rated for currents lower than 1A. A reverse voltage peak of up to 1000V can be withstood despite the small reverse current of 5uA.

For more details on 1n4007 diode, contact us at ICRFQ. We manufacturer the best electrical components in China.