The 2N3904 and 2N2222 are both general purpose NPN bipolar junction transistors used in a variety of electronic applications. Although the two transistors are both NPN, they have different characteristics and are suitable for different purposes.

And before you decide to buy one, it will be wise to know their differences.

In this guide we are going to analyse the key differences between 2N3904 and 2N2222 transistors.

At the end of it all, you will know which one is a perfect fit for you.

Overview of a 2N3904 transistor

A 2N3904 is a type of NPN bipolar junction transistor (BJT). It is commonly used in general-purpose low-power amplifying or switching applications. It has a gain value of 100 to 300 and can operate at a maximum collector current of 200mA. The transistor can also operate in a wide range of voltages, from -55V to +150V. It is also available in a variety of packages, including TO-92, SOT-23, and TO-220. The 2N3904 has a wide range of applications, including audio amplifiers, switching circuits, analog circuits, and digital circuits.

A 2N2222 is a bipolar junction transistor (BJT) commonly used as an amplifier or switch. It is a small signal NPN transistor that can handle up to 800mA and has a gain of 40 to 800.

It is commonly used to switch small loads such as LEDs, relays, and motors. It is also used in many analog circuits, such as audio amplifiers, radio receivers, and op-amps. It is available in a wide variety of packages, including TO-92, TO-18, and SOT-23. Also, it has a low voltage drop and low saturation voltage, making it ideal for use in low-power applications.

Now let’s look at various differences between these two transistors. 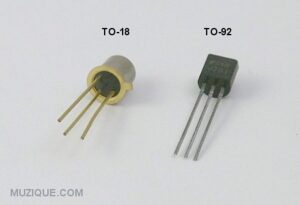 The 2N3904 is available in a variety of packages, including a TO-92 package, a SOT-23 package, and a SOT-223 package. The 2N2222 is only available in a TO-18 package. Keep in mind that the package simply refers to the physical shape and size of the transistor and does not affect its performance.

Here are questions that most people tend to ask about 2N3904 and 2N2222 transistors.

What are the similarities between 2N3904 and 2N2222 transistors?

Beta 2N3904 is the current gain of the 2N3904 transistor, which is typically between 100 and 300. The beta of a transistor is the ratio of the collector current to the base current when the emitter current is constant. A higher beta value indicates that the transistor is more sensitive to input current and can provide a stronger output current.

I hope you have learned the differences between the 2N3904 and 2N2222 transistors. And when it comes to buying transistors in China, consider choosing ICRFQ. We are a trusted supplier of quality transistors for sale. Contact us to place your bulk orders for the best transistors.