The 2SC-3320 is an NPN transistor, which stands for negative, positive negative. Silicon is the primary component of it. A power transistor is essentially what this device is. An electronic device known as a power transistor can manage a specific amount of power. The 2SC-3320 has three terminals, each of which will have its description in a later section. It is a device that is effective, with higher effectiveness, currently on the market and is available at a lower cost. It is the most popular device among transistors with similar functions because it is cost-effective and has distinctive characteristics. It comes in TO-3PN packages and can be purchased.

Because of its many enticing qualities, it has garnered much attention in the consumer industry. These features include its capability of switching at high speeds and high voltages, as well as its ability to handle high voltages. In addition, higher reliability is the primary and most prominent characteristic of this type of transistor, which distinguishes it from standard transistors.

It is suitable for various applications, such as General Purpose (GP) power amplifiers, high-frequency inverters, switching regulators, ultrasonic generators, and many more. This was the condensed overview of the subject 2SC3320. In the following paragraphs, you will find additional information about the fundamental operation of this device.

When represented symbolically, the emitter arrow of the 2SC3320 will point away from the actual structure in which it is placed because it is a form of NPN transistor. The following represents its symbolic meaning: It is a power amplifier that can deal with a certain level of power. It is a silicon transistor, and there are many low-cost options for purchasing them on the market right now. As will be seen in the following explanation, it possesses three terminals. It possesses high reliability, a high voltage, a fast switching speed, and many additional features. Its applications in the real world include switching regulators, general-purpose amplifiers, inverters with higher frequencies, ultrasonic generators, and other similar devices. 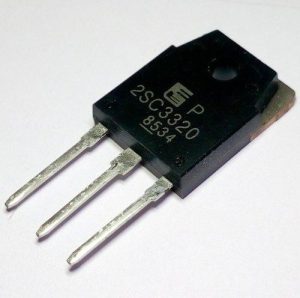 What is NPN Transistor?

Sinking is another name for the phenomenon denoted by the abbreviation NPN, which stands for negative, positive, and negative. The NPN transistor is a bipolar junction transistor (BJT). The initial letter ‘N’ in the transistor’s name indicates that the material’s coating has a negative charge. Where “P” denotes a positively charged layer within the two transistors, a positive layer sandwiched between the transistor’s two negative layers. In most cases, an NPN transistor is employed in various electrical circuits for switching, and it also boosts the intensity of the signals that pass through them.

An NPN transistor is utilized in most cases since it requires little preparation before use. An NPN transistor must be constructed from a semiconductor material capable of holding some current if it is to perform its function correctly. But not nearly as much as the maximum amount of exceptionally conductive materials like metal. One of the materials that are most frequently utilized in semiconductors is silicon. These silicon transistors are extremely straightforward in terms of their construction.

A computer circuit board uses an NPN transistor to convert the information into binary code. Numerous tiny switches that may be turned on and off on the circuit boards enable this procedure. The switch can be turned on with a robust electric signal, but it can also be turned off when there is no signal.

Why is the NPN transistor used?

There are several categories of bipolar junction transistors, each determined by stacking the semi-conductive materials. PNP transistors have positive, negative, and positive layers, whereas NPN transistors only have negative, positive, and negative layers. However, the function of the transistor, which can be either an amplifier or an electrical switch, is fundamentally the same.

How does the NPN transistor’s current flow?

The current in an NPN transistor moves from the emitter to the collector. The base terminal regulates how much current flows through it.

What is Bipolar Junction Transistor?

Electrons and holes are used as charge carriers in a single silicon component called a bipolar junction transistor. A bipolar junction transistor allows for the control of huge quantities of current flowing between the other two terminals by injecting a tiny quantity of current into one of its terminals. Thus, switching or amplification operations can be carried out by the gadget.

We hope you’ve enjoyed this guide, and we appreciate your consideration. If something is missing from this article, please let us know as soon as possible so we may make the necessary changes quickly. If you have any issues, you can ask us at any moment in the comments. Our team is always available to assist. We will make every effort to resolve your concerns.

If you are looking for a quote or more information on 2SC3320, ICRFQ is here to help you get exactly what you need at a price that fits your budget. Trust that you are in capable hands with us because we are the premier China-based distributor of electronic components.