This AO3407A power MOSFET from Alpha & Omega Semiconductor can be used to amplify electronic signals and switch between different electronic signals. Both of these applications are possible with this single device. It can dissipate up to 1400 milliwatts of power at its highest capacity. This MOSFET transistor has an enhancement mode of operation and uses a P channel. This MOSFET transistor has an operating temperature range of as low as -55 degrees Celsius and 150 degrees Celsius. But because this is a field-effect transistor, let’s go through what exactly that is and how it works.

To regulate the flow of current through a semiconductor, one type of transistor known as a field-effect transistor, or FET, employs the utilization of an electric field. Source, gate, and drain are the three terminals on devices known as FETs (also known as JFETs and MOSFETs). Applying a voltage to the gate of a FET, which in turn changes the conductivity between the drain and the source, allows these devices to regulate the flow of current.

Mohamed Atalla, an Egyptian engineer, made significant contributions to the field of field effect transistor (FET) research in the late 1950s. In 1958, he published the results of experimental work that demonstrated that the neutralization of surface states could be achieved by developing small layers of silicon oxide on clean silicon surfaces. Surface passivation is the name given to this process. It is a technique that has become vital to the semiconductor industry since it paved the way for the mass manufacture of silicon-integrated circuits.

After that, in 1959, Mohamed Atalla and Dawon Kahng came up with the concept of the metal–oxide–semiconductor field-effect transistor, or MOSFET for short. The bipolar transistor and the JFET were primarily rendered obsolete by MOSFET’s invention, significantly impacting digital electronic technology’s progression. The MOSFET made it possible to develop high-density integrated circuits because of its high scalability, significantly lower power consumption, and higher density than bipolar junction transistors. In addition, the MOSFET can withstand far more power than the JFET.

Chih-Tang Sah and Frank Wanlass of Fairchild Semiconductor developed the complementary MOS integrated circuit (CMOS) fabrication technology for MOSFETs in 1963. This process was designed for semiconductor devices. In 1967, Simon Sze and Dawon Kahng were the first people to declare the existence of a floating-gate MOSFET publicly. Researchers Yutaka Hayashi and Toshihiro Sekikawa from the Electrotechnical Laboratory were the ones who first successfully showed a double-gate MOSFET in the year 1984. The research that led to the development of the 3D non-planar multi-gate MOSFET known as the FinFET (fin field-effect transistor) began in 1989 at the Hitachi Central Research Laboratory under the direction of Digh Hisamoto and his team.

FETs can be made from various semiconductors, but silicon is the most common material used in construction. The vast majority of FETs are produced by traditional bulk semiconductor fabrication processes, with a single crystal semiconductor wafer functioning as the active portion or channel of the device.

In thin-film transistors and organic field-effect transistors (OFETs), which are based on organic semiconductors, some of the more unusual body materials include amorphous silicon, polycrystalline silicon, or other amorphous semiconductors. Additionally, OFET gate insulators and electrodes are frequently made of organic materials.

The high gate-to-drain current resistance of field-effect transistors, which is on the order of 100 M or higher, provides a high degree of isolation between the control and flow of the circuit. It is common practice to use field effect transistors (FETs) instead of bipolar junction transistors (BJTs) in noise-sensitive electronic equipment such as tuners and low-noise amplifiers for VHF and satellite receivers. This is since the noise from the base current will increase as the shaping time progresses. It has a tolerable level of radiation exposure. It does not exhibit any offset voltage even when the drain current is at zero; thus, it functions very well as a signal chopper. In most cases, it possesses superior thermal stability compared to a BJT.

There is no further power requirement once the gate is closed or opened because the gate charge regulates the FETs. In contrast, a bipolar junction transistor or certain states of non-latching relays might result in the opposite situation. As a result, switching is made possible with incredibly little power, which permits further circuit downsizing by lowering the heat dissipation needs sometimes associated with other types of switches.

Compared to a bipolar junction transistor, a field-effect transistor has a gain–bandwidth product with a comparatively low value. MOSFETs are extremely vulnerable to voltage overloads; as a result, they require careful handling during the installation process. Due to the fragile insulating layer that sits between the gate and the channel in a MOSFET, the device is susceptible to electrostatic discharge and shifts in threshold voltage when handled. After the component has been appropriately wired into the circuit, this is typically not an issue that arises.

Because of this, designing FET circuits frequently needs to be highly cautious, and they often include trade-offs between switching speed and power consumption. Because there is a trade-off between the voltage rating and the “on” resistance, high-voltage FETs have a relatively high “on” resistance, resulting in higher conduction losses. 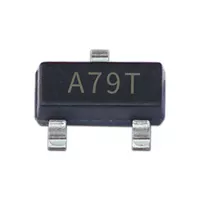 This Alpha & Omega Semiconductor AO3407A power MOSFET can switch between electronic signals and amplify them. It can dissipate up to 1400 mW of power.

We hope you gain some insight into the transistor mentioned above. Leave your questions or comments below, and we’ll do our best to answer them.

If you need to purchase AO3407A or any other electrical component, don’t hesitate to contact us here at ICRFQ. We have a reputation in China as the best electronic distributor.