There are several power-constrained applications, each of which can select the optimal solution from among the available low-power possibilities. Each choice results in a notable decrease in the system’s overall power consumption while improving its dependability. In the following paragraphs, you will learn about the apparatus that was just described. But before we go any further, let’s learn about CMOS and its electrically-erasable memory.

PLD stands for “Programmable Logic Device.” An electronic component known as a programmable logic device, or PLD, is utilized to construct digital circuits that may be reconfigured. A PLD, on the other hand, has an undetermined function at the time it is manufactured, in contrast to digital logic, which is built using discrete logic gates that have predetermined functionalities.

Ways that PLDS Maintain Their Configuration

PLDs combine logic and memory functions into a single chip. The chip’s memory is where the programmed pattern is kept for later usage. PLDs make use of nearly every technique developed for storing data in ICs. For example:

We can create a connection or silicon anti-fuse by delivering a voltage across a section of silicon that has been changed inside the chip. Their name comes from the fact that anti-fuses function in the opposite direction of traditional fuses, which start as connections and are only severed by an electrical current.

Memory stored in SRAM, or static RAM, is erased once the power is cut. Therefore, whenever you turn on the circuit, you’ll need to reprogram an SRAM-based PLD. Typically, this is handled automatically by a different section of the circuit.

An EPROM memory cell is a metal-oxide-semiconductor field-effect transistor (MOSFET) that permanently stores an electric charge on its gate electrode. A PAL developer is the one responsible for this. It takes years for the charge to dissipate, and the only way to get rid of it is to use an EPROM eraser, which exposes the chip to intense ultraviolet light.

When the power is turned off, the data stored on flash memory will still be accessible. It is kept in erasable and reprogrammable floating-gate MOSFET memory cells. This makes it suitable for PLDs used in prototypes, which may require frequent reprogramming. In the same way that EPROM stores data utilizing trapped electric charges, flash memory uses these charges to keep data. As a result, data stored in Flash memory can be kept for years, though perhaps not as long as in EPROM.

In 2005, CPLDs were mostly non-volatile and could be rewritten using an electrical current. Since their size precludes the need for constantly reprogramming internal SRAM cells at startup and EPROM cells are more expensive due to their ceramic container with a quartz window, ROM and RAM are typically used instead.

As the name suggests, fixed logic devices have predetermined circuits that only carry out one task or set of functions and cannot be modified after they have been made.

It can take several months to over a year, depending on the complexity of the device, to proceed from design to prototypes to the final manufacturing run with fixed logic circuits. Furthermore, a new design must be created if the gadget does not function effectively or if the needs alter.

Programmable logic devices (PLDs) are commonly available, off-the-shelf components that provide purchasers with a wide selection of logic capacity, features, speed, and voltage characteristics. PLDs can also be reprogrammed to do a wide variety of functions.

Using low-cost software tools, rapid prototyping, simulation, and testing can be accomplished with programmable logic devices. Once a plan is finalized, it may be easily transferred to a device via programming and tested in a real-world setting. In this case, the PLD is a network router, DSL modem, DVD player, or vehicle navigation system, and it is the same PLD used in the final production run. Compared to the time and money required to create a custom fixed-logic device, there is no NRE expense, and the design is finished significantly faster.

During the design phase, customers can make as many changes to the circuitry as they like using PLDs until the design operates to their satisfaction. This is because PLDs utilize re-writeable memory technology, allowing for design modifications with simple reprogramming. Customers can begin mass manufacturing as soon as the design is complete by loading the final software design file onto as many PLDs as needed. 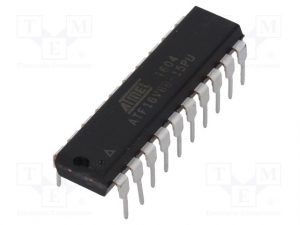 This is the end of this article. We hope you found the information about ATF16V8B-15PU useful and helpful to your projects. If you have any questions, please post them in the comment sections below.

Contact ICRFQ for additional information about the ATF16V8B-15PU. When it comes to distributing electronic components, nobody does it better than us.