The ATMEGA168A-PU is a high-performance 8-bit AVR RISC-based microcontroller that combines a 16kb ISP flash memory with the following: three flexible timer/counters with compare modes, 32 general purpose working registers, serial programmable USART, internal and external interrupts, a byte-oriented 2-wire serial interface, read-and-write capabilities, 512B EEPROM, 23 general purposes I/O lines, SPI serial port, 6-channel 10- The voltage range of operation for the gadget is 1.8 to 5.5V. By carrying out many strong instructions within the course of a single clock cycle, the device can reach throughputs that are close to 1 MIPS per MHz, striking a healthy balance between power consumption and processing performance. 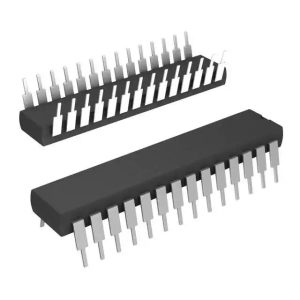 What are AVR Microcontrollers?

AVR microcontrollers are utilized in a wide variety of embedded system applications. Because they are included in many of the open hardware development boards produced by Arduino, they are particularly common in embedded systems used in educational environments and those catering to hobbyists.

Vegard Wollan and Alf-Egil Bogen who were both students at the Norwegian Institute of Technology (NTH), were the ones who came up with the idea for the AVR architecture.

According to Atmel, the name AVR is not an abbreviation and does not stand for anything in particular. Neither of these things is true. There is no clear explanation provided by the developers of the AVR regarding what the letters “AVR” stand for. On the other hand, the acronym AVR is often understood to stand for “Alf and Vegard’s RISC processor.” Please note that throughout this essay, the term “AVR” will often refer to the RISC 8-bit range of Atmel AVR microcontrollers.

When Bogen and Wollan were still students, the first version of the AVR MCU was being created at a local ASIC firm in Trondheim, Norway. This house was once known as Nordic VLSI and is now known as Nordic Semiconductor. It was offered as a silicon IP/building block and was referred to as a RISC (Micro RISC). Nordic VLSI was the company that manufactured it. When Nordic VLSI sold its technology to Atmel, the internal architecture was further developed by Wollan  and Bogen at Atmel Norway, a subsidiary of Atmel. This took place after Atmel purchased the technology from Nordic VLSI. The designers collaborated extensively with the people responsible for writing the compilers at IAR Systems to ensure that the AVR instruction set allowed for the effective compilation of high-level languages.

The AT90S8515 was one of the earliest products of the AVR family. It comes in a 40-pin DIP box and has the same Pinout as an 8051 microcontroller, which includes an external multiplexed address and data bus. The only difference between the 8051 and the AVR was in the polarity of the RESET line; the 8051 has an active-high RESET, whereas the AVR has an active-low RESET. Other than that, the pinout was the same.

1997 was the year that saw the debut of the AVR 8-bit microcontroller architecture. Atmel had shipped a total of 500 million AVR flash microcontrollers by the year 2003. In 2005, the Arduino platform, designed for relatively straightforward electronic projects, was made available to the public and contained ATmega8 AVR microcontrollers.

Atmel Virtual microcontroller is what is meant when referring to an AVR. Atmel, a semiconductor corporation headquartered in the United States, is the manufacturer of this particular line of microcontrollers. The company began operations in 1984 and has since developed into one of the most successful producers of microcontrollers. Annual sales of more than 100 million units demonstrate the company’s continued success. The AVR range of microcontrollers is their flagship product. These microcontrollers can be used in various products, including consumer electronics and home appliances.

Why Use AVR Microcontrollers?

AVR microcontrollers are both inexpensive and simple to work with, which is the primary driver behind their widespread use. They are simple to work with because the C programming language can be used to write their code. In addition, they have a highly compact design, resulting in low overall weight and making them easy to transport.

How Do You Program An AVR Microcontroller?

We hope that reading this post has provided you with some helpful information. If you want to learn more, check out our website because it contains great content. Feel free to post any questions regarding this article or any other article on our website in the comment sections below, and we will do our best to answer them.

Contact us at ICRFQ, your leading electronic component distributor in china, if you have any queries or want to order ATMEGA168A-PU, and we will ensure you get the best product at the best price possible.