Everything You Need to Know About ATtiny85 Microcontroller 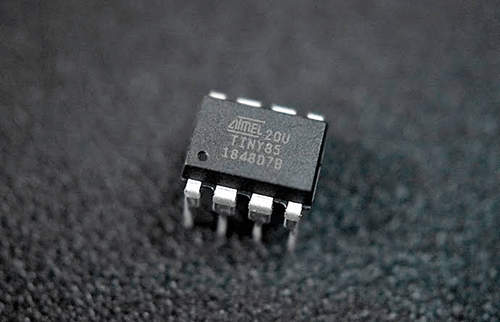 What is an ATtiny85 Microcontroller?

The ATtiny85 Microcontroller is a high-performance 8-pin AVR microcontroller based on the RISC advanced CPU architecture. It comes in two package kinds that can be used to interact with and control a variety of devices and sensors. It uses little power and is compact, having an 8-Kbyte program memory, an EEPROM, and 512-Kbyte RAM for storing the code of the provided instruction.

The watchdog timer is widely used in embedded and automated systems, which is the microchip’s key safety function. It’s a popular microcontroller with a lot of functionality. It’s a tiny microcontroller that can run a variety of program codes.

It’s also known as a little Arduino chip having a limited number of I/O pins, flash/program memory, SRAM, and EEPROM. Instead of using the ATmega328p or Arduino board for a simple code, the ATtiny85 microcontroller chip is used. Three analog input pins are used from these limited I/O pins to collect input from sensors. 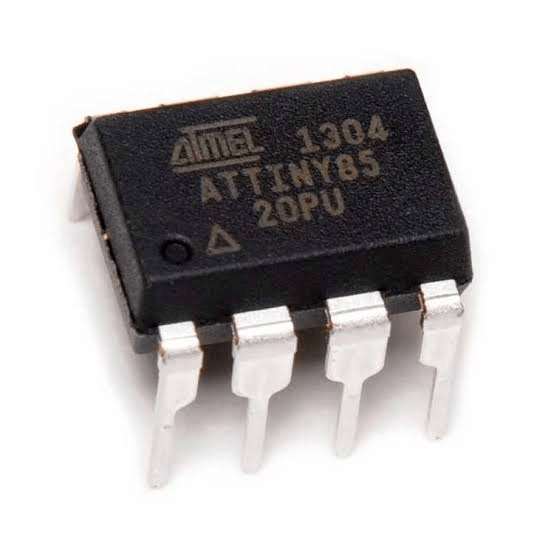 ATtiny Microcontroller Specifications are as follows

The ATtiny45 Microcontroller is a popular and inexpensive 8-pin AVR controller with RISC advanced architecture that can be programmed using the AVR IDE. It has 4 Kbytes of program memory. It can be utilized in mobile embedded systems because it offers multiple power-saving modes. It has a low-power controller that gives outstanding performance. 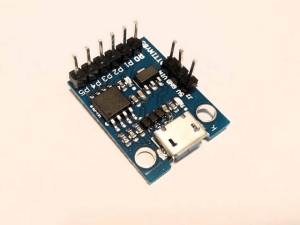 The pinout of the ATtiny85 is described below:

It’s for analog pin ADC0, which is used with analog sensors.

It’s for a crystal oscillator XTAL1 and an analog pin ADC3.

It is utilized for analog pin ADC2 and crystal oscillator XTAL2.

It should be connected to the Ground.

This pin serves as a MOSI connector (Master Out Slave In). It can be utilized as a master line for SPI communication and an SDA line for I2C communication.

MISO is the function of this pin (Master In Slave Out). It can convey data to the master through a slave line.

This can be used as SCK and SCL for SPI and I2C communications.

A detailed description of the pins

The ATtiny85 has two pins for power. The power supply is connected to one, while the Ground is connected. The ATtiny’s power source must not exceed the rated voltage.

ATtiny85 has one interrupt pin. This pin can be controlled by any sensor output or manually via a button.

The SPI pins on Attiny85 are:

Attiny85 also supports the I2C communication protocol. A single line delivers and receives data via this protocol, while another line provides a clock pulse that keeps data in sync with the time. The I2C pins are:

Timer 0 and Timer 1 are two timers on the ATtiny85 to count the clock pulses. These two clocks use the internal clock, although an external clock pulse can control the Timer 0.

Both of these timers are 8-bit. The pins for the Timers are:

The abbreviation PWM stands for Pulse Width Modulation. There are four PWM channels on the Attiny85.

Several specific pins on the Attiny85 can be utilized with the internal PWM signal input to drive external power efficiently.

The Dead Time Generator is a set of pins that function according to a specific time until it approaches zero; the timer counts and compares the value.

Timer 0 and Timer 1 are utilized in ATtiny85 to count two dead generator values, and the output signal is non-overlapping.

The Attiny85 features an inbuilt analog comparator that can compare analog signals in both inverted and non–inverted modes. The comparison outcome is kept in the register and can be utilized for other reasons. Attiny85 has the following analog comparator pins:

In Attiny85, there are four analog input channels available.

The analog signal is transformed into a digital signal with a 10-bit resolution. ATtiny85 translates analog data at a pace of 65-260us, which is fast enough to update the system every second.

The analog input voltage is determined by the power supply voltage, which may result in external device problems. To eliminate this error, an analog reference pin is employed. As a result, the system receives information regarding the voltage reference’s maximum and minimum voltage levels. The reference and analog input voltage should not exceed the controller’s maximum power handling capacity. Analog pins consist of:

External and internal resets are available on the Attiny85. This can be done from an external pin or on a specific condition applied by the software.

The controller contains numerous modules, each of which operates independently on registers. You can read the datasheet for more details on their programming registers.

The controller comprises several modules, each of which operates on its registers. More information about their programming registers may be found in the datasheet.

In most microcontrollers, it is one of the best resetters. Only instructions will be supplied to activate it at the program’s start. It will not affect the controller unless it stops working, at which point the watchdog timer will reset the ATtiny85 and restart it.

Although we discussed SPI programming for the PIC in SPI pins, a debug pin will be utilized to program any controller using the SPI protocol. This pin will cut the program instructions from the CPU and then program the non-volatile memory. The use of a debug pin will be limited to the presence of SPI pins on the controller; otherwise, it will be useless.

The ATtiny85’s output pairs of PWM allow the controller to manage the external control switches safely. It uses a PWM pulse and a zero check with the Dead Time Generator to ensure the counter is complete. The Dead Timer Generator aids in non-overlapping output.

The ATtiny85 is utilized in various embedded applications, and when programmed with the Arduino IDE, it can do a variety of tasks. It has fewer pins, is less expensive, and consumes less power overall.

Overall, the ATtiny85 is a cost-effective and efficient microcontroller that fits your technological requirements.

For more details on ATtiny85 microcontroller, contact us at ICRFQ, we manufacture the best electrical components in China.