Everything You Need To Know About Braking Resistors 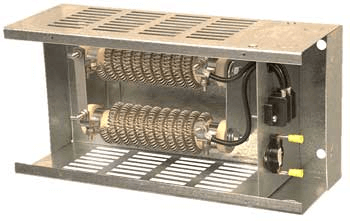 Cranes, Lifts, Elevators, wind turbines, and electric locomotives require precise speed control. Because braking resistors are the most commonly used high-power resistors in electric motor drives to control their speed in industries like transportation, maritime, and construction, they are essential for these applications.

Because electric trains are recyclable and regenerate energy, they are preferred over diesel trains. When these trains stop or slow down, they release a large amount of energy, which can be recovered or dissipated. As a result, a series of braking resistors are integrated into an electric train’s engine system for brakes.

As a result, during dynamic train braking, kinetic energy can be converted to electrical energy at the traction motors of the engine system. The generated energy can be dissipated in the train’s car body via an onboard sequence of braking resistors. Reliability, Durability, and safety are all essential factors in the growth of braking resistors. As a result, this article provides a quick overview of how a breaking resistor works and how it can be used. But before we get into the rest of our topic, we need to understand what VFD is.

What is a Variable Frequency Drive?

Why should I use a Variable Frequency Drive?

One of the benefits of Variable Frequency Drives is that if you have an application that does not require full speed, you can save energy by managing the motor with a variable frequency drive. VFDs let you match the motor-driven equipment’s speed to the load demand. This is impossible to achieve with any other AC electric motor control technique.

Electric motor systems account for more than 65 percent of total energy consumption in today’s industry. Installing or upgrading to variable frequency drives (VFDs) can reduce the power consumption in your institution by up to 70%. Furthermore, the use of VFDs improves product quality while lowering production costs. Returns on investment for Variable speed drive installations can be less than six months when energy efficiency tax incentives and utility rebates are combined.

If you run your motors at the most efficient speed for your application, you’ll make fewer mistakes. As a result, your company’s production levels will increase, resulting in higher revenues. Jerks on conveyors and belts can be eliminated, allowing for higher throughput.

When your equipment is controlled by VFDs, which ensure optimal motor application speed, it will last longer and have less downtime due to maintenance. Because of the VFD’s precise control of the motor’s frequency and voltage, your motor will be better protected from phase protection, electro thermal overloads, under-voltage, overvoltage, and other problems.

What is Braking Resistor? 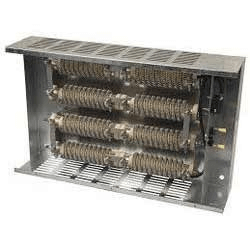 A braking resistor is a resistor that generates a braking torque to slow or stop the speed of a mechanical system. These resistors are built to certain specifications, such as average braking power and resistance. Braking resistors with lower ohmic values will aid in controlling a motor’s speed and dissipating more heat.

These resistors are more durable and require less maintenance. As a result, resistors are frequently used to control motors instead of friction brakes. A braking resistor is needed when the drive trips frequently due to overvoltage, high maintenance costs, decreased equipment life or motor and drive damage, and overheating. Resistors, in general, are heat-generating devices that are used to slow or stop mechanical systems.

The braking resistor’s working principle aids in stopping or slowing down a motor by dispersing surplus voltage generated by a decelerating electric motor. The resistor can handle this dissipated energy, ensuring that the increased voltage is kept at safe levels to prevent damage to the drive. So that device life can be extended, faster braking can be achieved, and the risk of overheating is reduced.

The braking resistor works on a very simple principle. When the motor is turned on, it draws a lot of current from the power supply. To bring the load connected to the motor to a halt, open or close the motor’s supply. The load will accumulate energy due to this brief interruption in the power supply. What causes this to happen? A motor functions as an inductor rather than a resistor when it comes to a complete stop.

When an inductive load, like a motor, is abruptly disconnected from its power supply, it takes some time for the stored energy to be discharged back into the power source. If there is no way to discharge this energy during this time, it can cause severe destruction to the equipment connected to that load and physical harm to anyone nearby. We use braking resistors with loads like motors that require immediate stopping when running at high speeds to avoid such situations. A breaking resistor assists in the braking of a motor in this way.

The braking resistor aids in the discharge of stored energy, thereby preventing damage.

Are Braking Resistors that Necesary?

Motor control system use braking resistors to prevent nuisance faults and device damage in a VFD (variable frequency drive). They’re necessary because, in some situations, the VFD-controlled motor acts as a generator, with power flowing back to the VFD rather than to the motor. When an overhauling load or the drive is used to decelerate the motor, the motor will function as a generator. If the energy generated is not dissipated, the drive’s DC bus voltage will rise, resulting in over voltage faults.

There are a few basic methods for dealing with a motor’s energy. First, the drive’s capacitance will allow it to absorb some of this energy for a short time. This is usually the case when overhauling loads aren’t present and a quick deceleration isn’t required. A braking resistor can be used if the energy generated during certain parts of the duty cycle is too much for the drive alone.

The excess energy will be dissipated by transforming it to heat across a resistor element in the braking resistor. Finally, if the motor’s regenerated energy is constant or the duty is high, a regen unit instead of a braking resistor may be more advantageous. This protects the VFD from hardware damage and nuisance faults while allowing the user to capture and reuse the electric power rather than letting it escape as heat.

Brake resistors are used in conjunction with a thermal switch to sense a potential overload condition. When a brake resistor becomes overloaded, it attempts to dissipate more heat than intended. In this case, the thermal switch can be turned off once the resistor temperature reaches a dangerously high level. The following two diagrams are implemented by stopping one of the high voltage supplies to either the resistor or the VFD. 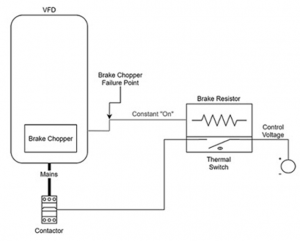 The thermal switch in the circuit above opens up in intense heat. The main contractor’s control voltage may be disrupted. As a result, the main contactor is opened, and the power supply to the VFD is disconnected. 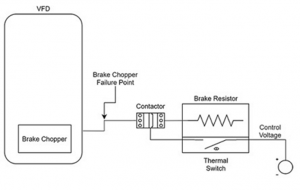 Extreme heat will cause the thermal switch to open. It is possible to interrupt the control voltage used to close the contactor toward the braking resistor. As a result, the contactor opens, disconnecting the power to the resistor while the VFD continues to run.

When a DC motor is disconnected from the power supply, it behaves like a generator. Their permanent magnets are the reason for this. A power resistor can be used as a load to dissipate the energy generated.

It’s crucial to remember; motors comprise rotating magnetic fields within the stator that cause a magnetic field to form. That’s why braking resistors come in handy when the motor’s speed exceeds the VDF’s set speed or when rapid deceleration is required. Even when the torque is increased, braking resistors provide controlled braking. When the rotational velocity surpasses the synchronous velocity, it will start to act as a generator. Furthermore, the energy surplus will be fed into the VFD.

In other words, if the speed difference between the motor and the drive is greater, more energy will be fed back. As a result, experts advise selecting the appropriate braking resistor size. The motor will stop faster if the ohmic value of the resistor is lower. To solve this problem, the braking resistor must be increased in size. The designer calculates the resistor’s power rating to ensure it stays within the set temperature limits during braking.

What Makes A Breaking Resistor Different From A Bypass Resistor?

To avoid the current surge that occurs when a coil is de-energized, a braking resistor is used in conjunction with a contractor. The resistor reduces the current surge by limiting the back emf. This is probably not necessary for most applications, but it does help to extend contactor life.

A bypass resistor is usually installed across a drive to reduce the voltage applied to the motor during startup. This prevents the drive and motor from overloading when they start up.

What Is A Dynamic Braking Resistor? 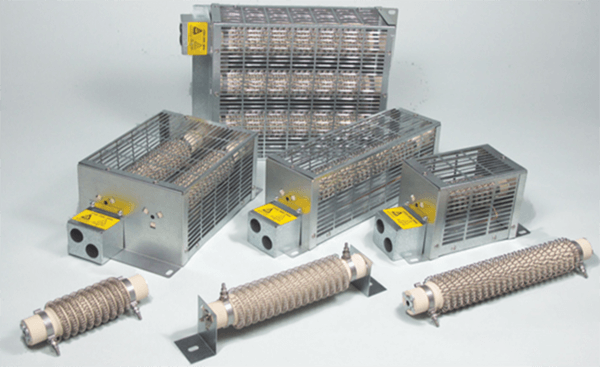 By transforming the braking current produced by the motor during deceleration into heat energy through the braking resistor, the inverter can be operated safely and reliably.

When the power goes out, the braking resistor dissipates the motor’s residual kinetic energy, preventing the machine from being damaged.

Advantages of the Braking Resistor

● It protects a VFD from faults.

● These resistors allow for faster and more precise braking.

● The industrial sector is the most common application for these resistors.

● Experts prefer these resistors because they are more suitable for a wide range of braking mechanisms.

● If it is not adequately cooled, it will deteriorate the component’s base material, causing it to fail prematurely.

The following are some of the uses for braking resistors.

The ohmic values of brake resistors are low, and the power rating is high. As a result, they are favored over friction braking systems. They maintain safe levels of motor voltage, reduce component wear and tear, and allow AC and DC motors to brake more quickly. Braking resistors are commonly used in small motion systems but can also be used in larger trams or trains.