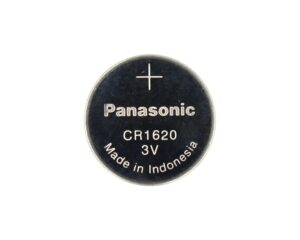 Battery replacement is an issue that comes up often.

Let’s say you are using a 1616 battery but it is no longer easily available when you need it.

You will have to get a perfect replacement.

And one of the possible replacements is 1620.

Will the replacement work perfectly?

Other than fitting into the battery compartment, will it deliver the same performance?

These are just some of the issues that we are going to discuss in this article.

We will also guide you on how to choose the best replacements for the 1616 battery in China.

Well, this is a lithium coin cell battery that is used for a wide range of applications.

The battery is small enough to fit into different portable devices such as calculators, heart rate monitors, keyless entry, and toys among many others.

To understand the performance, let’s highlight the key technical features of the 1616 battery.

-Type: 1616 battery is a lithium coin/button cell battery. This implies that lithium is the main chemical component that provides power. Generally, lithium is highly rated in the battery market, so you should expect exemplary performance from this coin battery.

-Shelf-life: The battery has a shelf life of up to 8 years. It can hold or store its power without draining for up to a number of years.

-Volts: The battery has a voltage capacity of up to 3 Volts. So, when it comes to replacement, the other battery should be able to provide an equal amount of voltage. Also, the battery has a cutoff voltage of 2.0 volts. This is the maximum voltage that the battery can reach before it starts discharging.

-Temperature range: 1616 battery has a temperature range of between -22 to 140F. This range, it implies that the battery can easily survive and be used in extreme conditions. Perhaps this explains why it is a common feature in military, mining, and medical devices.

-Dimension: In terms of the physical aspects, the 1616 battery measures 16mm by 16mm. This is measured in terms of diameter and height.

-Discharge rate: The standard discharge rate of 1616 batteries is 0.1A However, this may defer from one battery manufacturer to another. A key reason why you should take time to compare the battery specs from different manufacturers.

-Capacity: The battery has a current capacity of 120mAh.

Overview of the 1620 battery 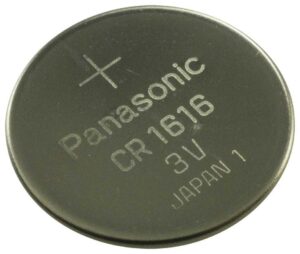 While trying to compare the 1616 battery to the 1620, it will be prudent to look at what you stand to gain from the latter.

CR1620 is a non-rechargeable lithium button battery that should get your attention whenever you are looking for a replacement for the 1616 battery.

It is also used in most digital electronic devices such as remote controls, flashlights, toys, motherboards, and automobile keys timepieces among others.

The battery is manufactured by all major battery brands in the world, and you can easily find its suppliers in China.

So, when it comes to using it as a replacement, you will have an easy time.

So, what do you stand to gain from the CR1620 button cell battery? Let’s look at some of its key features.

-Dimension: As the name suggests, the battery measures 16mm by 20mm. When you are designing a device, ensure that its battery compartment is of this measurement. And when it comes to replacement, the previous battery should also have the same measurement, unless you are ready to do some modifications.

-Voltage: 1620 has a nominal voltage of 3 volts. This is similar to most batteries that fall under the same group.

-Non-rechargeable: Like most button cell batteries, You cannon recharge a CR1620 after it has depleted its capacity. Instead, you will have to replace it.

Now that you know the features of both 1616 and 1620, it is time to consider whether the latter can be used as a replacement for the 1616 battery cell.

To make this decision, you will have to compare their key features.

When it comes to doing a replacement, 1620 wont fit into the space that was used by the 1616 battery. You will have to modify your battery compartment.

From the specifications that we have just discussed, it is clear that 1616 and 1620 have the same voltage of 3V. They also have the same current capacity of 120mAh. So, when it comes to they have the same electric performance. This means that 1620 can replace 1616 based on their performance.

Sometimes weight may also matter when it comes to assessing the replicability of a battery.

Especially for the weight-sensitive devices.

There a very insignificant weight difference between 1620 and 1616. So, the 1620 can easily replace 1616 even for devices where weight seems to matter.

Both 1620 and 1616 are non-rechargeable lithium button batteries. So, you can still use any of the options when you don’t want to bother about recharging.

The cost may also matter when it comes to looking for a replacement for the 1616 battery. The 1620 battery is slightly more expensive than 1616. But the difference is not that big so you should not back out if you ant to replace 1616 with 1620.

From the discussion, you can. The only issue that will arise is their dimensions.

Otherwise, they have the same performance.

And when it comes to buying button cell batteries, ensure that you buy from reliable suppliers in China such as ICRFQ.