Cat6 vs Cat5e: What’s The Difference?

Computer networking is a complex world. There are endless combinations of protocols, standards, and other variables to consider when building out your home or office network. And if you’re like most people, you probably have no idea what half of those things mean.

Fortunately, it doesn’t have to be that way. To get the details on cat5e vs cat6 cables, read on.

You don’t need to be a networking pro to understand the differences between these two network cable types. In this article, we’ll cover everything you need to know about them and when and where they should be implemented in your home or business.

What is a Cat6 cable?

A Cat6 cable is a type of twisted pair Ethernet cable designed for high-speed data transmissions of up to 10 Gigabits per second (Gbps). It’s also backward-compatible with slower speeds like Cat5 and Cat5e.

Cat6 cables are made with four pairs of copper wire twisted around each other. The extra pairs provide more bandwidth and reduce crosstalk, a type of interference that can degrade the signal quality.

What is a Cat5e cable?

Cat5e is short for “Category 5 enhanced.” It’s a type of twisted pair Ethernet cable designed for high-speed data transmissions of up to 1 Gigabit per second (Gbps). It’s also backward-compatible with slower speeds like Cat5.

Like Cat6 cables, Cat5e cables are made with four pairs of copper wire twisted around each other. The extra pairs provide more bandwidth and at the same time minimize crosstalk.

How do I identify Cat6 and Cat5e cables?

Cat6 cables are typically thicker than Cat5e cables, with a larger diameter. The extra pairs require more room, so the overall cable is bigger.

Cat6 cables are also color-coded differently than Cat5e cables. Most Cat6 cables have pairs that are color-coded solid orange and solid green, solid blue and solid brown, and so on. This makes it easy to identify the pairs when connecting your devices.

Cat6 vs Cat5e: What’s The Difference?

To give you a better perspective, let’s now dissect the differences between Cat6 and Cat5e based on  different comparison areas:

When it comes to internet connectivity, we cannot ignore the speed factor. So between these two cables, which one supports higher speed?

So, if you are looking a cable that will support extremely fast internet connectivity, Cat6 will be a better option than Cat5e

PoE is a technology that enables you to power your devices using the Ethernet cable. This is very useful for devices that are not near a power outlet or for devices that consume a lot of power, such as security cameras.

Cat6 cables support PoE technology, while Cat5e cables do not. This means that you can use Cat6 cables to power your devices without having to worry about finding a power outlet.

Bothe the Cat6 and Cat5e have the same maximum length of 100 meters. Beyond this, you will have to use network amplifiers such as repeaters to maintain a strong connection.

However, there is a limit at which each cable can support certain connectivity. And this is where the difference between these two cables comes out clearly.

Bandwidth refers to the amount of information that can be transmitted through a network in a given period of time. Cat6 cables are designed to provide greater bandwidth than Cat5e cables, which is why they are usually preferred for high-performance networking.

So, if your application entails large data transfer within any given time then you will go for the Cat6 cable.

Crosstalk refers to the interference between different signals that are traveling through a network. Both Cat6 and Cat5e are designed to minimize crosstalk for the purpose of a smooth and uninterrupted data transfer.

Both Cat6 and Cat5e are twisted cables whereby the individual cables are twisted into pairs of fours. This means that a  single Cat5 cable will have up to eight wires.

So, in terms of the crosstalk both the cables have the same twisting hence the same performance.

When it comes to the thickness of the cable, Cat6 cables are generally thicker than Cat5e cables. This is because Cat6 cables use thicker insulation, which provides a greater level of protection against interference and crosstalk.

The weight of the cable also plays a role in the decision of which cable to choose. Cat6 cables are slightly heavier than Cat5e cables, which means that they will require more manpower to install. 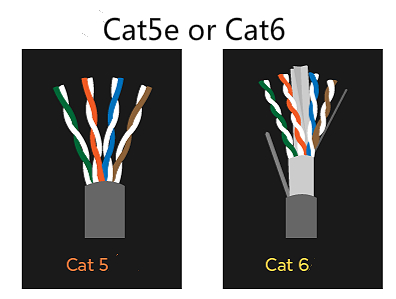 It is also easy to spot some differences in the way that the two cables have been constructed and arranged. For instance, Cat6 cable has a ‘spline’ while Cat5e does not.

A spline is a plastic material positioned at the center of the pairs of cables during its construction. The spline enhances the stability of the cable while at the same time minimizes crosstalk.

So, when you split the cables and spot a spline, then that will be a Cat6 cable.

Despite the differences, there are some similarities between Cat6 and Cat5e cables.

Both cables are designed to minimize interference and crosstalk, they are both twisted, and they both have thicker insulation than Cat3 cables.

Both cables have almost the same maximum length and they can be used to connect devices up to 100 meters away from each other.

Also, both cables are backward compatible with each other. This means that you can use Cat6 cables to connect devices that are compatible with Cat5e cables, and vice versa.

Cat6 and Cat5e  cables also use the same connectors. You can RJ45 on either of these cables and they will both connect to a device. Also, both cables have a molded connector which makes it easier to plug in the cable.

Both Cat6 and Cat5e cables are commonly used in network applications, such as video streaming and gaming.

Cat5 cables are also commonly used in home networks, where they are used to connect devices like routers and switches. On the other hand, Cat6 cables are ideal for commercial applications. This is because they can handle more data than Cat5 cables and they are less likely to suffer from interference.

Can Cat5e and Cat6 be used interchangeably?

Yes, Cat6 and Cat5e cables can be used interchangeably. However, there are some caveats. For example, if you are using a long cable, you may want to use a Cat6 cable instead of a Cat5e cable. Cat6 cables have a longer maximum length than Cat5e cables.

There is no definitive answer to this question. Some people believe that Cat6 cables can improve Internet speed, while others believe that Cat5e cables are sufficient for most applications.

Ultimately, it is up to the individual user to decide whether they want to invest in a Cat6 cable or not. If you have been using a Cat5e and you are keen on a slight improvement, then you can comfortably go for the Cat6 cable.

Can you use a Cat6 cable on a Cat5 network?

Yes, you can use a Cat6 cable on a Cat5 network. As we have said, the cables have backward compatibility, which means that either of the cables can be used in a different network without the need for any kind of modification.

Where to buy Cat5e and Cat6 cables?

There are many places where you can buy Cat5e and Cat6 cables. You can find them online, in retail stores, or even at your local electronics store. You can also buy these cables in China, especially if you want to buy them in bulk. A reliable sourcing agent such as ICRFQ can help you complete the purchase with so much ease.