Everything You Should Know About Computer Liquid Cooling 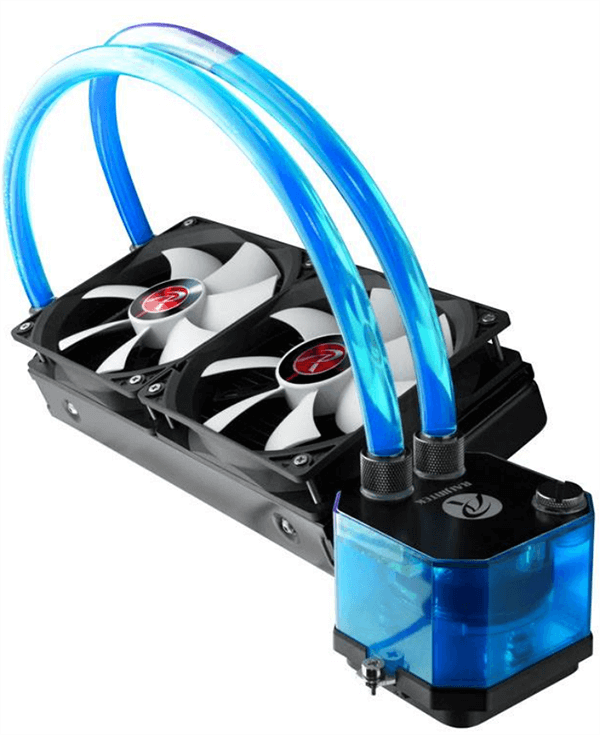 Then there’s liquid cooling. It uses a liquid cooler to keep your processor and GPU cool, but how does it work? Let’s look at what a Liquid Cooled CPU is in this article.

What Is Computer Liquid Cooling

The processors in a computer use liquid cooling as a radiator. A liquid-cooling system circulates a liquid through a heat sink connected to the processor, similar to an automobile radiator. Heat moves from the hot processor to the colder liquid as the liquid travels through the heat sink. The hot liquid is subsequently transmitted to the ambient air via a radiator in the back of the casing. The cooled liquid returns to the components to continue the operation through the system.

Let’s start with some background and explain why liquid cooling has gone from a specialty to a mainstream application. It all boils down to intergenerational increases in electricity use and, as a result, the heat production. This is partly due to a rise in core counts. But it is also related to a preference for performance over power consumption. Thermal Design Power, or TDP, is how powerful a CPU or GPU is. TDP refers to the quantity of heat that the cooler must dissipate under normal operating conditions. A common misunderstanding is that TDP refers to the chip’s maximum power consumption.

Intel’s 10th Generation desktop CPUs typically have a TDP rating of 65W or 125W. AMD’s Ryzen 5000 series CPUs have similar power ratings of 65W and 105W. The basic rule is that a larger TDP indicates more cooling is required; however, as with many things in life, this isn’t always the case. TDP is mostly a benchmark number, as many goods will dissipate far more than their official rating suggests, even under ideal working conditions.

As an example, consider Intel’s 10th-generation Core i9-10900K processor. It has a TDP of 125W in its non-turbo state of 3.7GHz with all cores loaded. The PL1 is the base 125W rating. However, as you’re probably aware, Intel CPUs can ‘Turbo Boost’ too much higher frequencies for brief periods. When it does this, the 10900K can use up to 250W of electricity.

The PL2 limit is set at this point. However, motherboard designers can push these boundaries. A standard 10900K can consume more than 250W or run at PL2 for longer periods. Given all of this, it’s clear that liquid cooling is beneficial for keeping your CPU or GPU cool and for allowing it to accelerate to higher turbo or boost frequencies for maximum performance.

The tables below estimate how much cooling capacity Intel’s 10th Generation and AMD’s Ryzen 5000 series CPUs should have. Of course, a 360mm AIO with a basic quad-core CPU isn’t out of the question. It’d be excessive, but it’ll be nice and peaceful! Running a 120mm cooler on a CPU with a high core count and high TDP is not good, especially if you plan to overclock. Under those conditions, even a 240mm cooler will struggle. 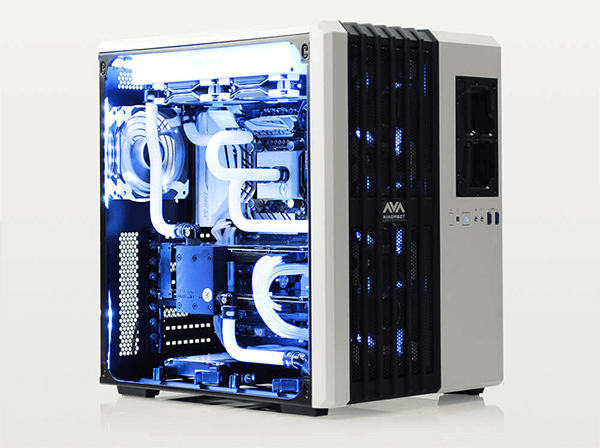 Water has a high thermal conductivity, which means it absorbs heat more readily than air. As a result, it’s an excellent option for cooling your system. Running water over each component transfers heat from each element to a radiator, distributing the heat and keeping the water cool—exactly like your car’s radiator. This improves the cooling efficiency of your processor, graphics card, and other components.

Water cooling is especially beneficial for those who engage in resource-intensive activities such as video editing and gaming. It will keep your hardware cooler under heavy loads (my temperatures dropped by nearly 10 degrees). Still, it will also give you plenty of leeways to overclock your system, allowing you to get the most power out of your components.

However, there are several drawbacks to water cooling. Water cooling has traditionally been a hobbyist-only pursuit, owing to its high cost and complexity (not to mention a bit of risk). You can, however, purchase all-in-one kits, which will cut your costs in half and save you hours of searching for matching parts. You shouldn’t have any problems if you do everything slowly and carefully (and follow the directions to the letter!).

However, I want to be clear that putting water in your computer does endanger your components—even if it’s a little risk if everything is done correctly. Don’t do this unless you’re ready to replace any components if something goes wrong, like overclocking.

Is Liquid-Cooling Your PC Safe?

Adding a custom liquid-cooling loop to your gaming PC is a terrifying concept. There’s always the worry that your entire apparatus will be ruined if it spills. It’s a legitimate concern. Unlike certain high-end handheld devices, PC parts are not waterproof, and we’re taught from an early age that water and electricity don’t mix—presumably so we wouldn’t try to use the boombox in the bath for a mermaid dance party.

However, when liquid-cooling is done correctly, the sense of accomplishment is real. You also get a fantastic computer as a bonus, including enhanced performance, acoustics, and badass looks.

Running liquid through several circuits has several drawbacks, one of which is leaking. It’s possible, however, that it’s not as unlikely as you think

The single most critical rule of creating a water-cooling loop is to take your time and double-check everything. You should secure your fittings but not overtighten them, and unused ports should be secured with stop fittings, but don’t rush the operation.

Another safety guideline for water-cooling a PC is to avoid placing the reservoir immediately above the motherboard or power supply. Filling your reservoir only to have it spill out through the drain port, destroying your expensive parts, is a scenario we can only imagine in our darkest nightmares. To avoid tragedies like this, carefully construct your loop to minimize any possible damage from a leak.

Testing for leaks is also crucial. Always utilize an external supply to power the pump while inspecting for leaks, or bridge your power supply with only the pump connected. Never power any components while looking for leaks unless you enjoy scouring the internet for any evidence of GPU stock. If water gets into an unpowered component, it may be possible to dry it out and keep it functional.

Many people recommend doing a full 24-hour leak test, but I’ve observed that it happens quite quickly after you turn it on when things go wrong. At the absolute least, test for a few hours; you’ll need to do so anyhow to let any trapped air bubbles escape.’

If you adhere to these easy guidelines, water-cooling may be a pleasant and safe hobby. The performance benefits aren’t as significant as they previously were, but they’re still noticeable, and the knowledge gained by building your first liquid-cooling loop is priceless.

Don’t worry if you’re still concerned after considering the risks and decide that creating a bespoke loop isn’t for you. There are other possibilities. If you still want a liquid-cooled PC, you may go with an all-in-one loop for your CPU or even a water block for your GPU—though the latter is normally only worthwhile when used in conjunction with a full loop. Some coolers do an excellent job of lowering temperatures and come factory pre-filled and sealed, with warranties to boot.

What Are the Advantages of a Liquid-Cooled Computer?

CPU (central processing unit) and graphics card speeds have improved over time. CPUs use more transistors, require more power, run at greater clock rates, and generate more heat than ever to achieve the increased speeds. When it comes to transferring heat away from components, liquid cooling outperforms traditional heatsink technology.

As a result, by keeping the CPU and graphics cards within the manufacturer’s temperature limitations, this technology allows CPUs to function at faster rates. Extreme overclockers love this strategy because of its efficiency—in some cases, doubling processor speeds using extremely complicated liquid-cooling rigs.

Another advantage of liquid cooling is that it is quieter. Because their fans work hard to circulate enormous volumes of air, most modern heatsink-and-fan combinations make a lot of noise. Many high-performance CPUs necessitate fan speeds of above 5000 rpm; overclocking a CPU necessitates even greater airflow over the CPU. The “engine noise” generated by this is reduced by liquid cooling. 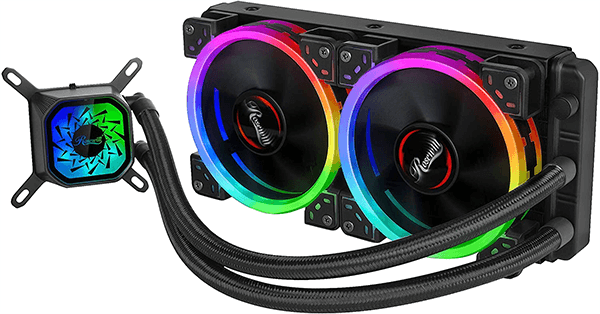 What Are the Disadvantages?

As beneficial as they are, Liquid cooling systems are not without flaws.

Liquid cooling kits need a lot of room inside the computer case to function properly. The impeller, fluid reservoir, tubing, fan, and power supplies must all be able to fit. As a result, liquid-cooled systems necessitate larger desktop computer casings. However, much of the system can be housed outside the enclosure. This takes up valuable space on or near the desktop.

Closed-loop systems have a smaller overall footprint than previous systems, but they still require room. They require adequate space for the radiator to replace one of the case fans. The tubes must also reach from the cooling component to the radiator. Finally, because a closed-loop system only cools a single component, you’ll need two systems to liquid-cool a CPU and a video card.

Installing a custom-built liquid cooling system necessitates a high level of technical expertise. Even if you purchase a cooling kit from a manufacturer, you must still install it. Because each case has a unique layout, you must cut and route the tubes to match your case properly. You risk damaging your system if you don’t get everything properly.

How Do You Install Liquid Cooling?

The backplate, fans, radiator, and pump should be installed and secured. After that, connect all of the cords and turn on your system. Finally, double-check that everything is working as it should, and download and install any software that came with the cooling system.

How Long Does Liquid Cooling Last?

If you don’t have any problems, such as a faulty pump, and take proper care of your cooling system, you should get at least five years.

What Are the Signs That Your Liquid Cooling Is Working?

You can check the temperature of your CPU; if it’s overheating, there’s a problem. You may check the RPM of the cooling pump in BIOS if it is connected to the motherboard. The cooling pump is not working if the RPM is 0 or N/A.’

How Often Should You Change the Liquid Cooling in A PC?

You don’t need to replace the liquid in an All-in-One (AIO) or Closed Loop cooler. They should not be opened because they are sealed systems. According to computer peripheral company Corsair, other cooling systems should change their fluids every 12 months to avoid build-up and preserve optimal performance.

How Do You Change the Liquid Cooling in A PC?

Drain the cooler from your computer and replace any old tubes as needed. A large syringe can inject new coolant into the pump unit and reservoir. Connect the pump to the radiator, seal the tubes, and test everything to ensure it’s working properly.

The computer is becoming increasingly powerful. More cores and higher performance are desirable, but they frequently necessitate increased cooling requirements. A normal air cooler would suffice for most users, but you’ll need something more for a very powerful PC. The solution is liquid cooling.

Like noise and performance, higher temperatures are part of a feedback cycle. Lower fan speeds and noise are associated with more capable cooling. Modern CPUs and GPUs benefit from enough liquid cooling to keep their boost and turbo functionalities working at their peak. In other words, better cooling can lead to better performance.

If you need to know more about computer liquid cooling or planing to purchase them for resell, contact us at ICRFQ. We manufacture the best electrical components in China.