What is a Transformer?

A transformer is a device that uses mutual induction to transmit electrical energy from one circuit to another. It features two magnetically connected and electrically isolated coils, primary and secondary. They change the voltage and current levels without affecting the signal’s frequency.

What is a Current Transformer?

Unlike the voltage or power transformers discussed previously, the primary winding of the Current transformer has only one or a few turns. A single flat arch, a coil of heavy-duty wire wrapped around the core, or just a conductor or bus bar placed through a central hole, as shown, can all be used for this primary winding.

The main winding, which is never more than a few turns long, is in series with the current-carrying conductor supplying a load. The Current Transformer is often referred to as a “series transformer” due to this arrangement.

On the other hand, the secondary winding may contain many coils that wound on a low-loss magnetic laminated core. Because this core has a large cross-sectional area, the magnetic flux density generated by wire with a smaller cross-sectional area is low, depending on how much the current must be stepped down. It attempts to output a constant current independent of the connected load.

Until the voltage induced in the secondary is large enough to saturate the core or cause failure due to high voltage breakdown, the secondary winding will deliver current into either a short circuit, such as an ammeter, or a resistive load.

What is a Potential Transformer? 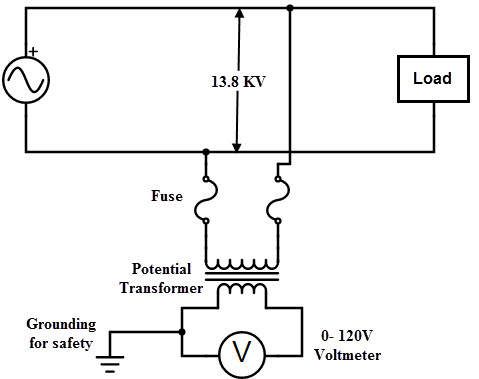 This is an instrument transformer that converts voltage between two values. This transformer reduces the voltage to a safe level that may be monitored with common low-voltage instruments such as voltmeters, wattmeters, and watt-hour meters.

The magnetizing current is minimal because the potential transformer is made with a high-quality core that operates at a low flux density. The transformer’s terminal should be built so that the voltage ratio varies minimally with load and minimal phase shift between the input and output voltage.

Through the primary windings’ magnetic circuit, the secondary windings of the potential transformer are magnetically connected. The transformer’s primary terminal is rated for 400V to thousands of volts, whereas the second terminal is rated for 400V. Transformation ratio, also known as turn ratio, is the ratio of primary voltage to secondary voltage.

C.T. and P.T. transformers’ functions are among the most significant variations. On the one hand, a current transformer decreases a high current to a safer and more manageable level that can be measured. Large primary Currents are converted to little 1A/5A currents that may be monitored with an ammeter.

A potential (voltage transformer), on the other hand, measures and converts high voltage values into lower voltage levels. The high voltage is converted to a typical secondary voltage of 100V or less.

The primary winding is linked to the transmission line, whose current is measured in the Current Transformer, and the full line current flows through the winding. Moreover, the potential transformer is wired in series with the circuit, resulting in full line voltage across the winding.

The transformation ratio is high in a Current Transformer, whereas it is low in a potential transformer.

A Current Transformer is made of silicon steel lamination, but a potential transformer is a high-quality steel that can operate at low flux densities.

You can combine a 5 Ampere ammeter with a Current Transformer to measure large currents up to 200 amperes. On the other hand, a potential transformer allows you to test large voltages like 11KV with a 120V voltmeter.

Finally, current and potential transformer testing guarantee that instrument transformers are in good operating order. It also guarantees that voltage and current stay within their limits. The transformers ensure that your electrical gadgets or home equipment are safe from power surges.

Lastly, for more details on the current and potential transformers, contact us at ICRFQ; we are the best electrical components manufacturer in China.