What’s the Difference between Analog Integrated Circuits And Digital 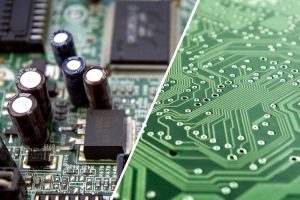 Information transfer is the primary means electronic devices communicate with one another and the physical world. Both analog and digital signals are used to transfer the information being sent. Analog circuits are a type of electronic circuit that can handle any analog signal and generate an output that is also analog. Digital circuits are a type of electronic circuit that are used to process signals that have a discrete amplitude. These signals are also known as digital signals. The signals can be converted, stored, and amplified with analog circuits using a regular waveform.

What is an Analog Circuit?

What is Digital Circuit

A circuit can be digital if the signal can only take one of two discrete values at any given time. Each level can correspond to two distinct states (0 or 1). These circuits are constructed using transistors to produce logic gates to carry out a Boolean logical operation. This logic serves as the foundation for digital devices and the processing of computers. Compared to analog circuits, digital circuits are less susceptible to a decline in quality over time.

Error rectification and detection are more straightforward processes to carry out with digital communications. EDA tools, a type of software that creates the logic in digital circuits, are used by designers so that the process of building these circuits can become more routine. EDA stands for “electronic design automation.”

The waves are transformed into pulse waves by using a digital circuit. It takes measurements of a waveform at a rate of a thousand times per second and records the results in a binary format. For instance, a signal might have a high of 2.4 volts after 12 milliseconds and a high of 2.6 volts after 14 milliseconds. This circuit converts the voltages and timings into binary data, while the waves are changed into a series of ones and zeros, respectively.

When the circuit has to produce sound from a speaker, it produces an op signal that is at 2.4 V after 12 milliseconds and at 2.6 V after 14 milliseconds, which is identical to the wave that was first generated.

The efficiency of a Circuit

The speed at which a circuit can generate results and the amount of electricity it consumes are the primary factors determining the circuit’s efficiency. Before carrying out their functions, these circuits must wait for a wave to finish its full rotation before beginning their work. In addition, they need enough power to create the highest point of the wave.

The speed of the digital circuit is only limited by the gears that make up the circuit; the speed of the indications they are processing is irrelevant to this limitation. Working with very short pulses requires only a marginal amount of electricity. Compared to digital circuits, analog circuits are noticeably slower and consume significantly more power in most applications.

The operation of analog circuits depends on the design of the circuits and the gears within them to ensure that the waveform remnants are faithful to the original. They are susceptible to flaws in the design, changes brought on by the aging of parts, and outside influences like electrical noise. All that is required of digital circuits is to keep the course of their pulses intact. Even if many pulses disappear, it will only impact a small fraction of the thousands of sizes. As a direct consequence, these circuits are more accurate and can repeat their i/ps with a higher degree of precision.

What’s the Difference between Analog Integrated Circuits And Digital

The following is a list of the primary distinctions that can be made between analog circuits and digital circuits:

When developing analog and digital circuits, it is essential to grasp the distinctions, even though there are some parallels between the two types of designs. Because of this, the PCB design will benefit from an efficient layout strategy. The most recent EDA tools come equipped with built-in simulation capabilities, which can be used to examine any potential noise problems in the design. When designing mixed-signal printed circuit boards (PCBs), this becomes a significant advantage, particularly when minimizing the number of board re-spins.

When constructing delicate analog circuits and high-speed digital circuits on a printed circuit board (PCB), there are several considerations to consider. There are a lot of contract manufacturers (CMs) out there, and many have expertise in supporting and creating digital and analog PCBs. They will also handle electromagnetic interference (EMI) concerns and incorporate the regulatory compliance necessary for an effective PCB prototype or assembly. Working with seasoned CMs will be quite beneficial since they are familiar with the various approaches critical for analog and digital PCB design.

As a result, this page covers what analog and digital electronic circuits are and how they differ from one another. We believe you now have a clearer comprehension of this idea. Additionally, if you have questions about this idea or how to perform electrical and electronic projects, kindly provide your insightful comments in the space below.

For more details on digital/analog integrated circuits, contact us at ICRFQ. We manufacture quality electrical components in China.