Everything You Need To Know About Diode Testing

It is common knowledge that a diode is designed to work in a single direction (only allowing current flow in one direction). Under the forward-biased situation, these are expected to have very low resistance for current flow and very high resistance under the reverse-biased condition. This key attribute of the diode can be used to efficiently test the diode to determine if it is functioning correctly. In other words, diode testing can be done by measuring the electrical resistance between its terminals with a piece of equipment like a multimeter.

What Would Cause a Diode to Fail?

Short circuits, Open circuits, and unstable voltage control are the most prevalent causes of diode failure. There may be symptoms among these three sorts of failures. For example, the power supply voltage rises or falls to zero, or the output is inconsistent. As a result, individual faults must be thoroughly investigated during the diode test.

A multimeter is a typical diode measurement tool used for on-circuit (when the diode is on the circuit board) and off-circuit (when the diode is not on the circuit board) measurements. The reverse and forward resistance of the PN junction is measured in the basic concept of diode measurement, and the essential judgment is based on their values. To do well in a diode test, it is required first to comprehend the basic structure and operation of diodes, followed by an understanding of the diode’s primary failure features.

The diode’s positive and negative electrodes have been separated, and the diode’s forward and reverse resistance has become infinite. The circuit is now open once the diode is turned on.

The diode’s reverse resistance decreases, causing the diode’s unidirectional conductivity to be compromised.

The diode has no visible defects in this situation, such as an open circuit or a breakdown. However, the circuit’s stability will weaken when the condition worsens, and the output signal voltage will drop.

What Is a Diode Test?

A diode is a simple two-pin gadget with an embedded electric field that transmits electric current in one way. And the diode arises from semiconductor materials. The device can be used for various tasks, including isolating signals from a source, converting AC to DC, and so on. Furthermore, the diode has two sides—n-side and p-side—that can be doped differently.

Electrons bypass the junction when a positive charge is applied to the p-side and a negative charge is applied to the n-side. The current is only moving in one direction at this moment. With that in mind, it’s critical to remember that one of the diodes’ most important properties is that conventional current only passes from one side to the other. Furthermore, electrons can only flow in one direction, from negative to positive.

So, how do you go about doing a diode test? You can begin by identifying the device’s terminals (cathode and anode). The cathode is at a nearby airport, whereas the anode is on the band’s other side. A Zener Diode’s cathode, for example, is the terminal near the black mark.

However, you can test using several approaches, such as an analog multimeter, a digital multimeter, and so on, which we’ll go into later in this post. What if you want to put a diode you built on your PCB to the test? By removing one of the diode’s leads, you can apply the methods described here.

How to Use a Digital Multimeter to Test a Diode 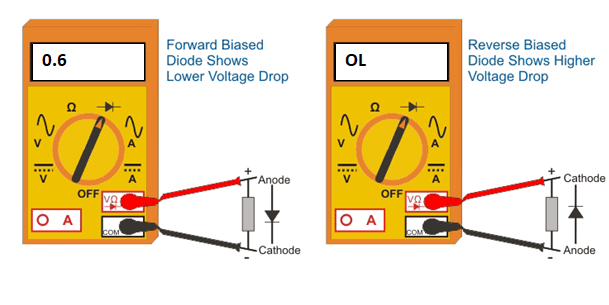 Because it is based on the features of the diode, the Diode Test Mode is the ideal technique to test a diode. The diode is placed in forwarding bias, and the voltage drop across the diode is measured using a multimeter in this approach. In forward bias, a usually functional diode will enable current flow and must have a voltage drop.

It is evident from those mentioned above that the Digital multimeter should register some low resistance in the forward-biased position and very high resistance or OL in the reverse-biased condition for the diode to function correctly.

How to Use an Analog Multimeter to Test a Diode 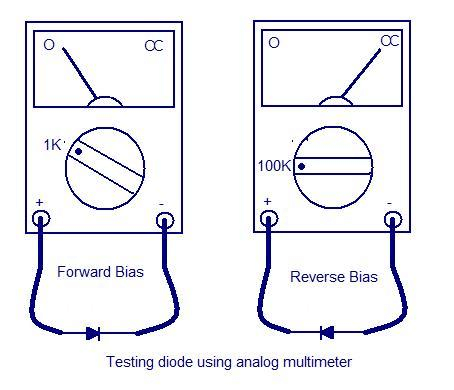 The majority of analog multimeters lack a specialized Diode Test Mode. As a result, we’ll use the Analog Multimeter’s Resistance Mode, which is analogous to utilizing the DMM’s ohmmeter mode to test diodes.

Let’s look at using a digital multimeter to test an LED.

What is the best way to test a Zener Diode?

When compared to testing a regular diode, testing a Zener diode necessitates the use of additional circuitry. Since the Zener diode conducts only when the applied reverse voltage is greater than the Zener breakdown voltage, it is reverse-biased.

If we apply 12V from the battery through a resistor to the Zener diode (with a breakdown voltage of 6V), the multimeter should show a reading roughly equal to the 6V if the Zener diode is healthy.

Last but not least,

Understanding essential electronic components are critical, especially if you plan to create an electronic project. This allows you to detect feLeastatures in both good and bad conditions, which is an essential skill in electronic circuit troubleshooting. To put it another way, if you want the best possible results, you should perform a diode test and double-check that other critical components such as the LED, resistors, and so on are in good working order. You won’t have any problems putting the ingredients together in a PCB.

However, if you decide to put things together before checking the state of the components, it may be hard to identify the issue.

After all, performing a diode test isn’t difficult. However, you must first determine which type of diode you are using. After that, locate the terminals and attach them in the proper order. After that, record the results of your Digital or Analog Multimeter.

For more details on testing diode, contact us at ICRFQ. We manufacture the best electrical components in China.