Everything You Need to Know About Electrical Grid

You don’t think about electrical power until it’s gone, just like you don’t think about air until it’s gone. Power is always “there,” satisfying your every need. Only when you enter into a dark room and reflexively hit the ineffective light switch during a power outage, do you realize how crucial power is in your everyday life. When we don’t have power, we’re confused, saddened, and often at a loss for what to do.

The power grid transports electricity from power plants across the country to homes and businesses. Its extensive power generating, transmission, and distribution network ensures that we can function in today’s environment. The electrical grid provides us with on-demand electricity. Although this grid is an essential part of our daily lives, most people have little understanding of how it works. We seek to demystify our electricity system by describing how it operates, its flaws, and how it might be improved.

What Is a Power Grid and How Does It Work?

The power grid accomplishes three goals: it ensures the most efficient use of energy resources, expands power supply capacity, and improves the efficiency and reliability of power system operations. Each area’s reserve generation capacity, referred to as a spinning reserve, is reduced by connecting the producing units.

The electrical grid is made up of three basic parts.

The process of generating power in a power plant from various sources such as coal, water, nuclear, and so on is known as power generation. The created energy is then distributed to locations where it can be consumed (Consumer).

How Do We Generate Electrical Power?

Electric power plants that use turbines to drive energy generators produce the majority of the world’s electricity. A moving fluid moves a sequence of blades installed on a rotor shaft in a turbine generator: water, steam, combustion gases, or air. The rotor shaft of a generator rotates due to the force of the fluid on the blades. In turn, the generator converts mechanical energy into electrical energy. 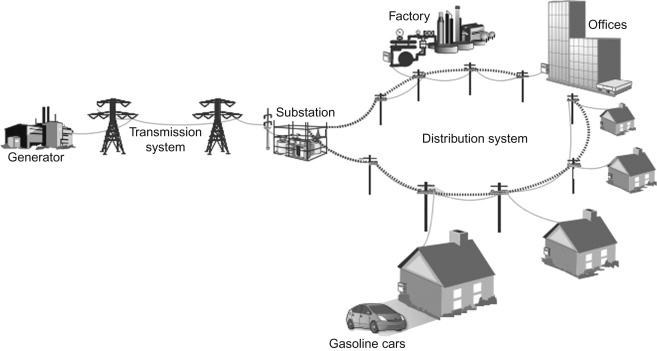 What are the various power-producing sources?

A gas-fired power plant generates electricity by burning natural gas, which is a rapidly developing energy source globally. According to research by the Union of Concerned Scientists, natural gas produces far fewer pollutants than coal or oil while being a fossil fuel. According to data from the International Energy Agency (IEA), gas-fired power generation increased by 3% in 2019, increasing its share of worldwide power generation to 23%.

The number of wind farms has increased rapidly around the world in recent years, owing to technical developments. According to the IRENA, global installed wind-generation capacity onshore and offshore has expanded by about 75 times in the last two decades, from 7.5 GW in 1997 to 564 GW in 2018. After the wind turbines are constructed, the operational expenses of maintaining wind power facilities are modest, and they are generally regarded as cost-effective.

Solar energy facilities use one of the cleanest and most abundant renewable energy sources to turn sunlight into thermal or electrical energy. They don’t require a lot of upkeep and can endure for 20 to 25 years. Between 2018 and 2050, worldwide solar power capacity will grow by 9% per year, from 480 GW to more than 8,000 GW, according to the International Renewable Energy Agency (IRENA).

An electrical substation plays a critical role in the entire process of generating and distributing electricity to houses. Electricity can flow through a variety of substations at various levels from the transmission to distribution. 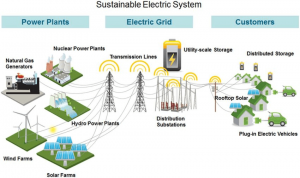 What are the benefits of having a well-functioning grid?

The linked and intricate architecture of the electricity grid gives several benefits, including:

Electricity can be supplied to the correct locations across the country because the grid is such a large network. Because of the vast transmission network, grid operators can deal with foreseen and unforeseen losses while still meeting demand.

The energy grid allows a power system to tap from a variety of resources, even if they are located far away from where the power is needed. Wind turbines, for example, must be constructed where the wind is strongest, and the electricity generated must be distributed via the grid to distant places.

Different generators compete for the lowest price because the system permits numerous generators and power plants to supply electricity to customers. The grid also acts as a type of insurance, as grid competition shields clients from fuel price changes.

In 2003, a historic blackout demonstrated the importance of effective grid transmission. Because of human mistakes, an Ohio power utility caused the world’s largest blackout on August 14, 2003. The blackout affected Michigan, Massachusetts, Pennsylvania, Connecticut, New Jersey, New York, and even sections of Canada. Thousands of people flocked to hospitals, suffering from the heat, and offices had to be evacuated. Since 2003, the electricity grid has come a long way, but there are still numerous areas to improve it.

You can turn on a light or a gadget by flipping a switch at home. Most of the time, the electricity used to power the equipment comes from a massive network known as the electric grid. This is how it goes. Perhaps you’ve constructed an electric circuit using a battery and a light bulb.

The light bulb receives current from the battery via a wire. It then passes through more wire before returning to the battery. You may also use the wires to connect many light bulbs so that some of them can be turned on while others are turned off.

The electric grid operates on a similar principle, but it is more complicated. A whole deal more You don’t think about electrical power until it’s gone, just like you don’t think about air until it’s gone. Power is always “there,” satisfying your every need. Only when you come into a dark room and reflexively hit the useless light switch during a power outage do you realize how crucial power is in your daily life.

The energy grid is a complex and vital infrastructure that is also one of the modern era’s most stunning engineering marvels. It distributes power generated at various facilities, frequently across considerable distances, to end-users. Buildings, industrial facilities, schools, and households all receive electricity from it. It does so at all times of the year, every minute of every day.