The Complete Guide To Electrostatic discharge(ESD) 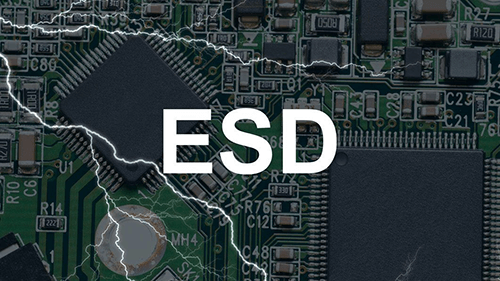 Everyone who works with electronics has heard about electrostatic discharge. Some people know a little more about it, some a little less. But almost nobody knows everything about ESD that they need to keep themselves and their coworkers safe. In this blog post, we’ll demystify ESD and give you the information you need to know about it.

What is an electrostatic discharge (ESD)?

When you walk across a carpeted floor and then touch a doorknob, you’ve just experienced an electrostatic discharge. ESD is simply the movement of electrons from one object to another. In your case, the electrons left your body and went to the doorknob.

So, we can define ESD as an electrostatic discharge is the movement of electrons from one object to another.

What are the causes of ESD?

There are three ways that ESD can happen:

This is the most common way we experience ESD. When you walk across your carpeted floor and touch a doorknob, your body is losing electrons to the doorknob. This leaves you with a positive charge and the doorknob with a negative charge (because it gained electrons). The opposite charges attract each other, so you get zapped when you touch the doorknob.

For example, if you pick up an item off of a table and then touch something else, your body will lose electrons to that thing through what’s called turbocharging.

Tribocharging can also happen if you touch an object that has been in contact with another object. For example, if you walk across the carpet and touch a doorknob, and then touch something else, your body will lose electrons to that thing through tribocharging.

How can I protect myself from ESD?

You need to take steps to protect yourself from ESD to avoid damage to your electronics and yourself. Here are some steps you can take:

If ESD damages your device:

If your device is still broken, then you will need to have it repaired or replaced after all of these steps have been taken.

Don’t forget to reset the device’s factory settings as well after repairing it.

How can I tell that my electronic device or component has been damaged by electrostatic discharge?

Here are some signs that your device has been damaged by ESD:

What is an ESD-controlled environment?

Some examples include computer workstations and testing areas in factories, warehouses, and manufacturing plants. The ESD-controlled environment should also be equipped with a means for removing or avoiding ESD damage to sensitive electronic devices and components. 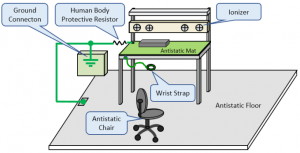 There are two types of exposure to ESD:

How do you discharge ESD?

There are two ways to discharge static electricity:

What can happen if ESD is not discharged?

If ESD is not discharged safely and quickly enough, it can cause:

What is ESD compliance?

ESD compliance means that your computer is designed and manufactured so it can withstand high voltages and static electricity. ESD protection methods are provided in the design stage of a computer and are built into the motherboard, power supply, cables, etc. ESD grounding is required to prevent static electricity build-up inside the computer.

Static electricity builds up when a sudden discharge occurs or static-charged objects come in contact with other objects with high potential (like metal). ESD grounding prevents static build-up inside the computer by providing an adequate path for it to flow out of the machine.

What materials are ESD-safe?

Many materials are safe to be standing on, including hardwood floors, carpeting, and granite countertops. However, you should avoid using any of these surfaces if they have been recently treated with a water-based or oil-based finish.

In some cases, you can use a conductive putty or adhesive to transfer the charge from the surface on which you are standing to the ground under your feet.

Equipment and devices to prevent ESD

There are various devices and equipment that you can use for preventing electrostatic discharge. They include;

-Electrostatic grounding mat: This is a conductive material that is used as a ground for preventing static discharge. This material is placed underneath your work surface to prevent static discharges from happening.

-Static control product: These products help in preventing static charges from occurring on your body when you touch or walk over an electrical device or object that has been charged with electricity

-Static control footwear: This is used by professionals, such as electricians, who need to get close to electrical equipment and objects such as circuit boards with large amounts of electricity flowing through them.

When it comes to the wearable,s buy one that will fit you perfectly.

We have discussed all that you should know about ESD and how to prevent ESD from happening. Preventing ESD is very important because it is a safety hazard that can cause permanent damage to electronic components.

It is also very important for many people, who have to work with computers and other electrical devices daily, such as electricians, computer technicians, and computer engineers.