Everything You Need to Know About Embedded Computer 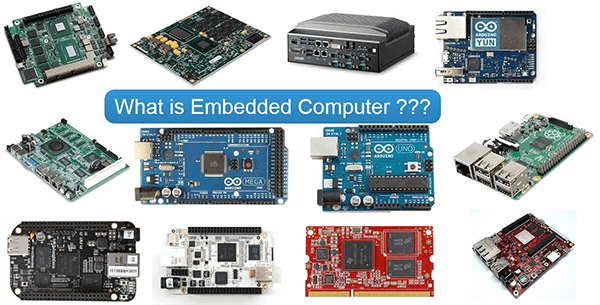 Embedded computers can be found all over the place. They can be found in phones, microwaves, airplanes, automobiles, calculators, and so on. An embedded computer, a critical component of most embedded systems, is a set of hardware and software dedicated to a single task.

For various reasons, laptops and general-purpose CPUs are not considered embedded computers. To begin with, the term “embedded” suggests that the computer is part of a larger mechanical or electronic system. The word “computer” is commonly associated with a self-contained computer. Second, unlike an embedded computer meant to do a single task, a laptop can simultaneously run and download several applications, software, and computations.

What is an Embedded Computer?

Embedded computers, by definition, are computer platforms designed specifically for a single, software-controlled task. They are commonly employed as part of a system or device to complete the single task for which they were programmed, and they are never used alone. You might think of them as a bit of computer designed to perform a single, repetitive task! Embedded computers include single-board computers (SBCs) and microcontrollers (MCUs).

Is it the same thing as Embedded Systems?

For the most part, embedded computers have a tough design. In contrast to a standard desktop or industrial computer, they are frequently fanless. Embedded computers are commonly found in challenging or demanding situations, where temperatures can drop to -40°C or rise to +80°C or more.

The lack of an integrated fan in computers may appear to be an unusual design choice, yet there is a method to the madness. In industrial settings, dirt, dust, moisture, or particles in the air can all interfere with the embedded computer’s internal components. This dust and particulate matter would be sucked in by a fan, coating the insides of the PC with material that could be detrimental to its functioning.

To address this issue, an embedded computer’s aluminium shell, which is sometimes ornamented with fins (or gills), works as a heat sink, dissipating the heat created by the unit without using a troublesome fan design. This fanless design also eliminates the problem of moving parts, which is one of the most common reasons for failure and maintenance in industrial applications.

Embedded computers share many components in a standard desktop or industrial computer’s chassis, despite being designed or purposed for a single activity. Although the CPU, RAM, graphics cards, and storage are all similar components of computing systems, their architecture differs.

For example, suppose an embedded computer will dwell in the Antarctic, processing data from an atmospheric Lidar station and saving it on removable storage devices for later analysis. In that case, it’s not just the PC’s primary components, like the CPU and PCB, that have to endure the sub-zero temperatures. Every element inside that embedded computer must be evaluated and rated for environmental compatibility – after all, if one component fails, the entire system fails. 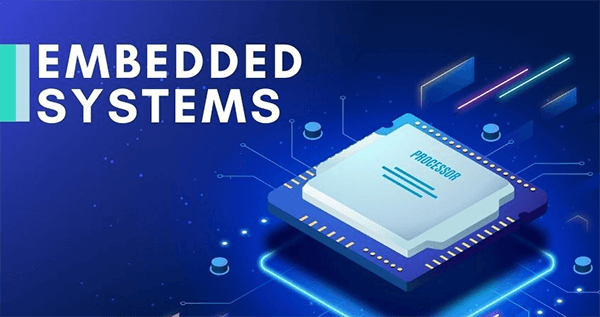 The function and design of embedded computers vary from that of a standard personal computer found in your office. All of the components of embedded computers are soldered onto a single printed circuit board (PCB) or motherboard, leaving little room for expansion or upgrades. In most cases, they are also smaller than normal computers. Most of the time, they may or may not be used with an interface.

On the other hand, regular PCs come with a standard motherboard with several pins and slots, enabling you to insert your processor chip and other components without soldering. Embedded computers and normal computers share many of the same components that make them what they are, except that embedded computers are less powerful.

What’s in an Embedded Computer

In this part, I’ll explain the functions of the various components included in an embedded computer. There are numerous components, but I’ll go over the most important ones with you.

A CPU/MPU is in charge of completing a computer’s computing tasks. A CPU, on the other hand, requires extra storage and I/O components to function. The CPU and all other components (like memory, ram, and more) are placed in a single chip, referred to as an MCU, in embedded computers.

Because of their lesser performance, embedded computers with MCU are less expensive, but their reduced power capacity does not restrict their functionality. Depending on whether the main chip is a CPU or an MCU, different embedded computers perform better for various tasks.

Embedded computers must store data such as configurations, programming data, encryption keys, and other information. Non-volatile memory is the name for the sort of memory that holds such data.

RAM (random-access memory) is required for the embedded computer to store data that needs to be accessed quickly. In contrast to the memory mentioned above used for storing, RAM uses volatile memory, which means that the data stored in it is erased every time the system is shut off. In general, the more RAM an embedded computer has, the more responsive and speedier it will be.

Most embedded computers have a variety of I/O ports that allow them to connect to new and old technology and devices and sensors and the internet.

Performance accelerators are built into some embedded computers to help them run faster. They aren’t necessary, but they can help you perform better! GPUs, VPUs (Vision Processing Units), FPGAs (Field Programmable Gate Arrays), and NVMe Computational Storage Devices are the most frequent (CSDs). One of these will be great if you need a performance increase for your AI, machine learning, or deep learning applications.

Embedded computers might be low-power or high-power, but they all need a cooling function to keep calm and avoid thermal throttling. Heat is dispersed through it to the outer casing, dispersing the heat into the environment, and embedded computers are generally passively cooled via heatsinks.

What Are Some Examples of The Types of Embedded Computers?

GPU-accelerated embedded computers are well-suited to intelligent video analytics, as well as heavy processing and graphics-intensive edge applications. To farm these terabytes of video data and transmit it all up to the cloud would be costly and wasteful if you have an A.I.-based system that records high-definition video and analyzes it (let’s say facial recognition).

GPU-accelerated embedded computers can gather and analyze that data directly at the edge, sending only the relevant information to the cloud for warnings and reporting, which might be as little as a few kilobytes.

Multi-media embedded computers, classified as ‘light-industrial,’ are often utilized in a more benign environment. They keep all of the industrial concepts in place but don’t require a wide range of temperature capabilities or a large number of I/O. The objective is to have more high-resolution display outputs, and a small footprint is frequently preferred to fit behind digital signage screens.

In-vehicle PCs, also known as ‘MDTs’ (Mobile Data Terminals), must be able to withstand just about anything that can be thrown at them. These include extremes of temperature where storage is concerned, frequent and high levels of vibration – and be powered by the vehicle’s electrical supply, which is typically ‘dirty’ in terms of voltage spikes and electrical noise.

Emergency response vehicles are the most outstanding examples, such as police cars, ambulances, and fire trucks. They are constantly on the move, at high speeds, and often through difficult terrain. The environment in which these vehicles operate necessitates fast, “always-on” connectivity, which is usually provided by cellular connectivity (3G, 4G, and 5G). Furthermore, the vehicle PC may be required to manipulate, store, and send (as a Network Video Recorder) large amounts of data, like video feeds, in real-time during crucial situations for feedback and assistance – and, ultimately, decision making.

Industrial IoT gateways lie on the network’s edge, providing device connectivity and northbound data while speeding up integration and simplifying overall management. These specialized devices, which focus on connectivity and processing, are excellent for edge applications requiring a small amount of computational capacity, IT and OT protocol compatibility, and a WAN connection, typically by cellular or Wi-Fi. 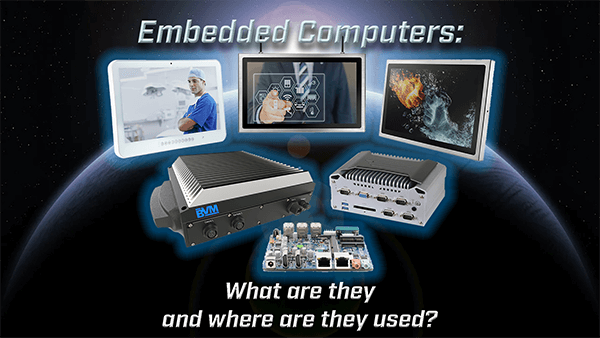 Why Use Embedded Computers for Embedded Systems Applications?

Why not just do the job on an ordinary PC, you might think? Embedded computers are meant to work alone or as part of a larger system to perform a specific activity. Due to this, they offer numerous benefits for industrial, agricultural, and even military embedded applications.

Because embedded computers are designed to run 24 hours a day, seven days a week, they usually come with components that have previously been tested to fulfil government reliability criteria. As a result, you won’t have to worry about your embedded computer dying soon because it’s built to last.

Some embedded computers are also built to work in demanding applications and harsh locations, such as outdoor rocky terrains with extreme weather. They’re resistant to high-pressure water and dust, as well as harsh temperatures.

They can be used in various applications due to their modest size. It also makes them portable, allowing them to be used outside

They also come with dedicated software that is light and easy to use. They can function with very little power because of these features. As a result, the cost of running embedded computers is far lower than that of a normal PC.

These are some of why embedded computers are so popular in embedded applications. You could claim they were made for this exact purpose for a good reason.

The Complete Guide To 4 Layer PCB

Everything You Need To Know About Flexible PCB