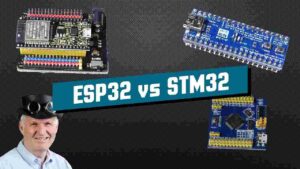 ESP32 and STM32 are two types of microcontrollers that have a wide range of applications in the market. Both are high-performance and capable of meeting needs of modern devices.

Given the two options, you will have to choose one that is better than the other. A detailed comparison will help you make the right microcontroller for your project. Whether it is a commercial IoT project, personal project or even commercial.

In this guide, we are going to compare ESP32 vs STM32 microcontrollers. In the end, you will be in a perfect position to select the perfect one for the job.

ESP32 is ranked among the most powerful and affordable microcontroller in the market. It was created and developed by Expressif Systems, a China-based manufacturer.

The chip is always viewed as a replacement for the ESP8266. Perhaps it has superior features and better performance than its predecessor.

ESP32 is integrated with dual-mode Bluetooth and Wi-Fi connectivity features.

It deploys a Tensilica Xtensa LX6 processor which can be in either single-core or dual-core mode.

Others have Xtensa LX7 dual-core processors which operate worth a built-in antenna.

ESP32 is packed with numerous desirable features such as low-noise, power amplifier,filters,power management modules, RF balun among many others.

It also comes with a plethora of peripherals such as ADC,GPIO, DAC,and I2S.

In general, it is a high-performance microcontroller that is commonly used in the IoT projects.

STM32 is another microcontroller that has established itself in the market. Manufactured by the ST Microelectronics, this microcontroller is designed for high-performance but low-power applications.

If you are building a devices and would like it to consume less power but still deliver exemplary performance, you should consider choosing this microcontroller.

STM32 microcontrollers come with numerous features and are designed to support a variety of peripherals.

The microcontroller is based on the ARM Cortex architecture and supports different peripherals such as timers, communication interfaces, GPIO and signal converters.

All these peripherals make STM32 suitable for embedded applications such as medical devices, home appliances, and automotive electronics among others.

Since it is super generous when it comes to power consumption, it is an ideal choice for those power-sensitive applications.

Now let’s look at the individual features of the STM32 microcontroller.

The ESP32 features an Xtensa processor which can be either dual-core or single-core. This processor has an operating frequency of between 160 to 240 MHz.

The microcontroller supports different peripherals including:

– It is a34× programmable GPIOs

-Motor PWM and LED PWM that supports up to 16 channels

-Low power consumption: This is the most prominent feature of this microcontroller. Despite its low consumption, it is still capable of delivering high performance.

-Provides both WiFi and Bluetooth connectivity features. This implies that the chip will enhance the connectivity of its devices and appliances

-High integration: ESP32 is designed to support a wide range of peripherals while at the same time support different interfaces.

-Easy to program: The microcontroller provides support for different programming languages such as C and Java. 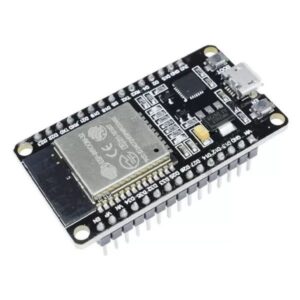 It also has a core-coupled memory of 64KB. Its battery-backed memory has the capacity of up to 80 bytes.

The Flash memory of the STM32 microcontroller comprises of 512/1024/2048 KB while its memory for the boot system can hold up to 512 memory of data.

STM32 microcontroller has all the peripherals that you are likely to find in most ICs. They include the USB 2.0 OTG, FS, CAN 2.0B, three I2C, USART, SDIO that support SD/MMC cards, bit timers, watchdog timers, temperature sensors, DMAs, cyclic redundancy checks, among others.

The interfaces for the SMT32 include Ethernet and camera interfaces, LCD-TFT controller, cryptographic processor, and a hash processors.

The microcontroller has internal oscillators rated 16MHz and 32kHz. Its operating voltage ranges between 1.8 to 3.6 volts

Now that you know the features let’s look at the key benefits of this microcontroller that put it a step higher than the ESP32.

High-performance: The fact that STM32 is based on the ARM Cortex-M3 processor means that it is capable of delivering exemplary performance. This processor is also know for having low-power consumption and affordability.

-Supports many peripheral set: We have listed a wide range of peripherals that the microcontroller supports. This feature enhances the signal capacity of the STM32

-Flexible: STM32 supports a wide range development tools that are needed for the production of IoT products. These include the System and IAR workbenches.

-Minimum code protection: The controller has limited features that can offer code protection. This can affect the security of applications built for this chip.

Which one should I choose between ESP32 vs STM32

From the discussion, you can tell that it is very difficult to decide between these two microcontrollers. This is mainly due to the fact that there are small differences between them.

However, we cannot fail to point out the individual strengths of each.

ESP32 has a way lower power consumption than STM32. If power is an issue, you know the option to go for.

On the other hand, STM32 has more peripherals than ESP32. It is more suitable to support advanced applications.

Regardless of the choice, ensure that you buy from the best microcontroller suppliers in China.

This is where ICRFQ comes in. We are a reputable supplier of microcontrollers for sale in China.