The FDS6690A is a 30 V 12.5 m N-Channel Logic Level MOSFET made with the state-of-the-art PowerTrench. It was specifically designed to reduce the on-state resistance and preserve exceptional switching performance. 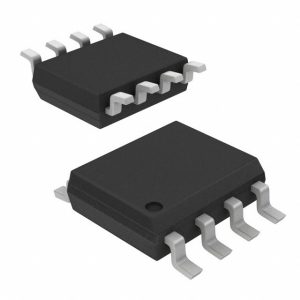 What Is Power MOSFET?

A particular metal-oxide-semiconductor field-effect transistor (MOSFET) is made to handle high power levels and is known as a power MOSFET. High switching speed and good efficiency at low voltages are its key benefits over other power semiconductors like insulated-gate bipolar transistors (IGBT) or thyristors. It has an easy-to-drive gate that it shares with the IGBT. Low gain can sometimes be present where a gate voltage greater than the control voltage is required.

Power MOSFETs were made possible by the advancement of CMOS and MOSFET technology, which have been utilized to build integrated circuits since the 1960s. The lateral MOSFET, the high-power equivalent of the power MOSFET, operates on the same principles. The conventional MOSFET was modified to create the power MOSFET, which was first made available for purchase in the 1970s and is frequently used in power electronics.

Due to its low gate drive power, quick switching speed, simple advanced paralleling capability, wide bandwidth, robustness, easy drive, simple biasing, ease of application, and ease of maintenance, the power MOSFET is the most widely used power semiconductor device in the world. It is the most popular low-voltage (less than 200 V) switch. Low-voltage motor controller Power supply, DC-to-DC converters, s, and various other devices use it.

At Bell Labs in 1959, Mohamed Atalla and Dawon Kahng created the MOSFET. It represented a development in power electronics. Power designers could achieve performance and density levels using MOSFETs that were impossible with bipolar transistors.

The VMOS from Hitachi was the first vertical power MOSFET (V-groove MOSFET).

In the same year, Y. Tarui, Y. Hayashi, and Toshihiro Sekigawa of the Electrotechnical Laboratory discovered the double-diffused MOSFET with a self-aligned gate. Jun-ichi Nishizawa of Tohoku University developed a power MOSFET for audio in 1974, and Yamaha Corporation rapidly started manufacturing it for expensive audio amplifiers. JVC, Pioneer Corporation, Sony, and Toshiba also began manufacturing power MOSFET-based amplifiers in 1974. Siliconix first made a VMOS available for purchase in 1975.

The VDMOS is the offspring of the VMOS and DMOS (vertical DMOS). John Moll and his colleagues at HP Labs developed the first DMOS prototypes in 1977, demonstrating the technology’s superior on-resistance and breakdown voltage than VMOS. In the same year, Hitachi also debuted the LDMOS (lateral DMOS), a planar form of DMOS. From 1977 until 1983, Hitachi was the only company making LDMOS. HH Electronics (V-series) and Ashly Audio are only two examples of manufacturers who used LDMOS in their high-power audio amplifiers for use in music and public address systems. The LDMOS became the most frequently utilized RF power amplifier in mobile networks like 2G, 3G, and 4G with the advent of the 2G digital mobile network in 1995.

Tom Herman and Alex Lidow at Stanford University developed the HexFET, a hexagonal variant of the Power MOSFET. International Rectifier first started selling the HexFET in 1978.

Between 1977 and 1979, Jayant Baliga created the insulated-gate bipolar transistor (IGBT) at General Electric by fusing components from the power MOSFET and the bipolar junction transistor (BJT).

Power MOSFETs of the super junction variety use P+ columns to pierce the N- epitaxial layer. At Osaka University in 1978, Shozo Shirota and Shigeo Kaneda introduced the concept of stacking P and N layers. The super junction MOSFET with alternating p-type and n-type layers was created by David J. Coe at Philips and covered by a US patent submitted in 1984 and granted in 1988.

What Is What N-Channel MOSFET?

An alternative term is metal-insulator field-effect transistor (MIFET). These types of transistors are further subdivided into P-type and n-type subcategories. These MOSFETs are further separated into p- and n-type enhancement- and depletion-based MOSFETs. This categorization is based on developing the channel that came before it or the action it started. These transistors have three terminals on the Source, Drain, and gate. For the MOSFETs to function, these terminals are required.

What Is The On-Resistance Of The Transistor?

When a FET transistor is entirely conducting (when VGS = 0), one of its built-in parameters is referred to as the On Resistance, and the notation RDS denote it. This parameter indicates the transistor’s internal resistance at that time. The resistance, often known as RDS, can range from 10 to 1000.

When a FET transistor is entirely conducting (when VGS = 0), one of its built-in parameters is referred to as the On Resistance, and the notation RDS denote it. This parameter indicates the transistor’s internal resistance at that time. The resistance, often known as RDS, can range from 10 to 1000.

How Is The MOSFET Type Determined?

What Is On Resistance Of MOSFET?

What is ON Resistance? RDS(ON) is the resistance between a MOSFET’s Drain and Source when it’s ON. The smaller this value is, the lower the (power) loss.

What Is The Condition of  MOSFET?

At this point, the operational conditions of the transistor are as follows: there is no voltage at the input gate (VIN), no current at the Drain (ID), and the output voltage VDS equals VDD. As a result, the conductive channel of an enhancement type MOSFET is closed when the device is in the “OFF” position.

If you need information or want to order FDS6690A, then contact us here at ICRFQ, your leading electronic components in china, and we will ensure you get the best product at the best price.