Large power surges can harm electrical equipment or create a fire in the worst-case scenario. A fuse or circuit breaker interrupts the continuity or flow of electricity to protect an overloaded electrical circuit. However, the way they interrupt the flow of electricity is entirely different. A circuit breaker has an inbuilt switch mechanism that is tripped by a dangerous surge of power, whereas a fuse is made up of a piece of metal that melts when overheated. Fuses interrupt power flow more quickly, but they must be replaced after they melt, whereas circuit breakers can usually be reset.

There are numerous distinctions between these two electrical devices.

Cost, applicability, operation principle, and reusability are among the distinctions. As discussed in this article, the fundamental distinction between these gadgets is the application and operating principle.

What is a fuse, and how do they Work?

There are a variety of fuses available for household and commercial use, but the most common form is made up of a metal wire or filament wrapped in a glass or ceramic and metal casing. In residence, the fuse is usually wired into a central fuse box, where all of the building’s wiring flows through. When electricity usually flows, the fuse allows power to flow freely across its filament, between circuits. If there is an overload, the filament melts, interrupting the flow of electricity.

Both business and residential fuse types are too dissimilar. The most popular variety is a filament or metal wire encased in glass, ceramic, or metal. In most residential residences, the fuses are wired into a central fuse box, through which the building’s wiring runs. The fuse opens when the current runs, allowing electricity to flow freely via the filament between the wires. When the filament is overloaded, it melts and stops the current flow.

Any power spike will be interrupted because the filament will take time to cut. When a fuse blows, it is changed with a new one. To manage the various capacities of the current, several ratings and voltages are available in the market. A system’s best fuse is usually rated slightly higher than the current’s regular value.

What are Circuit Breakers, and how do they Work?

Circuit breakers are electrical switches that protect various gadgets and residences from power overloads and circuit short-circuiting. It will typically enable power to travel through it after connecting and turning on. Depending on the jurisdiction, circuit breakers are either necessary or required when wiring houses and businesses, and they typically contain a variety of sorts.

A circuit breaker is typically installed to serve a specific space, such as the kitchen, or a specific necessity, such as all of the room’s lighting requirements. Typically, numerous devices will be served at the same time. When the power load exceeds the requirement, or a connected device or circuitry short-circuits, the device will trip and cut the power.

In an ideal world, a biometric strip may be mechanically linked to the wiring connection, causing it to overheat and deform, effectively disconnecting the power. When short-circuiting or power loading, the thinner strip will stretch and fling the switch to the off position, disconnecting electricity. Typically, these two strips are connected to a standard power source. Others employ electromagnetic connections, which trip when power is too high, or a short circuit disconnects the switch. It will immediately switch to the off position if it is tripped.

Circuit breakers have a rating as well. Individual devices are protected by smaller and lower-rated ones, while larger and higher-rated ones protect households. 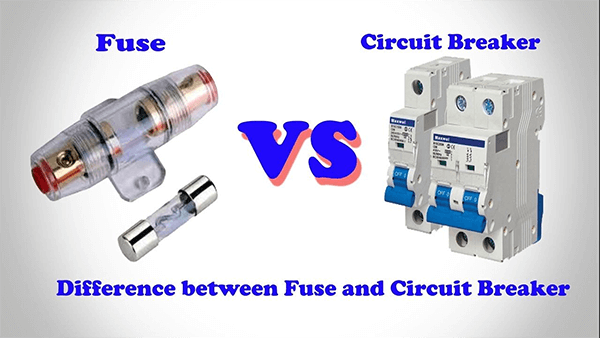 What’s the Difference Between Circuit Breaker and Fuse?

The fundamental distinction between a fuse and a circuit breaker is that a circuit breaker disconnects the connection mechanically when the power load exceeds the supply. This protects linked devices from flames and other issues. On the other hand, a fuse stops a specific gadget from becoming faulty if the current arrival exceeds the maximum allowed.

Fuse has a significant advantage over circuit breakers in that they can interrupt the flow of power more quickly due to the speed with which the metal fuse melts. Fuse will, however, need to be replaced when they entirely melt due to this melting process. Meanwhile, when a circuit breaks, a circuit breaker must be reset.

When choosing an electric system for your home, one of the most important factors to consider is the cost of installation and maintenance. It can be costly to install a circuit breaker in your home. This is due to the circuit breaker’s intricacy and the components’ expense.

When deciding between fuses and circuit breakers, it’s also essential to consider the diverse applications that each system is utilized for. Fuse is commonly employed in low-current electronic devices and households with lower electrical loads. On the other hand, circuit breakers rely on motors and other heavy machinery that consume a lot of electricity. It’s an essential factor to consider for properties with larger power loads that can overload typical fuse-based systems.

Which is better for my home: a fuse box or a circuit breaker?

There were many fewer cool electrical devices and fancy equipment in every room of every home several decades ago; hence there was far less need for electricity. Before the 1960s, fuse boxes provided a 60-amp service, considered typical and adequate. Most modern homes now require up to 200 amps of power.

Fuse boxes are not only archaic and difficult to maintain, but they also do not provide enough electricity for a modern Los Angeles residence. They frequently lack the dedicated circuits that major equipment like air conditioners, dishwashers, and clothes dryers require. Homeowners with fuse boxes are prone to overloading circuits and blowing fuses.

Although your fuse box appears to be in good working order, it may have been tampered with by prior owners. Installing a 30-amp fuse on a 15-amp circuit, for example, is simple and allows the homeowner to use more power on a single circuit than the designer intended.

Allowing an excessive current to flow unregulated can result in a variety of fire threats in the future. Many new homeowners have no means of knowing whether this has been done to their fuse box in the past and may continue to utilize fuses that enable excessive current to run through a single circuit, which is unsafe.

Here are some warning indicators that your fuse box isn’t up to the task of meeting your household’s needs:

Assume you see any of the warning signals listed above. In that situation, you should hire a certified electrician to evaluate your home’s electrical system and consider installing a circuit breaker panel. Furthermore, because of the possible safety threat of improper maintenance, some homeowner insurance policies may not cover properties with fuse boxes.

If your home already has a circuit breaker panel, there is a  possibility that it is insufficient to suit your home’s electrical needs. More technological goods, toys, and gadgets may be in your possession or on your wish list. A panel update would be the best solution in this scenario. Give Penna Electric a call and help us maintain your house safe and enjoyable to operate! 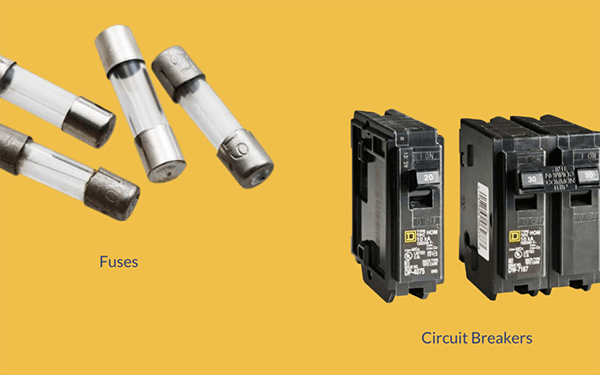 What are the Benefits of Allowing Electricians to Make the Decision about A fuse and a circuit breaker?

While you may have your ideas about using fuses and circuit breakers around the house, the final choice must be made by a licensed electrician. Let’s take a look at why people choose electricians to make this crucial decision for their homes:

Electricians are aware of the dangers

You may have a good awareness of your home’s power requirements, but how well do you comprehend the hazards associated with integrating additional systems? Qualified electricians can assist you in determining which electricity system is best for your property. They can explain the dangers of placing fuses and circuit breakers in older homes and, using their design skills, help you avoid them.

Electricians can reduce your costs

While working with a certified electrician may cost more upfront, the cost of hiring an expert is insignificant when compared to the expense of fixing your property after an electrical fire. An electrician may also assist you in designing the entire system to meet your power needs throughout the house, allowing you to have direct access to the electricity you need for all appliances and devices.

Electricians are capable of finishing the job in a short amount of time.

You may be integrating the system yourself if you take on the task of selecting a circuit breaker or a fuse system for your home. This is not only extremely risky, but it can also take weeks to complete. This is especially true if you are unaware of the system’s numerous failure sites. You may have to keep making fast enhancements and fixes to cover regions you hadn’t considered before. An expert electrician is familiar with the technology and its capabilities. They’re also more likely to design your system appropriately the first time around.

Depending on the situation, both the fuse and the circuit breaker have advantages and disadvantages. Fuses are relatively affordable and can be found at any hardware shop. They also tend to respond fast to overloading, implying that sensitive electronic devices are better protected. However, if the circuit is prone to surges that cause fuses to blow frequently, this speedy reaction can be a drawback. This is why having a good surge protector for your house is critical.

When a fuse blows, it must be replaced immediately, which might be difficult in a gloomy location or if the correct replacement is not readily available. Another difficulty is that a do-it-yourselfer may choose a fuse with a voltage or current rating too high for its needs, resulting in an overheated circuit. Furthermore, open electrical connections in a fuse box can be dangerous to someone who does not take adequate safety procedures.

Circuit breakers provide several benefits, one of which is the speed at which they can be reset. The switch that has tripped is usually apparent, and it can usually be reset. It’s also safer for the average homeowner because there’s no need to guess what fuse rating to use, and all of the electrical connections are contained in a breaker box.

Using a circuit breaker has the disadvantage of being more expensive to install and repair. Because a circuit breaker does not react as rapidly as a fuse to surges in power, electronics attached to the circuit may be destroyed by “let-through” energy. It’s also more susceptible to movement and vibration, which might cause a switch to trip for causes other than an electrical overload.

Finally, circuit breakers or fuses are one of your home’s most essential safety features. If you’ve added additional locations or outlets, you might want to consider improving your service. Contact an electrician to verify you have the proper electrical service for your home and family if this is the case.