Everything You Should Know About Hall Effect Sensors 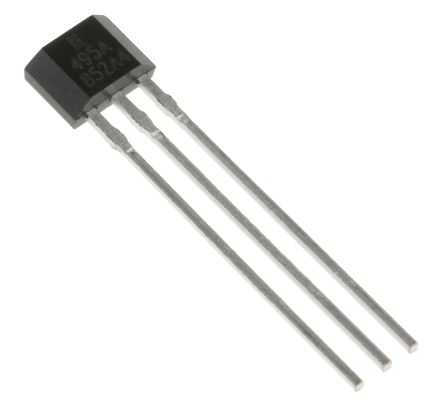 The Hall Effect is the most frequent way of sensing magnetic fields, and Hall Effect sensors are widely used and have a wide range of applications in modern times. For instance, they’re used as wheel speed sensors and crankshaft or camshaft position sensors in cars. They’re also commonly utilized as switches, MEMS compasses, and proximity sensors, among other things. We’ll look at a few of these sensors and see how they function, but first, let’s define the Hall Effect.

What Is A Hall Effect Sensor?

Hall Effect sensors use this concept to turn magnetically encoded information into electrical impulses. They are named after American physicist Edwin Hall, who discovered that electricity and magnetism could work together to move objects.

Hall Effect sensors are commonly employed in automotive systems to measure location, distance, and speed, and they have a wide range of applications. These ingenious gadgets are employed in various applications, notably anti-lock braking systems (ABS) and internal combustion engines to help ignition timing.

This guide will walk you through all you need to know about the Hall Effect sensor, including the science behind it, its applications, and how to take measurements with it.

But first, it’s critical to comprehend how this device operates.

How does the Hall Effect sensor work?

As electrons and holes travel sideways, charge carriers build up and generate a potential difference between the two sides of the semiconductor material. The passage of electrons through a semiconductor material is affected by an external magnetic field at right angles to it, and this impact is greater in flat, rectangular-shaped materials. The Hall Effect occurs when a magnetic field is used to generate a measurable voltage.

To establish a potential difference across the device, magnetic flux lines must be perpendicular (90o) to the current flow and the correct polarity, commonly a south pole. The Hall effect shows the magnetic pole type and the magnetic field strength. A south pole, for example, creates a voltage output from the device, whereas a north pole has no effect. Hall Effect sensors and switches are supposed to be in the “OFF” position when no magnetic field is present (open circuit status). They turn “ON” when exposed to a magnetic field of sufficient strength and polarity (closed-circuit condition).

Hall Effect sensors, which are activated by the presence of an external magnetic field, contain magnets. By monitoring the strength of the magnetic field, the device can detect when an object moves closer or further away. 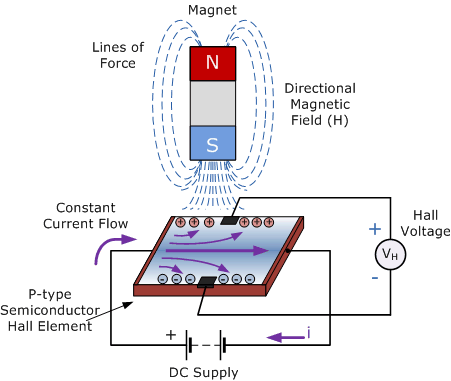 For example, if a Hall Effect sensor is installed in a door frame and a magnet is attached to the door, the sensor may identify whether the door is open or closed by detecting the magnetic field.

There are two key properties that all magnetic fields share. First, there’s what’s known as a ‘flux density,’ which refers to the quantity of magnetic flow that passes through a unit area, and second, all magnets have two polarities (the North and South poles).

This force causes electrons to migrate, resulting in a measured Hall voltage and the activated Hall Effect sensor.

The Hall Effect sensor’s output Hall voltage is proportional to the strength of the magnetic field that passes through the semiconductor material. Many Hall Effect devices have built-in DC amplifiers and logic-switching circuits, and voltage regulators to improve the device’s sensitivity (and hence effectiveness). 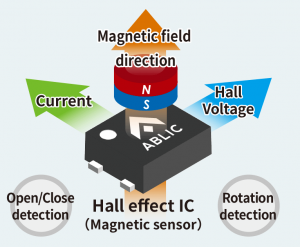 Hall effect sensors are divided into two types: those with linear (or analog) outputs and those with digital outputs. Analog sensors produce a continuous voltage output that rises in a strong magnetic field and drops in a weaker one.

With linear output Hall effect sensors, the output signal increases in parallel with the strength of the external magnetic field when the device comes into contact with the magnet until it approaches the power supply’s limits.

On the other hand, the digital output device has a ‘Schmitt trigger,’ a bistable circuit that slowly increases and decreases the output as the voltage rises and falls to different thresholds.

When the magnetic flux traveling through the Hall Effect sensor exceeds the device’s preset value, its output switches from ‘off’ to ‘on’ thanks to the Schmitt trigger. The gadget’s built-in hysteresis prevents the output signal from oscillating when the sensor moves in and out of the magnetic field.

Digital Hall effect sensors are classified as bipolar or unipolar based on the sort of magnetic field required to operate them.

Because most digital Hall Effect sensors have limited output drive capabilities, they cannot switch high electrical loads directly. An open-collector NPN transistor is used in many digital sensors to combat this.

When the magnetic flux density is larger than the Hall Effect sensor ‘on’ point, the transistor acts as a switch, shorting out the output terminal to the ground. Hall Effect switches come in various shapes and sizes, and they can be used for a wide range of applications.

After explaining how Hall Effect sensors function and the various varieties available, when do these devices come into play? The uses for the device vary depending on how the magnet is positioned and moves towards the sensor.

Magnet movement types include head-on, sideways, push-pull, and push-push, among others, with these variations altering how the sensor detects the magnetic field. Before diving into the various Hall Effect sensor applications, it’s worth looking at the two most prevalent magnetic movements to understand better how and why they function.

This occurs when the magnet slides sideways across the face of the Hall Effect sensor. This movement is especially handy for counting rotational magnets or determining the rotational speed.

Hall Effect sensors can be used in various ways due to the different magnetic movements. In both industrial and home contexts, the most prevalent application for these sensors is to measure items’ existence, location, and proximity.

You may have a Hall Effect sensor in your printer at home, detecting open covers or when paper needs to be restocked. Hall Effect sensors can be utilized as rotating speed sensors because of their sideways detection movement. They are particularly beneficial for speedometers in cars and other vehicles and bicycle wheels, gear teeth, and electrical ignition systems.

Current, pressure and fluid flow sensors are examples of other Hall Effect sensor applications in industrial and manufacturing processes. Hall Effect sensors can also monitor DC magnetic flux in current transformers and are a contactless method.

Hall Effect sensors can be used to assess fuel levels in two ways. To begin, a permanent magnet is attached to the surface of a floating object in a vertical float system, while the sensor is attached to the top of the tank, in line with the magnet.

Hall Effect sensors are often used to time the speed of rotating parts like wheels and shafts. They are especially useful in various ‘tachometers,’ measuring vehicle speed and RPM and gauging fuel.

A Hall Effect sensor (or simply Hall sensor) detects the presence and magnitude of a magnetic field using the Hall Effect. The output voltage of the Hall sensor is proportional to the field strength.