How Many Amps Can a 60 Amp Breaker Handle? Detailed Answer 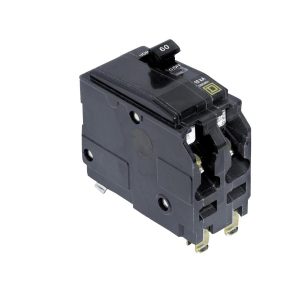 Many believe answer to “How many amps can a 60 amp breaker handle?” should be an obvious: 60 amps. However, this is not the case. Although this is the case with many circuit breakers of the same capacity, it is not the case to all.

According to the Code, you must restrict the current to 80% of its normal value. Therefore, the capacity is reduced to 48 amps in most homes throughout the United States and Canada. This is the solution that is both the best and the most exact. However, I’ll describe some more considerations that should be made below.

Although it is possible for some distributions that use 60-amp breakers to handle full load currents, this is not often recommended.

When offering recommendations, the National Electrical Code considers public health and safety at all times. Without a doubt, a circuit breaker rated for 60 amps can manage certain types of electrical distribution up to its maximum capacity of 60 amps. Despite this, there are significantly fewer of these than there are of the typical arrangements.

Keep in mind that the Code suggests that you only use 80% of the maximum capacity because it considers other considerations such as starting up the engine and intermittent loads. If you use a circuit breaker with a total of 60 amps to its fullest extent, you will probably see more frequent trips, particularly if these additional loads occur.

We can’t overlook the impact of the other parameters involved when estimating the maximum amperage load that a circuit breaker with a rating of 60 amps can support. Look at the following scenarios and components to understand why this is the case.

In addition, we must not overlook the numerous varieties and other kinds of circuit breakers. What happens if, for example, you’re working with a circuit breaker that has two poles and 30 amps each? Is the capacity of a double-pole 30-amp breaker the same as 60 amps? In this particular scenario, wouldn’t it make sense to double the 30 amps by 2? To be honest, no. The load you are dealing with on each leg is merely 30 amps.

What about the wiring for a double-pole breaker capable of 60 amps? It is the same as what you would use for a breaker rated at sixty amps. It ranges from 4 AWG to 6 AWG in size. Because it is a double-pole, the only distinction is that you must install two hot wires that share one neutral wire. This is the only difference. 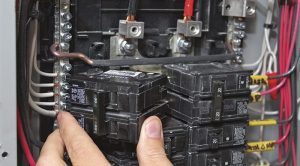 Shut Off the Power

Before doing any work within the breaker panel, turning off the electricity to the entire panel is standard practice. Everyone living there should know that the electricity will be cut off. Turn off the main breaker once each breaker has been turned off.

Turning off the primary breaker requires carefully unscrewing the panel cover screws to remove the cover. Protect these screws at all costs.

Swap Out the Old Breaker for the New

The old circuit breaker’s wiring must be disconnected before the new one can be installed. With care, pry the old breaker out from the middle and then roll it outward to remove it. Reverse the steps you took to remove the old breaker and insert the new one, ensuring security to the bus bar.

Carefully rejoin the two wires to the breaker, this time using the new breaker, but be sure not to overtighten the screws. It is important to connect the ground wire (often an uninsulated copper wire) to the grounded bus bar whenever a new circuit is wired. The neutral wire should be connected to a neutral bar if one exists.

If the power is out of the panel, it’s a good time to check for any loose connections. Make sure you keep your distance from the panel’s primary power cables.

Cover up the new breaker the same way you took the old one out. To install a new two-pole breaker in your panel, you’ll need to access the corresponding knock-outs and make the necessary adjustments.

After replacing the cover of the breaker panel, you should flip the main breaker to restore electricity and then test your replacement breaker. Once you’ve successfully replaced or installed the new circuit breaker, you can activate the remaining breakers one by one.

What Gauge Wire Should I Use With a 60 Amp Circuit Breaker?

Several variables determine the size of a wire. The first thing to look at is the circuit’s current, which is 60 amps in this example. The second factor is the total circuit length. Another factor is the kind of wire utilized.

For a two-pole, 60-ampere circuit, use two or three strands of 4AWG wire. At the highest voltage drop of 3%, the maximum length of 209 feet is achieved. Keep in mind that the maximum current that can safely flow through a 6-gauge wire is 55 amps, yet some people will still install a 60-amp breaker because they believe the circuit would never reach that high of a current. The security of your property depends on your selecting the appropriate wire gauge.

“How many amps can a 60 amp breaker take?” There is no ambiguity here; 60 amps or 48 amps is the objective reality. However, the latter should always be prioritized if you wish to cut down on travel time and yet stay within the Code’s parameters.