How Much Storage Do I Need on My Laptop? 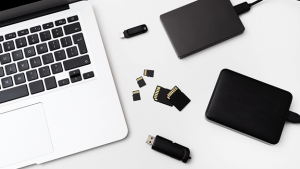 When choosing a new laptop, storage is a significant factor to consider. The storage device on a laptop impacts its efficiency due to its size, capacity, and speed. This blog post will look at what hard disk size is best for laptops. We’ll also talk about how much storage space is required for different users, such as gamers and video editors.

Understandably, many individuals are unsure how to choose between one sort of computer and another because they are unfamiliar with the various types of current storage possibilities. It all relies on the content of your files, the kind of data you save, and the location where you intend to keep it. If you’re a photographer, storage will be a significant factor to consider. If all you need is a machine to browse the internet, though, it might not be such a huge concern.

One of the most common misunderstandings is regarding RAM when it comes to storage. Random Access Memory (RAM) is your laptop’s short-term memory. When you load a program, it is relocated from storage to RAM, making it easier to access and operate. Although the RAM is where applications are officially stored on a laptop, it is only used for a short period of time. When you switch your laptop off, your RAM clears. As a result, nothing will be permanently stored there.

In most situations, when we talk about laptop storage these days, we’re referring to SSDs or solid-state drives. When your laptop is turned off, this is where you’ll find all of your apps and media files. Because it’s a non-volatile sort of storage, all of your open programs will close when you turn the device off. This implies it can save data even when it isn’t powered on, which is helpful. But what other options are there for laptop storage? Let’s have a look at it quickly.

Many consumers believe RAM to be an essential storage factor when purchasing a laptop. However, the truth is somewhat different. RAM, or Random-Access Memory, is a small area on your laptop where you can store data for a brief period of time. When you close your laptop, it normally clears everything. As a result, the main criterion is hard disk storage, where each file is permanently stored on your device. As a result, you should think of your hard disk as your central store.

If you’re going to buy a laptop, it’ll almost certainly have an SSD. For example, SSDs have been employed in MacBook Pros since 2012, although HDDs were previously used. This is because SSDs are not only faster than traditional hard drives, but they are also more reliable. SSDs store data in flash memory, which makes them nearly weightless.

This is common among laptop companies, particularly those using eMMC storage rather than SSD. An eMMC card is permanently attached to your laptop’s motherboard and cannot be upgraded. eMMC is a flash memory found in smartphones, tablets, and small laptop computers.

It’s primarily found in phones and tablets, but it’s also found in smaller notebooks. It’s only beneficial for people who don’t need a lot of storage, but it’s the same as SSD; thus, it’s preferable to SSD over eMMC because it can’t be upgraded.

You’re probably thinking of a hard disk drive when you think about computer storage. However, using a Hard Disk Drive in a current laptop would significantly slow it down. If you’re seeking extra storage that you can connect to your laptop these days, an HDD can be a decent option. However, an SSD will be the superior option for your primary storage, which you would use daily.

Difference between SSD and HDD 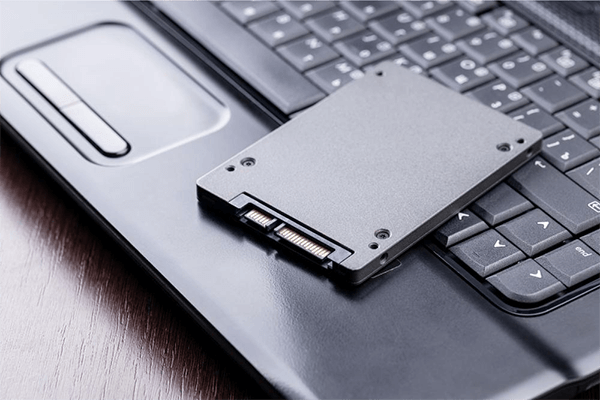 The two most common storage systems in laptops are SSD (solid-state drive) and HDD (hard disk drive). Why is SSD new when HDD has been around for a long time? In many ways, these two are opposed. Here’s more information about the differences between them:

The SSDs are based on the SATA interface but comparatively newer technology. Hence, they cost more than an HDD. On the other hand, HDDs have become cheaper since they have been around for a while now.

HDDs endure longer than SSDs in terms of longevity. A flash memory drive’s cells take fewer cycles to store data. Overall, SSDs have a long lifespan, but the HDD comes out on top by a razor-thin margin. In the event of infirmity, the SSDs come out on top. They are not susceptible to physical damage like a hard disk drive, and they do not lose data due to accidental falls.

A solid-state drive (SSD) allows you to store more data in less space. The data takes up less physical space in it. On the other hand, HDDs store data, resulting in higher physical space use.

The speed of SSDs is faster than that of HDDs. SSDs have speeds ranging from 550MB/s to 2.2GB/s. As a result, if you want a quicker laptop, get an SSD. Laptops with SSDs are suitable for gaming or complex programming work since they provide speedier performance. An SSD-equipped laptop will boot in 10 to thirteen seconds, while an HDD-equipped device will take roughly thirty.

Solid-state drives (SSDs) use less energy than traditional hard disk drives (HDDs). As a result, SSD-equipped laptops use less energy and save money. HDDs consume a lot of power since they need to move data to process and store it. As a result, computers with hard drives have shorter battery life. On the other hand, an SSD can be a terrific option if you need a laptop that has a long-lasting battery backup.

HDDs generate more noise because they require rating platters and magnetic components, and you may hear faint clicks when working on your laptop. The SSDs, on the other hand, do not generate a lot of noise. So, if you want a quiet notebook, opt for one with a solid-state drive (SSD).

Using a laptop with a hard drive will heat up more quickly and overheat more frequently. It occurs as a result of the HDD’s rotating components. The SSD, on the other hand, is not prone to producing much heat as a result of its mechanism and occasionally overheats.

How Much Storage Do I Need on My Laptop?

It is impossible to give a general answer to the subject. Because everyone uses their laptop for different reasons, the amount of storage available differs from person to person. While students may require less capacity on their laptops, professionals must purchase a laptop with sufficient storage to meet their needs.

In most circumstances, a laptop’s minimum storage capacity is 512GB. It is, however, available in a variety of entry-level laptops and has a storage capacity of up to 250GB. Here are some things to think about while looking for a computer with enough storage:

An entry-level notebook will suffice if the laptop is for a school student using it for educational purposes. Laptops with 512 GB of storage are sufficient for them. It also provides ample storage space for their documents, assignments, images, and other personal materials. Those who require more storage might purchase a laptop with a 1TB hard drive.

Students with a science or technological background, on the other hand, should get a laptop with 1TB of storage space and the ability to add external storage if necessary. Furthermore, engineering students are frequently required to work on advanced computer programming or drawings. As a result, more space will be needed to accommodate their work and tasks.

Storage for professional use can range from 512GB to 1TB. Regular office work may not necessitate many documents or storage space. Professionals in this field should consider a laptop with a storage capacity of 512GB. Professionals such as engineers, architects, and academics, on the other hand, can use 1TB laptops to run specialist applications or access a large number of documents daily. Designers, bloggers, and editors are all in the same boat.

Buyers must evaluate their entertainment needs in addition to their professional requirements. Many people now use laptops for gaming, online contest streaming, and other uses. A laptop with 1TB of storage space is recommended if you plan to play high-end video games or stream movies and TV programs. It will give you enough storage space for your games or movies while also giving you a stunning graphic experience.

What Is the Most Appropriate Storage Amount for Each Situation? – Use Cases

256GB SSDs are the way to go for today’s demands. You’re rare to find a 2TB SSD because SSDs are more expensive than HDDs. On the contrary, 2TB HDDs are plentiful.

What Is the Minimum Amount of Storage Space Required for Students?

If you’re a student looking for a laptop with enough storage for school or university, a 128GB or 256GB SSD will suffice. Because they primarily use browsers and online storage, Chromebooks are popular among school pupils.

What Is the Minimum Amount of Storage Space Needed for Gaming?

For gamers who want to know how much storage they need for gaming, a 512GB SSD will be adequate. Because most games have an installation size of roughly 40-50GB, game updates and patches add more data to the game, causing the overall file size to rise over time. A 1TB or 512GB storage capacity is plenty for a gamer.

What Is the Required Storage Space Music Production?

A 512GB SSD should be your first choice if you’re recording or composing music on a PC or laptop and aren’t sure how much storage you’ll need. It’ll be enough for keeping track of your current tasks, DAW plug-ins, DAW tools, and sample music libraries.

What Is the Required Storage Space for Photo and Video Editing?

An SSD with more storage space should be your first choice if you work in photography or filmmaking for a living or fun. As a result, content creators should choose 1TB of SSD storage, which will allow them to store project backups and software files. Here are some of the most popular choices I’ve made based on user feedback. It’s not a hard and fast rule, and if you run out of capacity, you can update the storage in each instance.

There is no conclusive answer to this question. Users who aren’t professionals, on the other hand, will be able to get by with 128-320GB of storage. Professional users will need storage capacity greater than 512GB and closer to 1TB. Users prefer cloud storage to traditional storage mediums since there is no risk of physical harm with cloud storage.

As a result, it all comes down to your budget and your goals for using your laptop. After reading this article, you should now understand what storage and how much storage you require.