How To Fix A Faulty Catalytic Converter? Best Guide 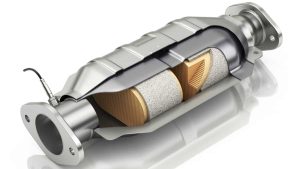 But what exactly is a catalytic converter? How does it work? And how can you recognize when there might be something wrong?

If you have noticed strange noises coming from under the hood, or if you frequently have to refuel early due to poor mileage, then you could have a problem with your catalytic converter. Fortunately this article will teach you everything you need to know about fixing that pesky cat!

What is a Catalytic Converter?

How Does a Catalytic Converter Work?

5 Signs your catalytic converter has a problem

Before you even focus on fixing, you should start by identifying the problem. Here are the top signs that your catalytic converter has some issues.

Do you hear some strange noise coming from the car’s exhaust system? Probably that is a sign of a bad catalytic converter.

When the catalytic converter is not working properly, you may notice a persistent rattling or buzzing noise coming from the exhaust. This is often described as a “receding” noise, meaning that it sounds like the engine is slowly being pushed away from you.

When the catalytic converter fails, it is unable to clean the exhaust gases. This causes the engine to require more fuel to create the same amount of power. The engine may also sound louder due to unburned fuel in the exhaust.

A misfire occurs when a spark plug fails to ignite the fuel in a cylinder. When the catalytic converter fails, more unburned fuel is sent out into the exhaust. The unburned fuel may then enter the engine’s air intake and cause misfires.

No matter how hard you are stepping on the accelerator, the car is not just responding as it should.

The problem could be with the catalytic converter and not the engine or any other component.

When the catalytic converter fails, it is unable to remove unburned gasoline from the exhaust. This gasoline collects in the engine’s cylinders and causes a significant loss of power.

Thanks to technological advancement, you can easily get messages about the  poor state of your catalytic converter. This will come in the form of an engine light illumination.

Here are the tools and equipment you will need for fixing your bad catalytic converter.

Torque wrench – A torque wrench is used to tighten any bolts that have been loosened or removed during the repair process. It’s important to use the correct torque setting on these bolts, or they may come loose again.

The vacuum pump can also be used to check the condition of the engine’s vacuum system. 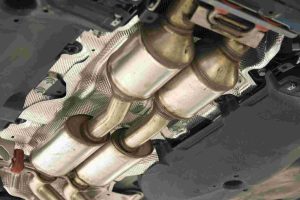 Step 1: Fix issues on the exhaust

If your catalytic converter is already broken, you’ll want to start by fixing any issues on the exhaust.

If there is any rust or corrosion on the exhaust pipes, you can use a wire brush to clean the pipes. If your vehicle has a catalytic converter, you’ll want to check the condition of the converter.

You should also inspect signs of holes raptures on the exhaust and refill them.

Step 2: Check the muffler of the vehicle

You can check the muffler of the vehicle by removing it from the vehicle. Make sure you have all the proper tools to do this safely. You can use a multimeter to test the condition of the muffler. If the multimeter shows an open circuit, there may be a break in the muffler.

If there is a short circuit, there may be corrosion or rust inside the muffler. You can clean the rust out of the muffler with a wire brush. If there is corrosion, you can try to sand it down.

If the corrosion is too severe, you can attempt to repair the muffler or replace it.

Could it be that your vehicle has been too ideal for long and that is why the catalytic converter is not working?

If the problem does not go away, you can try checking the other components of your car.

If you have found a clog in the catalytic converter, you may be able to solve the problem by adding a cleaning additive to the engine. You can do this by adding a fuel system cleaner such as a car fuel additive. These additives are designed to clean out the engine and restore normal operation. You can add a fuel additive to your tank as often as necessary to clear the clog in your catalytic converter.

You can check the manufacturer’s manual to see how often your particular model needs to be cleaned.

Step 7: Keep an eye on the engine

After you’ve fixed the catalytic converter, it’s important to keep an eye on the engine. If you notice another problem, you’ll want to head it off before it becomes a major problem.

You can also check the engine’s belts, hoses, and fluids to make sure they are in good condition. These items can break down over time and cause the car to run poorly or not run at all.

Now., let’s say you have decided to replace your catalytic converter, it will be wise to buy from the best suppliers and manufacturers in China.

Ensure that the manufacturer has the experience and reputation for delivering the best catalytic converters.

Also, ensure that their products meet the international standards for catalytic converters.