How to Install A Dimmer Switch? 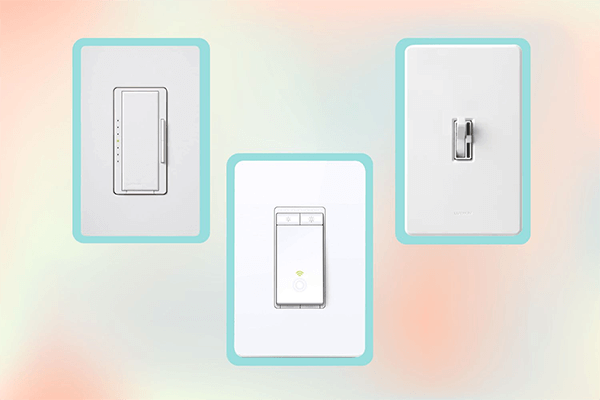 Standard wall switches provide simple on-off control of light fixtures. On the other hand, Dimmers allow you to alter the amount of power a fixture receives, changing the lighting intensity. A rheostat—a big variable resistor—was used in older dimmers. As the rheostat’s resistance grew, the voltage to the lamp was reduced, and the energy that would have gone to a brighter light instead became wasted heat energy dissipated in the dimmer.

But, as time has passed, we now employ electrical dimmers. A clever tiny device called a Triac is used in electronic dimmers. A Triac is a solid-state electronic switch or relay with three terminals that can turn power to a bulb on and off up to 120 times per second. This power sequencing is not visible to the human eye because it quickly occurs. It uses extremely little energy and produces very little heat.

We’ll show you how to replace a single-pole switch with an electronic dimmer using incandescent or halogen lighting. You can create mood lighting in one simple DIY while also conserving energy. First, what exactly is a dimmer switch?

What Is A Dimmer Switch?

Dimmer switches are simple electronic devices that allow you to adjust the brightness of your lighting. Many homeowners have dimmers installed to manage lights, save money on electricity costs, or as an added security feature. Dimmer switches can be placed by electricians or anyone familiar with connecting these devices. Continue reading to learn more about how dimmer switches function and how they might benefit your house.

How Does A Dimmer Switch Work?

It is essential to know how to achieve the greatest results from a dimmer switch, so understanding how it works is beneficial. Depending on the type of dimmer switch, simple electrical concepts are used to operate it. A simple dimmer switch reduces the amount of energy flowing through a circuit to dim the brightness of a light. Modern dimmer switches, on the other hand, work differently.

Modern dimmers switch on and off the power flowing through a light’s circuit. When this happens, electricity is diverted away from the light bulb. The electrical current that flows through the lightbulb is lowered. Keep in mind that your home’s AC controls the on/off energy flow, or “switching cycle.”

When you use a dimmer switch to dim or brighten the lights, it changes the direction of electrical flow. Electricity is always flowing in both positive and negative directions. When the circuit alternates, it will turn off or on automatically.

The dimmer switch ultimately controls the electrical cycle for dimming a light. The cycle takes longer to complete when the switch is turned down low, and the light emits a lower degree of brightness. It burns brighter when turned up since the on/off cycle is more fluid. It also takes less time to finish the cycle.

Over the last century, electricians have created a variety of dimmer switches. Dimmer switches with on/off features provide better control over power use and help save money, so they are popular today.

Wireless technology is commonly used to control integrated dimmer switches, but they can also be operated manually. Modern smart home and security systems frequently use these dimmer switches.

Dimmer switches with touch screens are also popular. They are commonly mounted on a wall in the home and are both practical and easy to use and give a room a contemporary appeal.

Slide dimmers are very common and allow you to change the brightness by moving a switch back and forth or up and down. These dimmers may also include a button that automatically slides the gadget back and forth.

Finally, a manual rotary dimmer can be used to dim the lights. The dial is also an on/off switch, which is quite basic.

What Does a Dimmer Switch Do?

Dimmer switches merely change the intensity of electric light bulbs. They are commonly used to save energy and adjust the lighting environment in homes and workplaces. Dimmer switches can be integrated with the functionality of your smart home to adjust the ambiance. You can automatically use timers or smart controllers to automatically decrease the lights at a given time or manually alter the light intensity.

How to Install A Dimmer Switch

Because dimmer switch installation differs somewhat depending on the manufacturer, always read the instructions and follow their suggestions. On the other hand, most dimmers will be installed similarly.

Although replacing a regular light switch with a dimmer is a reasonably simple DIY project, every electrical repair carries the risk of dangerous, if not death, shock. This project is best suited for a DIYer with some electrical circuit knowledge and previous experience with comparable fixes. As far as electrical repair jobs go, this one is fairly simple. If you’re not sure about your skills, though, you should contact an electrician.

First and most importantly, before making any electrical circuit repairs, make sure the power is turned off. Disconnect the switch’s power supply. This can be done by removing the fuse or turning off the circuit breaker that feeds power to the switch from your electrical service panel.

Remove the switch’s cover plate and gently remove it from the electrical box by its mounting straps. Check the switch terminals for power by using a neon circuit tester. Connect one circuit tester probe to the screw terminals of each switch and the other probe to the bare copper grounding wire or grounded metal electrical box. The power is off if the tester does not illuminate.

A dimmer switch must have enough space to disperse a little amount of heat created during use; thus, cramming it into a box that is too small or too full of wires is dangerous. It’s a clue that the box is too small if you can’t get the dimmer switch to fit. The switch manufacturer may provide specifications for the size of the box and the number of permissible wire connections. It’s advisable to have an electrician install a larger electrical box if it is too tiny. 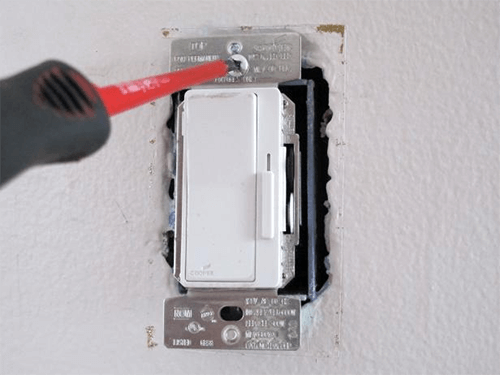 Disconnect and Remove the Existing Switch

Remove the old switch after the power has been turned off.

Remove the switch’s wires by loosening the screw terminals. There will be a slot to slip a small screwdriver or nail into to release the wire if the switch has been connected with push-in fittings.

Check the condition of the wires and straighten them. To connect to the dimmer switch, badly nicked wires must be snipped off and re-stripped.

The switch will have two or three wires to detach. One will be a “hot” wire that is insulated black wire. Another insulated wire might be white, but it’s covered in black electrical tape to indicate it’s also carrying a hot current. A bare copper ground wire, if present, will be the third wire.

A switch box with no ground wire may be found in an older home. If the dimmer is a replacement, an exception in article 404.9(B) of the current National Electric Code (NEC) enables it to be placed without a connected ground wire.

Cut the dimmer wire short and secure it with a wire nut. Also, if the dimmer is installed without a ground wire, as allowed by the NEC, it must have a non-combustible plastic wall plate.

Connect the Ground Wire to the Dimmer 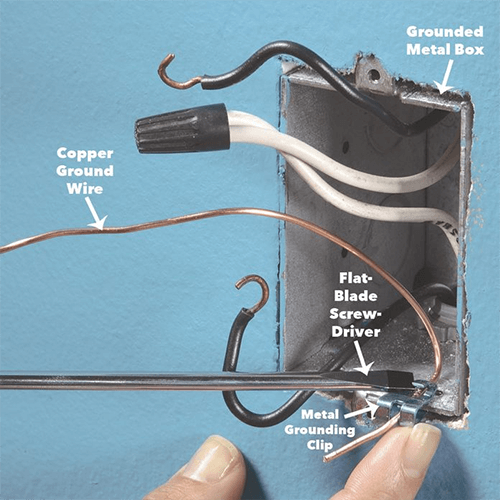 Now is the time to connect any ground wires that your switch box may have. With the combination tool, remove about 5/8 inch of insulation from the dimmer lead for the ground wire. Hold the dimmer ground wire next to the circuit ground wire and screw a wire nut clockwise over the ends to secure the two chevaliers.

It’s a lovely idea to wrap the connector with electrical tape after twisting the wires together using a wire nut, but it’s not necessary.

Connect the Load Wire to the Dimmer

Electronic dimmers are notorious for being picky about which wire goes where. You’ll probably find two different colored cables on the back of the dimmer. One wire will be black, while the other will be a different color, most likely red or blue. For this tutorial, assume blue.

Remove any pre-cut insulation from the dimmer lead for the blue wire, leaving roughly 5/8 inch of wire exposed. Twist the circuit LOAD wire and the exposed end of the dimmer blue wire together clockwise. To establish a strong connection, twist the wires together until they are somewhat twisted.

What’s the best way to know which wire is which? One of the insulated wires you detached from the original switch was black, and the other was likely white and labeled with black tape. A hot wire is this white wire. The black tape indicates that the previous installation marked it as a high current wire rather than a neutral wire.

Connect the Hotwire to the Dimmer

Connect the hot wire to the remaining black wire. The circuit is powered by the hot wire, which travels from the switch to the electrical power source in your panel.

Remove any pre-cut insulation from the wire, leaving about 5/8 inch of wire exposed.

Hold the dimmer wire’s exposed end against the circuit hot wire and secure it with a wire nut twisted clockwise over the ends. Turn the pair of wires until they both have a tiny twist—then the connection is secure.

Test the Dimmer for Proper Operation

Check the operation of the dimmer now that the wires are connected. Return power to the electrical service panel first.

An air gap switch on some dimmers, such as the Leviton Decora, controls the power to the switch locally. When the switch is pulled out, power is cut, and when it is placed in, power is restored. Ensure that it is firmly seated.

The dimmer can be turned on using the touch plate, lever, or sliding bar. You can go to the following step if the lights turn on. Skip to the troubleshooting section if it doesn’t work. 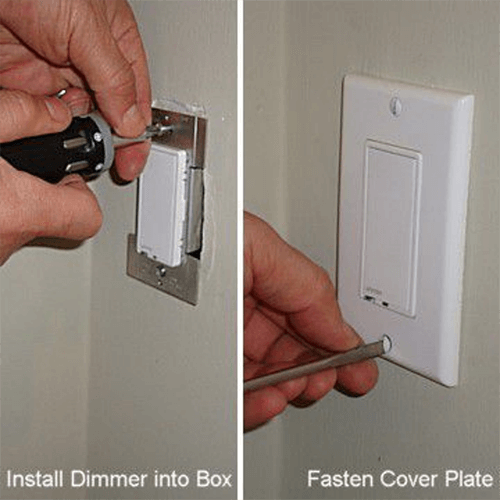 Screw the two mounting screws into the dimmer plate. Apply the two final screws to the plastic cover plate and secure it over the dimmer.

There are a couple of things to look for if the dimmer isn’t working.

If the light turns on but flickers, it could be a low-wattage bulb, a loose wire, or a faulty fixture bulb connection. Begin by replacing the bulb with one that has a higher wattage and ensuring that it is tightly sealed in the socket.

If it doesn’t work, turn off the power and double-check that the wire connections in the switch box are secure. Turn the power back on and test it out.

Installing a dimmer switch saves electricity and creates a pleasant atmosphere in any area. Installing a single-pole dimmer switch, which controls a light fixture from a single wall switch, is a very simple procedure for most do-it-yourselfers. There are also three-way dimmers designed for controlling lights from two switch positions but can also be used in single-pole installations. Most modern dimmers can be used with any bulb (incandescent, halogen, or dimmable CFL and LED).

For more details on Dimmer Switches, contact us at ICRFQ. We got the best quality dimmer switches. At ICRFQ, we manufacture the best electrical components in China.