How To Put Out an Electrical Fire?

Domestic fires are a prevalent hazard. Knowing what to do in the event of an electrical fire, especially if you live in a small apartment, could save your life one day. It’s wise that simply knowing how to call for help or raise the alarm won’t be enough. These fires spread swiftly, necessitating the use of special extinguishers. The presence of mind and awareness of the topics covered in this article may be all that stands between you and disaster.

So, let’s get started.

What causes electrical fire to start

The majority of electrical fires start in occupied areas of the house. 15.4 percent fire outbreaks are recorded to originate within bedrooms, 6.7 percent in the living room, and 7.4 percent in the kitchen. It adds up when you think about how much we use technology in these sections of our house.

However, fire outbreaks can happen in areas in a building or at home that is infrequently visited. Electrical fires have been documented to start in the attic 13% of the time and in-wall spaces 8.7% of the time.

How is the heat that causes a fire produced?

Heat is generated by circuit overload, which can start a fire. This predicament can arise due to two factors.

To begin with, it might happen when too many gadgets are using too many amperes at the same time. The amount of electricity flowing across a circuit is measured in amps. The integrity of the electrical circuit and any extension cords utilized may be affected if there is too much heat due to circuit overload.

The second cause of a circuit overload is a short circuit, which has been linked to many electrical fires. Electrons travel via wires in an electrical circuit and do work in the appliances to which they are attached. When the passage of these electrons encounters little or no resistance, a short circuit ensues, resulting in circuit overload. This can also result in excessive heat and sparks, starting a fire.

It is a well-known reality in the electrical world that a power strip or an extension cord can pass for a handy item on any given day. However, these tools have been abused, resulting in fires in a variety of locations. These devices have limitations, and they should not be allowed to carry more current than they were meant to carry. 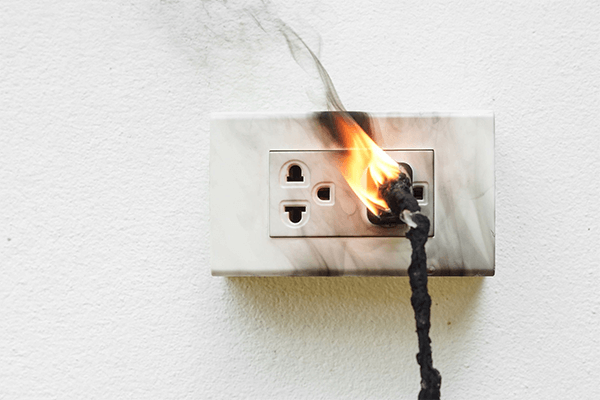 How to Extinguish an Electrical Fire the Correct Way

Even though you took numerous measures, you now find yourself in the dreadful predicament of an electrical fire. When this is the case, you must know exactly what to do. When a fire breaks out, do not attempt to be a hero. Firefighters are already filling in for us. If a fire has escalated out of control, prioritize safety for your family members before calling for help.

If the epidemic is still in its early stages and you are certain that you can handle it, keep these guidelines in mind and follow them:

You must prioritize your safety if an electrical fire is rapidly spreading and you are unable to cut off the power. If you can’t put out the fire yourself, call 911 as soon as possible and specify that it’s an electrical fire. Then, before attempting to put out the fire on your own, double-check that you have two clear escape routes. Evacuate promptly if one of those two paths becomes closed or dangerous to approach. It isn’t worth it to put your life on the line.

Baking soda is commonly associated with cleaning, however, it can also be used to extinguish fires. Make sure you know where it is in your kitchen because promptly locating it and pouring it on an electrical fire will assist put out the flames. Many fire extinguishers contain baking soda-like chemicals.

If the fire is tiny, you may be able to cover it using a blanket to prevent the blaze from gaining oxygen. Remember that you want to use the blanket to smother the fire, not just toss it at it. As a result, a blanket is unlikely to suffice if the fire is too large.

When a fire starts, a common reaction is to throw water on it. It can be safe when the fire is caused by something other than electricity. If the problem is electrical, however, switch off the power first. Because water is a good conductor of electricity, you may get electrocuted if you toss water while the power source is on.

Because oxygen feeds fire, one of the best ways to put out an electrical fire is to shut off the oxygen supply. This can be accomplished by draping a heavy piece of clothing, such as a blanket, over your head. This is only possible if the fire is minimal. If the fire appears to be out of control and the situation is dangerous, do not attempt to put it out.

Smoke detectors, also known as smoke or heat sensors, are one of the safety features you should put in your home or any structure where the usage of electrical appliances is unavoidable. When a fire breaks out, these gadgets buy you time to flee. It is suggested that you place one on each floor of your home, one in each bedroom, and one outside of the sleeping quarters.

Having the proper hands take care of your house’s electrical wiring or calling on them when there are issues that necessitate the experienced services of electricians will provide you with the peace of mind you deserve. The list of preventative measures to avoid electrical fires is endless, but they are all equally crucial. Electrical fires have posed a serious threat to human life and property for a long time. The appropriate responses can be employed to address them when they occur. This can help reduce the likelihood of damage or even death.

How do you Stay Safe if You Can’t Put Out an Electrical Fire?

If you can’t put out the fire or it’s getting out of control, dial Emergency contacts straight away. It’s critical to inform the operator that it’s an electrical fire so that firemen can be prepared.

If you’re able to safely do so, close the doors to the burning chamber to prevent the fire from spreading. Then, securely exit the building and ensure that everyone within has exited.

Signs of an Electrical Fire

There are several warning indicators to watch for that could indicate the possibility of an electrical fire. It is critical to notice these difficulties early to ensure that the problems are remedied in time to avoid a fire.

When electrical power surges occur, a circuit breaker is used to help switch off the electricity. When the power is switched off repeatedly, there is often a problem that could result in a fire. The issue could be that the appliances are drawing too much power and there is a short, or the circuit is broken.

Burning odors can arise from a variety of sources, including outdated wiring, short circuits, and loose connections. It could be due to wiring from appliances hidden behind the wall when this happens.

It’s possible that the outlets are discolored, indicating that they’re not working properly. When an appliance is plugged into it, sparks may occur. These outlet faults could be a precursor to an electrical fire.

This can be a problem when a home’s wiring system is more than 20 years old, and especially more than 50 years old. The older the wiring system, the more probable it will be unable to withstand the current power levels. These are more likely to develop additional issues, resulting in fires. 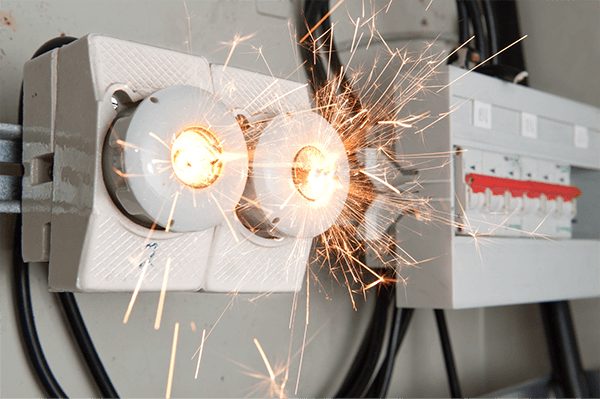 Any professional electrician will tell you that there is a lot you can do to assist prevent fires in general, much alone electrical fires. The most critical thing, though, is to make sure you have functional smoke alarms in your home. You can also take the following steps:

Avoid producing sparks or too much heat with your electronics to avoid house electrical fires. In practice, this involves looking after your electronics so that your circuits aren’t overloaded and the electricity stays where it belongs. It helps to have a basic understanding of how your home’s electrical system operates to accomplish this.

Electricity is distributed throughout your home by a network of branch circuits. For example, you probably have separate circuits for your kitchen and bedrooms. The breaker box is in charge of controlling the power to each of these circuits as well as the entire house. The breaker box, which is usually in the garage, closet, or outside, contains circuit breakers that regulate the power to each branch circuit and the main breaker that controls power to all circuits.

Breaker boxes not only allow electricians to turn off the electricity before working, but they also aid to avoid electrical fires. When a circuit is carrying more electricity than it can safely manage, the breakers “trip” and break the circuit, overloading a circuit can produce enough heat to start a fire.

There are two basic causes of circuit overload. The primary problem is that there are too many devices utilizing too many amperes (amps) at the same time. The amount of electricity flowing across a circuit is measured in amps. Consider the amount of water that passes through a pipe. Most branch circuits have a 15- or 20-amp rating displayed on or near the breaker switch.

Can salt put out a fire?

Baking soda chemically extinguishes the fire, while salt smothers it almost as efficiently as covering it with a lid. But you’ll need a lot of each–throw handfuls on top of each other until the flame goes out.

Can you use sand to extinguish an electrical fire?

Can you smell electrical fire?

An electrical fire emits a strong odor of burning plastic at first. The short could be in the outlet or the wire within the wall, and it can be difficult to find. According to experts, most warning indications of electrical fires are undetectable and odorless. If you smell something electrical burning, consider yourself lucky.

It’s critical to understand how to deal with electrical fires and how to spot them if they occur. Electrical fires can be easily averted, such as those caused by cables, outlets, and other electrical equipment. It’s also crucial to know what to do if a fire breaks out and how to put it out.

Installing lights with the suitable wattage in fixtures, child tamper-proofing outlets, watching for buzzing or flickering lights, shutting off space heaters before going to sleep, and keeping them away from any easily combustible objects are all ways you may help prevent fires.

Electricity is a fantastic innovation that continues to give us tremendous conveniences every day, but it also comes with risks that we must be aware of to avoid fires or other problems.