Everything You Need To Know About HRC Fuse

Protecting your electric circuit and the associated appliances should be among your top priorities. One way of achieving this goal is using a High Rupturing Capacity (HRC) fuse.

HRC fuses are among the unique types of fuses that you will find in the market. They come in different specifications, designs, and even types.

Do you wish to know more about HRC fuses? Read on as we lay down all the truth about them.

What is an HRC fuse?

A high rupturing capacity fuse or HRC fuse is a type of fuse that has the full capacity of accommodating or carrying heavy current for a considerable period. During that time, the faulty electric line will be worked on and the fuse will not blow off

However, if the fault is not removed, then the fuse will eventually blow off.

From the definition, you can tell that HRC is quite different. This is unlike other fuses that blow off immediately they detect an electrical short circuit or fault.

So, I hope that at this point you have some clue why it is referred to by the name “High rupturing capacity”.

– High current carrying capacity: This is one of the main characteristics of HRC fuses. They can carry high currents without blowing off immediately if you detect a fault in your circuit or appliance. However, if you do not remove the fault, then the fuse will blow off eventually.

– Slow blow: Another characteristic associated with HRC fuses is a slow blow. This means that they blow off after an extended period or a delay. They do not blow up immediately as soon as there is a fault in your circuit or appliance.

– Low voltage drop: With this feature, it simply means that they do not lose as much energy as other types of fuses when interrupting a current. Thus, they are widely used in applications that require high currents.

– Flameproof: There is no denying the fact that most of these fuses are flameproof and waterproof. This makes them suitable for use in electrical appliances and circuits where there is a risk of fire or water damage. However, you are likely to enjoy this feature from high-end HRC fuses.

– Low impedance: These fuses have a very low impedance. This means that they have very low resistance. This makes them suitable for use in applications that require high currents.

– High current rating: The rupturing fuses have a high current rating. This means that they can carry very large currents before blowing off. They are therefore used in applications where there is a high risk of fire or water damage.

– High voltage rating:  This simply means that they can withstand and interrupt voltages higher than normal fuses before blowing off. 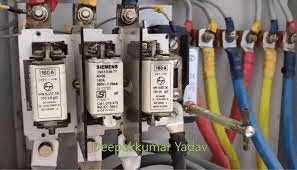 Let’s first understand that like other fuses, the HRC fuse is directly connected to the electric circuit. The normally rated current of the circuit won’t have sufficient power to break down the HRC fuse. Isn’t this how most fuses work?

Well, what if there is an overload of current in the circuit? The fuse element of most fuses will melt hence stopping the supply of current to the circuit.

Things are slightly different with the HRC fuse. In case of an overload, the fuse element will not blow off instantly.

The HRC fuse will first heat up. This means that the current will be increased by a factor of 5. This is because the HRC fuse has a high surface temperature.

As we have mentioned, HRC fuses are not all the same. The main types that you are likely to find in the market include;

Let’s have a brief look at these types of high rapture capacity fuses. From there, you will know which one is perfect for your application.

This type of high rupturing capacity fuse is mainly used on small to medium voltage devices. They are used in applications where high power is not required.

This type of HRC fuse is mainly used on medium voltage devices where there is a higher demand for power.

It is designed to be used with an AC ranging between 400 and 500 volts.

This type of HRC fuse is mainly used on high voltage devices where there is a need for a higher power.

Construction and Components of HRC fuse 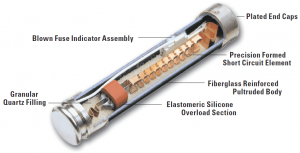 A high rupturing capacity fuse is a simple fuse that comprises these parts;

These components work together to achieve the ultimate goal of a fully-functioning HRC fuse.

The HRC fuse element is made of high-quality, low-resistance grade tantalum and niobium alloy. The HRC fuse element has excellent mechanical and thermal properties that enable it to withstand a large current supply for long periods of time without melting.

The HRC fuse element has a very high melting point that makes it resistant to melting during an overload situation. This makes it an ideal choice as a protection device for sensitive applications such as power transmission systems, PLCs, computerized equipment, and other similar circuits where high current supply from any source could cause damage due to voltage overshoot or overvoltage conditions.

The filling powder used in most HRC fuses is a blend of powdered tantalum, niobium, tin, and aluminum. The HRC fuse is filled with the powder mixture by means of a special machine that is operated manually or automatically. The HRC fuse is sealed with epoxy resin to protect it from moisture and other contaminants.

This provides excellent protection for your HRC fuses from mechanical damage during shipment or storage as well as during installation practices on site.

The housing is an aluminum alloy component that covers all sides except for the top side of the HRC fuse elements, which are left exposed.

It provides mechanical support for all other components of the HRC fuse while also protecting them against external physical damage.

The construction of the HRC fuse is done in a way to make all the above components work together smoothly. The manufacturers carefully select the materials that will make up each component of the fuse.

The regulations for the  fuse state that the components must be manufactured and assembled to comply with all these standards. The components are made of only the best materials and are tested for quality.

Safety is another aspect that manufacturers consider during the construction of an HRC fuse. The HRC fuse must meet high safety standards as they are used in critical applications.

The components of the HRC  are designed to operate reliably and safely. The components must also be able to withstand the external physical conditions they may encounter during their lifetime.

Another vital aspect that manufacturers consider is the design. The components of the high rupturing capacity fuse are designed in a way that they can be assembled easily. It should also be easy to install the element to the circuit.

The HRC fuse is manufactured in different sizes depending on its application. The HRC fuse with a large capacity is designed to be used in applications such as power plants and petrochemical plants where there is high demand for power.

The HRC fuse with smaller capacities is used in smaller applications such as motor vehicle engines where there is a low demand for power but high demand for protection against component failure. 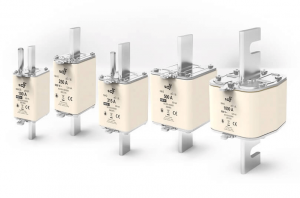 The top benefits of this fuse variant include;

-Cost-effective: HRC fuses are cheaper than most of its alternatives in the market.

-Reliability: These fuses are known to be very reliable and can withstand external conditions.

-Safety: Are you worried about the safety of your device or even the electric circuit? Here is a perfect alternative for you.

-High-breaking capability: Given its working principle, the fuse won’t just break off instantly due to overload. It will support the circuit for a considerable period.

-Compatibility: Would you like to incorporate this fuse into your electric device? You don’t have to worry as these fuses are compatible with most of the components used in power generation.

-High durability: HRC fuse is known to be durable and is resistant to external conditions such as moisture, dust, and temperature. The fuse is likely to serve you for long.

-Cannot be reused: Once your fuse has blown off, it will not be possible to use it again.

-The fuse can cause overheating of the components near it. This is because it relies on its heating property to manage current overload.

-You will have to change the fuse after every action so as to maintain its efficiency and reliability.

Where can I buy HRC Fuse?

The best alternative is to buy directly from HRC fuse manufacturers in China. You will be sure of getting a quality high rupturing fuse and associated after-sales support.

At ICRFQ, we can connect you to reputable manufacturers and suppliers of HRC fuse. We are a sourcing agent that you can trust when it comes to electric components in China. All you need is to contact us and send brief information about the fuse that you want. We will work tirelessly to deliver what you want.