In electrical installations, isolators and circuit breakers are commonly utilized. However, they serve various purposes. The differences between the two will be discussed in this article. Continue reading to find out more about them.

What is an isolator, and how do they work?

The operating idea of an electric isolator is extremely simple because it can be operated manually, semi-automatically, or fully automatically. These are sometimes employed as switches, referred to as electrical isolator switches. Depending on the situation, this switch can be opened or closed. However, in some cases, such as transformers, electrical transmission lines, and grid stations, these are permanently arranged in a fixed location to preserve isolation.

If the electrical isolator does not have an arc quench mechanism, it should be used once there is no potential of current passage throughout the circuit. As a result, no live circuits must be open; otherwise, the isolator procedure will close them.

An isolator can be operated locally or through a mechanical mechanism from a remote place. Because the motorized operation is more expensive than manual operation, a decision must be made before selecting an electrical isolator for the system that operates manually or mechanically is optimal.

What is a Miniature Circuit Breaker?

A microcircuit breaker, or MCB, is an electromagnetic device encased in molded insulating material. The major function of an MCB is to switch the circuit, i.e., to open the circuit (which has been connected to it) automatically, when the current flowing through it (MCB) exceeds the value at which it is set. If necessary, it can be turned on and off manually, just like a standard switch.

The size of the overcurrent controls the operating time of MCBs, which are time-delay tripping devices. This means that these are activated whenever an overload lasts long enough to threaten the circuit under protection.

As a result, MCBs aren’t affected by transient loads like switch surges or motor starting currents. In most cases, they’re designed to operate in less than 2.5 milliseconds for short circuit failures and 2 seconds to 2 minutes during overloads (depending on the current level). An MCB is a molded insulating material that encases a whole enclosure. This ensures that the housing is both mechanically and thermally sound.

Incoming and outgoing wires are connected to a fixed and movable contact in the switching system. Depending on the circuit breaker’s rating, the metal or current-carrying portions are electrolytic copper or silver alloy.

In the event of an overload or short circuit, an electric arc forms as the contacts separate. Modern MCBs are built to handle arc interruption operations involving metallic arc splitter plates for arc energy extraction and cooling.

An insulating substance keeps these plates in place. Arc runner is also included to push the arc created between the primary contacts. Magnetic and thermal tripping systems make up the operational mechanism.

A composite magnetic system with a spring-loaded dashpot and a magnetic slug in a silicon fluid, as well as a regular magnetic trip, make up the magnetic tripping setup. A current-carrying coil pushes the slug against the spring towards a fixed pole piece in the trip arrangement. When the coil produces a significant magnetic field, the magnetic pull on the trip lever develops.

Regardless of the location of the slug in the dashpot, the strong magnetic field produced by the coils (Solenoid) is sufficient to attract the armature of the trip lever in case of short circuits or heavy overloads.

Bimetal strips are made up of two metals, typically brass and steel. Along their length, these metals are riveted and welded together. Normal currents do not cause the strip to heat up to the point of tripping, but if the current exceeds the rated amount, the strip will be warmed, bent and the latch will be triggered. Bimetallic strips give certain time delays in response to specific overloads. 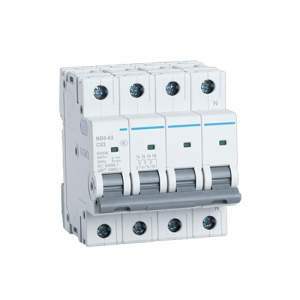 The role of the moving and static contacts is to make or break the circuit before and after it fails. The technical requirement of the small circuit breaker contact is to make and break the limit short-circuit current and the circuit current below it stably and reliably. At the same time, it requires a current capable of long-term operation, with no significant wear and tears after the action has been completed within the required service life.

Magnetic and thermal trips are used to operate the microcircuit breaker. The magnetic trip device comprises a composite magnetic system with a spring-loaded buffer and a magnetic spring plug in the silicon fluid, and a standard magnetic stripe. A bimetal strip surrounds the thermal tripping mechanism, and the heater coils are coiled around it to generate heat based on current flow. 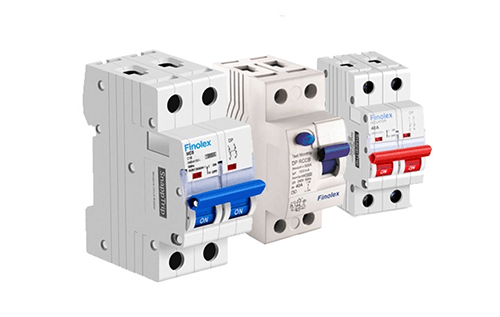 Differences between Isolator and MCB

The following are the distinctions between an isolator and an MCB.

The isolator is a device that isolates the load from the main power supply. An MCB is a circuit breaker that protects electrical cables from the harmful consequences of high currents. Although the MCB trips the circuit, the open contact of the MCB cannot be seen from the outside.

(Handle may be damaged) As a result, it is not advisable to touch any electrical circuit by turning off the MCB. An isolator is required for increased safety. The isolator is a mechanical switch that isolates a portion of the circuit from the rest of the system to do maintenance safely. In electrical installations, isolators create, carry, and interrupt circuit current.

The protective function is the major distinction between an isolator and an MCB. There is no protection function on the isolator.

It serves as an electrical circuit’s isolating switch. Overload and short circuit protection are provided by MCBs (miniature circuit breakers). It also can isolate itself.

Although the MCB trips the circuit, the open contact of the MCB cannot be seen from the outside. (Handle may be damaged) As a result, it is not advisable to touch any electrical circuit by turning off the MCB. An isolator is required for increased safety. The isolator is a mechanical switch that isolates a portion of the circuit from the rest of the system to do maintenance safely. Isolators are used to create, transport, and interrupt circuit current in electrical installations.

Location in The Circuit

Isolators are frequently utilized as a house’s main switch. Isolators are used in residential, commercial, and industrial applications to switch under load (even inductive). Their major purpose is to make it possible to maintain the electric system safely. They also ensure that the downstream circuits are completely insulated. Upstream protection against short circuits and overloads is required for isolators.

Because it can only operate under closed load, the isolator is an off-loading device. This signifies that the isolator cannot be closed under any current circumstance. If you carefully study the user handbook for the isolator, you will notice that it is not to be utilized in the power-on state.