It is commonly employed as an alternative to BC547 transistors to power the circuit’s heavy loads. The voltage across an open collector and emitter, or VCEO, is 40 V. If you need to switch high-current loads, the KSP2222A NPN transistor is your best bet. This page provides a summary and circuit diagram of the KSP2222A transistor.

What is the KSP2222A Transistor?

The gain of a transistor, often in the range of 100 to 300, indicates how much that transistor can boost the voltage signal. At most, 600 mA of current can flow via the collector terminal. Multiple loads over 600 mA in total current consumption are therefore not supported. Base current IB, the input supply delivered to the base terminal for transistor biasing, is capped at five mA.

600 mA can flow between the collector and emitter in an entirely biased NPN transistor. Maximum usual voltages between the base-to-emitter (VBE) terminals or collector-to-emitter (VCE) are 600 mV and 40 V, respectively; this is the saturation region. When the transistor’s base current IB is turned off, the device enters a reverse biased, “off” state. We refer to this area as the “cut-off” zone. 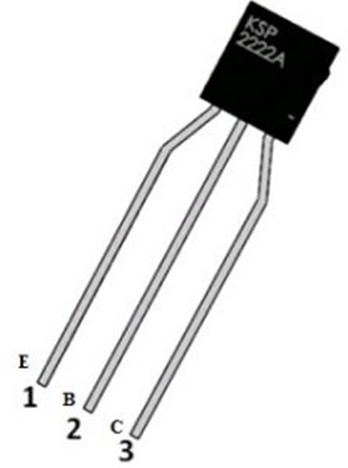 The specifications for the KSP2222A transistor are as follows:

● This transistor has a To-92 package type and is a bi-polar NPN high current transistor.

● The collector current (IC) is capped at 600 milliamps (continuous)

● Five milliAmps is the highest Base Current IB allowed.

● At the collector terminal, 0.625 Watts of electricity are dissipated overall.

● The highest noise level is 4 dB.

● The working and storage junction temperatures range from -55°C to +150°C.

The KSP2222A is a 2N2222A direct replacement and is also an NPN bipolar general-purpose transistor with many uses. Collector current Ic and Collector-to-emitter voltage VBE are the only two distinguishing characteristics of the two NPN transistors. This transistor functions as an amplifier and a switch in most applications.

KSP2222A Transistor Working as a Switch

Each transistor’s primary and default role is that of a Switch. It functions similarly to a mechanical switch but is operated by electrical signals instead of levers. The image below is a simplified version of the circuit used to turn a motor or load on and off using a KSP2222A NPN transistor. 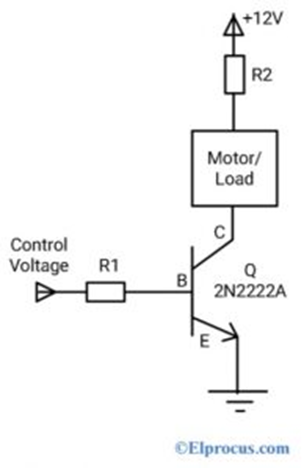 Here, the base current through the NPN transistor is restricted by base resistor R1. That way, transistors are protected. When the R2 resistor is wired into the motor’s ground, it regulates the amount of current that can travel into the collector.

When the voltage between the emitter and base terminals of the KSP2222A NPN transistor approaches and exceeds the threshold voltage, which is 6 Volts, the transistor begins conducting. When designing a circuit, it’s essential to choose the resistor carefully.

KSP2222A Transistor Working as an Amplifier

A transistor’s gain (HFE) is typically employed to magnify a current or voltage, making this application the most common one in which transistors are used. We can look at the schematic to further understand how the KSP2222A transistor fits into a common emitter (CE) amplifier. For voltage signals in the low-frequency region, the CE mode amplifier is the most used type of amplifier circuit (for example, audio signals).

Two resistors, R3 and R4, connect the supply voltage to the ground and the NPN transistor’s base and emitter pin, respectively, in the above circuit. The input voltage is connected to its base terminal to set the threshold voltage for the NPN transistor. A potential divider is created by connecting R6 and R4. Capacitors C1 and C2 are utilized to create a filter.

The circuit’s capacitor and resistor settings are presumed to be appropriate for the assumed application and NPN transistor. The primary drawback of this amplifier circuit is that it cannot handle voltage signals at very high frequencies. Op-amps (a collection of transistors in a single package) is utilized for fast and simple amplification in such situations.

We hope that this article has been helpful to you. We have more interesting articles on our website that could benefit you, just like this one, so feel free to browse through our website to learn more.

Please contact ICRFQ if you have any more questions or would like to place an order for a KSP2222A transistor. In China, we are the top choice for electronic component distribution.