The LM2903N is a dual comparator IC chip from the ON company. Some of you may be unsure what a comparator is. So let’s study a little about it before moving on.

A comparison is made between an analog voltage signal and a reference voltage using a comparator, a circuit type. The comparator’s inputs are analog signals, but the output is either 0 or 1, making it a binary device. If the sign of the positive and negative voltages does not change, the output does not change whether the difference between the positive and negative voltages widens or narrows.

Additionally, because the operational amplifier often has a considerable delay period, it cannot meet the actual demand. Although these modifications will only have a minor overall impact, it is possible to modify the frequency response characteristics of the comparator to have a brief time delay. Hysteresis circuits are frequently included in comparators as an additional safety precaution to avoid output oscillation. The comparator’s threshold is constant, but different comparators have different thresholds—some have just one, while others have two.

Comparators are constructed out of high-gain differential amplifiers, and the output of these amplifiers must be compatible with the logic gates used in the digital circuit. Since the gain is so great, the output can become saturated with only a small change in the input voltages.

Depending on which band the input voltage is in, the gate’s output voltage will either be in the low logic voltage band or the high logic voltage band. This is determined by which band the input voltage is in. Comparators have traditionally been built with analog operational amplifiers (op amps); however, a dedicated comparator chip will nearly always be quicker than an all-purpose operational amplifier utilized as a comparator. In the past, analog op amps have been used to build comparators. A dedicated comparator chip might include different characteristics like an accurate internal reference voltage, a clock-gated input, and an adjustable hysteresis.

An example of an interface that can be performed between a digital logic interface and a dedicated voltage comparator device is the LM339 chip (to a TTL or a CMOS). The output is a binary state, which is often utilized as an interface to link digital circuitry to signals derived from the real world (see analog-to-digital converter). When there is a constant voltage source in the signal channel, such as when it comes from a DC adjustable device, a comparator’s operational behavior is functionally equivalent to that of a cascade of amplifiers.

The output voltage will not fall into one of the logic levels when the voltages are nearly equal. As a result, analog signals will make their way into the digital realm, which will have difficulty foreseeing repercussions. To be sure that the range will be decreased to its shortest possible amount, the amplifier cascade uses a relatively high gain. In this particular circuit, bipolar transistors make up most of the electronic components.

The input impedance of the stages should be kept as low as possible to prevent interference while working with extremely high frequencies. The massive, slow p-n junction bipolar transistors’ saturation is kept to a minimum. This prevents the extended recovery times that would otherwise follow in the absence of this change. Utilizing fast and compact Schottky diodes, such as those typically found in binary logic systems, is one way the performance can be significantly improved. Despite this, the performance is still subpar in comparison to that of circuits with amplifiers that make use of analog signals. In the context of these devices, the slew rate is useless and entirely irrelevant. This matches the voltage and current gain after each amplifier and causes the signal to be divided across eight ports to accommodate applications in flash ADCs. Due to this setup, resistors take on the role of level shifters in the circuit. 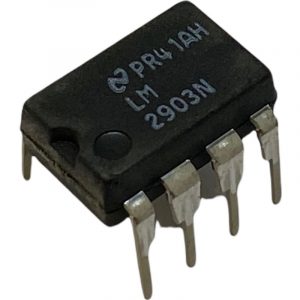 The total offset voltage specification of the precision voltage comparators in the LM193-N series is as low as 2.0 mV at most, and they are designed to operate from a single power source over a wide voltage range. Its low power supply current consumption makes it compatible with a wide range of power sources without requiring any adjustments to be made to the device’s design. Despite receiving power from a single source, the input common-mode voltage range of these comparators covers ground, making them unique.

To interact directly with CMOS and TTL, the LM193-N series was created. The LM19-N series will interface directly with MOS logic when operated from both plus and minus power supplies, where its low power consumption is a clear advantage over conventional comparators.

Our goal for today is that you acquire some knowledge. If you are interested in learning more, our website contains further articles much like this one. Please use the comment box below to ask any questions you may have, and we will respond as soon as possible.

If you need a quote for LM2903-N or any other electronic components that you may think of, then contact ICRFQ. We are the best electronic distributor in china. We will ensure you are taken care of.