The LM3886TF is widely considered to be the best audio chip amplifier available to the DIY market. Its widespread use includes its inexpensive cost, small footprint, and lack of distortion. Hi-Fi amplifiers might cost several thousand dollars or more for top-tier models, but with the correct layout and component selection, you can build one that sounds just as good.

Texas Instruments recently developed a brand-new integrated circuit design for a high-power audio amplifier known as the LM3886T. A fully insulated box makes up the TF that sits behind the LM3886TF. Its power is greater when compared to that of the LM1875T.

The maximum continuous undistorted average power of 68W when working at the rated voltage has a protective mechanism against overvoltage, overcurrent, and overheat that is relatively complete. The most crucial point is that it can automatically resist the current’s impact whenever the switch is turned on. This makes it possible for the speaker to work in a risk-free environment. 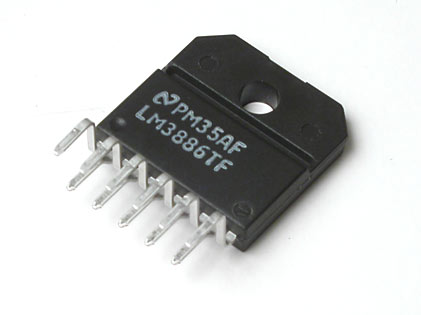 ● Capable of an instantaneous peak output power of 135W.

● Internal Current Limiting provides output protection against a short to Ground or the supply.

● It is used in stereo components.

● The Compact Stereo uses it.

● It is used in self-powered speakers.

● It is used in amplifiers for surround sound.

● It is used in premium stereo TVs.

Texas Instruments (TI), a global semiconductor company with operations in 35 nations, is mostly a representation of its workforce. We are a group of problem-solvers working together to use technology to impact the world positively. This effort began in 1958, when a TIer presented the world with the first working integrated circuit, and continues today with more than 30,000 TIers around the world who design, manufacture and sell analog and embedded processing chips.

What Is An Integrated Circuit Amplifier?

An integrated circuit amplifier is a collection of active and passive components contained in a small space and can increase either the signal’s voltage or its current level. The active components are transistors, semiconductor devices with three terminals, and the ability to gain current. Current gain is the phenomenon in which a minor change in current results in a proportional change in the output of an integrated circuit amplifier.

Separate electronic circuits, each with its transistors, resistors, and capacitors, served as the basis for the prototypes of what would later become integrated circuits. The integrated circuit amplifier, also known as a chip amplifier or a microchip amplifier, was developed due to efforts to lessen the demands placed on the weight and size of stationary and portable electronic devices and equipment. There are several applications in which the matching of transistors is essential to generate the highest possible fidelity reproduction of the input signals.

What Exactly Is An Audio Power Amplifier?

An electronic amplifier known as an audio power amplifier (sometimes referred to as a power amp) increases the volume of low-power audio signals to a level suitable for driving loudspeakers or headphones.

For example, these signals can come from a radio receiver or an electric guitar pickup. Many sound systems, such as sound reinforcement, public address, home audio systems, and musical instrument amplifiers, like guitar amplifiers, contain audio power amplifiers.

How Do Audio Amplifiers Work?

Before being transmitted to the speakers, the signal received from an input device, such as a laptop, turntable, or CD player, is amplified by an amplifier, which makes a larger duplicate of the signal than the original one received. Your home’s mains electricity is used to supply it with the power it needs to carry out these functions. This electricity is then delivered straight to the amplifier’s power supply.

What Does An Audio Power Amplifier Do?

An audio power amplifier, often known as a power amp, boosts the volume of low-power electronic audio signals, such as those coming from a radio receiver or an electric guitar pickup, to a level that is sufficient for powering loudspeakers or headphones.

Which Is Better, A Power Amplifier Or An Integrated Amplifier?

In most cases, a preamplifier and power amplifier will provide superior sound quality. Even though balanced output has become the norm, separating the switching circuitry from the amplification stage and using two independent power supplies can help reduce the amount of internal interference introduced into the signal.

Does An Amplifier Improve Sound Quality?

Do You Need An Amplifier For The Speakers?

Powered speakers are self-sufficient and do not require an amplifier. Because they come with an amplifier already built in, people refer to them as “powered speakers.” This is how the term got started in the first place. Without the need for a separate amplifier, you may be able to connect the speakers to a variety of different audio sources if the speakers have many input possibilities.

Thanks reading… If you have any questions regarding this article or any other post that can be found on our website, please feel free to leave them in the comments section below, and we will do our best to respond to them.

Don’t hesitate to contact ICRFQ if you have any questions or want to place an order for LM3886TF. We are committed to providing you with the highest quality electrical components at the most affordable pricing. In China, we are the premier distributor of electronic components.