The M5218AL are integrated circuits made of semiconductors developed to be used as a low-noise preamplifier in audio equipment and as a general-purpose operational amplifier in other electronic devices. An 8-pin DIP, SIP, or FP can include two low-noise operational amplifier circuits that display high gain internal phase compensation and low distortion for various applications for general electronic equipment. These amplifiers also have a low noise level.

The operational amplifiers 4557, 4558, 4559, and 741 are essentially indistinguishable from the devices since they have virtually identical characteristics. The units are versatile enough to be utilized in various ways, including as a single power supply type and amplifier in portable equipment. Because it has a large load current, you can also use it as an amplifier for your headphones. 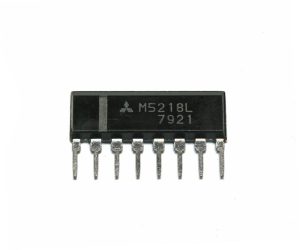 What Does Low-Noise Amplifier (LNA) Mean?

Low-noise amplifiers are an essential component of a receiver circuit, which is responsible for the processing and informational conversion of a signal that has been received. LNAs are intended to be placed close to the receiving device to ensure that interference causes the least amount of signal loss possible.

Because the received signal is already weak, adding more noise would severely distort it; thus, they add the bare minimum required. As the name suggests, this is because any more noise would severely contaminate the signal. An LNA is utilized when the signal-to-noise ratio (SNR) is high, the SNR needs to be reduced by around fifty percent, and the power needs to be increased. Because it is the first component of a receiver to intercept a signal, a low-noise amplifier (LNA) plays an essential role in communications.

What is an Operational Amplifier?

The adaptability of the operational amplifier has contributed to its widespread use as a component in analog circuitry. When an op-amp circuit employs negative feedback, the parameters of the circuit, such as gain, bandwidth, input and output impedance, and so on, are defined by the external components. These characteristics have little dependence on the temperature coefficients or engineering tolerances in the op-amp itself.

Op amps are found in various modern electronic devices, including those utilized in multiple fields such as consumer electronics, industrial electronics, and research electronics. However, certain integrated or hybrid operational amplifiers with specified performance characteristics might cost over US$100 in small quantities. While many typical IC op amps only cost a few cents each, some amplifiers can cost over US$100. Op amps can be packaged as standalone components or incorporated into more complicated integrated circuits in various capacities.

What is Dual Power Supply?

A power supply that operates on regular direct current is known as a Dual power supply. It can supply a voltage in either the positive or negative direction. In addition to preventing harm to the system, it guarantees a constant power supply to the equipment in question.

A significant number of electrical circuits call for a DC power supply. The device’s electronic and electrical components are supplied with power via a dual power source. Both positive and negative potentials are made available by the dual power supply, which is connected to the ground. Electronic circuits, which typically consist of tubes or transistors, call for a supply of direct current (DC).

DC voltage was required, for instance, for the plate, screen grid, and control grid in tube amplifiers. In a similar vein, transistors’ emitter and collector biases require the presence of DC. Also, operational amplifiers require two separate power supplies. In the circumstances like this, the usage of batteries is uncommon because they are expensive and need to be frequently replaced.

Why do We Need a Dual Power Supply?

The need for a Dual power supply in OPAMPS

In most cases, operational amplifiers are required to have swinging bipolar output voltages. In response to the typical input signal range, either one will go in the positive or the negative direction.

As a result, Opamps consists of two tracks. Therefore, to give power to the Opamps, we will want a Dual power supply.

The need for a Dual power supply in Generators

A dual power supply is required when two distinct power circuits have to be run off the same power source without the latter being taken offline. Because of this, we can undertake maintenance and other types of work on electrical equipment without taking the unit offline.

The need for a Dual power supply in DIY

We may use a dual power supply in DIY projects as a mobile phone charging circuit, a power bank circuit, battery-less power circuits, and any situation requiring a direct current power supply. Additionally, we can use this Dual power supply for any power source that requires alternating current.

We hope that you have gained knowledge from this article. Please feel free to ask any questions you may have in the space below, and we will try our best to respond. Additionally, our website contains a wealth of helpful information

If you’re in the market for M5218AL or any other type of electrical component, ICRFQ is the place to be. Just call us, and we’ll take care of whatever you require.