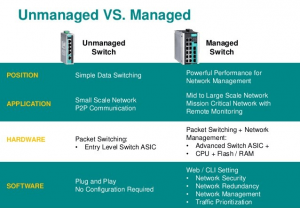 A network switch serves as the system’s ” brain when it comes to network design. ” Networking hardware connects all devices on a LAN (Local Area Network) and redirects and forwards data to the correct location. When it comes to running a business, it’s critical to have a network switch that can successfully meet all of your IT requirements.

Switches exist in a variety of sizes that allow them to have any number of ports up to 48, but the distinctions between managed and unmanaged switches are more subtle. We’ll describe the two categories, examine their differences, and assist you in determining which is best for you.

A managed switch allows you to manage, set up, monitor, and troubleshoot network issues. For identification and addressing, each switch has its own IP address. You can set up traffic controls, prioritize channels based on data relevance, evaluate performance issues, deploy patches remotely, and even construct new virtual networks for segmentation. You have complete control over the operational parameters for your network ports.

Unmanaged switches lack the security provided by managed switches. They can immediately shut down detected threats, restrict unwanted access, and encrypt communication since they can monitor and manage network events. They also have built-in redundancy, which means data is copied and recoverable in the event of a device or network failure.

In terms of applications, controlled switches are most commonly used to monitor and regulate traffic as part of the industrial network backbone. They’re also employed in the connection of mission-critical equipment to networks.

The usage of controlled switches in energy parks is an outstanding example. They can “supervise” the entire system, checking component status and collecting data on a regular basis to keep machines functioning correctly. If a data connection fails, the switch detects it. It switches to another port, allowing the device to continue operating while the switch sends a report to the appropriate staff about the failure. 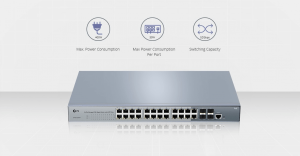 Unmanaged switches have a single purpose: to connect Ethernet devices to the internet so they may speak with one another. Some refer to unmanaged switches as “the man in the middle.” It accomplishes its goal and adds more ports to your network; however, it lacks intelligence and isn’t a visible network device.

Unmanaged switches cannot regulate network traffic because they do not allow for configuration or setup; this makes them simple to implement. Just plug it in and go! Unmanaged switches are frequently used in industrial environments to link edge devices or add temporary groupings of devices to a more extensive network.

On the one hand, an unmanaged switch allows you to plug and play devices into your network right away, but a managed switch gives you more control. However, there are significant variances, so it’s time to examine each’s features, performance, security, pricing, and applicability.

Unmanaged switches are simple devices that link Ethernet devices with a fixed configuration that you can’t change. They’re frequently used for small networks or to add transitory systems groups to a bigger network. On the other hand, a managed switch allows you to manage, configure, and monitor your LAN’s settings.

Examples of these settings include LAN traffic restrictions, channel prioritization, and the creation of new virtual LANs to keep smaller groups of devices separated and better manage their traffic. Redundancy capabilities in managed switches replicate and recover data in the event of a machine or network failure.‍

When it comes to performance, unmanaged switches have the advantage of plugging and playing with your network right away. There’s no need to configure anything, and it comes with the built-in quality of service services to assure smooth operation. You may prioritize channels at will with a controlled switch, ensuring that you get the best performance where you need it.

Furthermore, capabilities such as Priority SNMP, which allows for remote network troubleshooting, make it even easier to monitor for any issues affecting performance and, if necessary, execute fixes.

Overall, unmanaged switches have relatively basic security. They’re protected by ensuring that there are no vulnerabilities from one system to the next, and accessories like a lockable port cover can ensure that no one tampers with the device directly. Managed switches offer many essential security features, including the capacity to monitor and regulate the network to shut down active threats, data protection, control, and management.

Varied managed switchers include different security capabilities, such as network communication encryption, access control lists that keep unauthorized users out, and VLANs, which can give people temporary or limited access to your network. It’s worth mentioning that managed switches give you a lot of control over your network, which may be a problem. As a result, they should be closely monitored and managed, with only a network specialist having full access.

When it comes to price, the comparison is straightforward. Unmanaged switches usually cost between $50 and $100 (USD). The price is generally determined by the number of ports required by the switch. However, you could expect much greater prices with managed switches. These can cost anywhere between $1500 and $2800 (USD) per port. The prices are influenced by the various features you pay for, such as security and access restrictions and the switch’s configurable capabilities.‍

When choosing a switch, size isn’t the only consideration; you may obtain switches with any number of ports, both managed and unmanaged. Smaller networks, such as those used by small businesses, the home, a single office, and so on, are more likely to employ an unmanaged switch. Managed switches are better suitable for enterprise-sized enterprises with a considerably greater network scope or those who use data centers and need more control over their network traffic.

Managed vs Unmanaged Switch: How to Choose?

Network managers must select the best network switches to ensure that the entire network system runs smoothly in many circumstances. But how do you pick the right switch for your network’s needs? Which is better for you: managed or unmanaged? You can first ask yourself a few questions before making a decision.

Where do you want to deploy the switch?

Security is extremely important for huge, medium-sized, or tiny businesses. In the case of purposeful attacks on security protocols, managed switches prohibit unauthorized access. Meanwhile, because enterprise networks are characterized by heavy workloads and large amounts of traffic, managed switches are advantageous.

How many users or devices need to connect to the network?

Unmanaged switches are an excellent alternative for tiny enterprises or household networks that do not have many connections or traffic to handle. They are less expensive than managed switches and lack advanced features like VLAN (for separating network traffic).

On the other hand, a managed switch is an excellent choice if there is a lot of traffic in the network at the same time. Aside from the VLAN we just described, there’s also redundancy, ACLs, and STP, all of which can help you avoid downtime and data loss, which can lead to significant financial issues. STP support provides an alternative routing for traffic in the event of a link or cable failure.

Do you need to control network traffic?

If you answered yes, a managed switch is the right solution for you. It allows you to manage, configure, and monitor LAN settings, such as LAN traffic restrictions, channel prioritization, and VLAN creation, which can divide the traffic of various users to safeguard their information security.

Do you have professionals?

What are these switches used for?

Do you wish to use it to increase network capacity, or do you simply require more ports for your devices that connect to edge switches? The former indicates that you need a controlled switch capable of providing high-speed connections and increased capacity. On the other hand, unmanaged switches are better for meeting your demands because they offer the same number of available ports as managed switches at a cheaper cost.

The number of users the network must accommodate will determine how many ports the switch needs to have; the larger the firm, the more ports are necessary.

Consider how many switches will be added in the future if the network and business are expected to develop. Or if one or two fully managed switches would be more practical in the long term because they can be configured manually and are more scalable.

If the network is continually moving significant amounts of data, such as wireless devices, additional printers, real-time services, voice over the internet, and so on, the switch’s technical specifications should be able to keep up. Only controlled switches can be deployed to prioritize and manage traffic. Finally, most firms’ principal aims are usually safe data and well-functioning networks.

Managed or Unmanaged? It is contingent on the business’s network needs to be assessed.

What level of network management does the company require? Is it possible to address network issues without causing downtime?

The Managed Switch is the sole option if the corporation requires network control. Still, the Unmanaged Switch is the more cost-effective option if the organization lacks the necessary budget or resources. However, where companies use wireless LANs, VOIP (Voice Over Internet Protocol), and real-time services, managed switches would provide the best experience as they can be configured according to a specific network’s requirements.

Switches serve as building elements for your wired industrial network. They establish a network connection between your devices to send data to the appropriate locations. At first, the appearance, managed and unmanaged switches appear to be quite similar: After all, they’re both used to connect gadgets in order to communicate!

On the other hand, comparing managed versus unmanaged switches is similar to comparing today’s smartphones to your first cellphone from the 1990s. The core function of each gadget is voice communication, but that’s where the similarities end. Which sort of switch you require depends on your application.

After answering these questions, I hope that you have a better understanding of the differences between managed and unmanaged switches. In conclusion, a managed switch is a great solution if you are comfortable administering a LAN and setting everything. Unmanaged solutions are appropriate for individuals who want to keep things simple and have limited finances.