MCB vs MCCB: What Is the Difference? 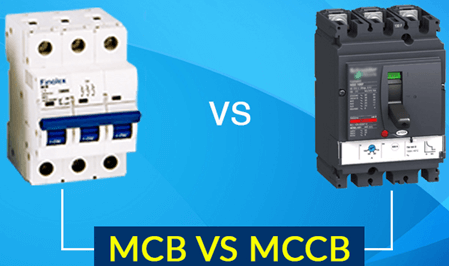 Most of us have heard the phrases MCB and MCCB in relation to electricity and power supply in today’s world. On the other hand, a layperson will have a hard time distinguishing between them. Even though both are employed as circuit breakers in an emergency, there are several key differences to be aware of. First and foremost, let us clarify the meanings of the abbreviations MCB and MCCB.

Then we’ll get into the details of what they signify. The difference between MCB and MCCB will be discussed first in this post. The MCCB stands for Molded Case Circuit Breaker, while the MCB stands for Miniature Circuit Breaker. Their distinctions are significant in the context of the application-specific electric circuit.

What is a Miniature Circuit Breaker (MCB)? 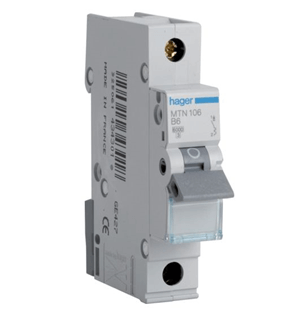 A Miniature Circuit Breaker, or MCB, is a working electronic device that prevents electrical circuits from overheating and causing fires. A short circuit is an electrical problem caused by an overcharge or a short circuit.

Back when this problem seemed intractable, we used fuse wire to protect circuits against over-current and overflow situations. The idea was simple: an over-current might “break” the fuse wire by rapidly heating and melting it, ruining the electrical contact while protecting the rest of the circuit.

The mini circuit breaker is an electronic component that immediately turns off the circuit when it malfunctions. It quickly identifies the short circuit’s leakage current. Due to their power capacities, MCBs are best suited for low-breaking-capacity residential applications instead of MCCBs, which are widely employed in the industrial sector.

The operation of the small circuit is relatively simple. The major purpose of these devices is to protect electronics against overcurrent. It features two interfaces, one of which may be moved and the other not. When the power level rises above a particular level, the moveable contacts are separated from the permanent contacts, causing the circuitry to open and disconnect them from the main supply.

What is a Molded Case Circuit Breaker (MCCB)?

Molded Case Circuit Breaker (MCCB) is an abbreviation for “molded case circuit breaker.” When the overall voltage exceeds the capacity of a small circuit breaker, another type of electrical device is used.

When it comes to operating principles, the MCCB has two sets: one for overheating and the other for overvoltage. When the temperature changes beyond normal, it possesses a bimetal copper-nickel contact that grows and shrinks.

Under normal functioning conditions, the contact allows electricity to flow through the circuitry. The connections will become hot and strained until they rupture if the current exceeds the preset limit. As a result, the circuit is disconnected from the power grid, protecting the equipment and infrastructure.

An MCCB with a higher version has a trip feature that can be changed. Depending on the situation, this circuit breaker can output amps as high as 2,500 or as low as 10. They come in a range of interruption ratings from 10,000 to 200,000 amps. The MCCB better serves High-power devices.

MCB vs MCCB: What Is the Difference? 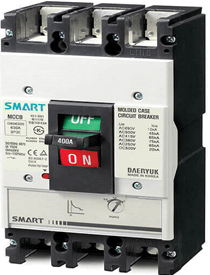 The significant difference between MCB and MCCB is that MCB stands for ‘Miniature Circuit Breaker’ and is used for smaller electronic circuits with a lower amperage range. In comparison, MCCB stands for ‘Molded Case Circuit Breaker’ and is used for bigger circuits with a higher amperage range and difference. Both breakers are long-lasting and widely employed to ensure the safety of the circuit and the infrastructure in which they are installed and used.

Miniature Circuit Breaker is abbreviated as MCB. The MCB immediately turns off the electrically wired circuit during any hazardous scenario in the power circuit, such as overcharge or short circuit, and is known as a breaker. Even though the MCB can be restored, the fuse may detect these circumstances and must be fixed.

It is a working device that prevents fires and other electrical hazards by protecting electrical lines and loads from excessive current. Because MCBs recover power quickly, they are safer to handle. MCBs are the most often used devices in residential applications to prevent electric current from flowing through the wire and provide short-circuit protection. MCBs are easy to reset and do not require any maintenance.

Because of their large power capacity and excellent breaking/resistance capability, MCCBs are commonly employed in industrial applications. Capacitor banks, generators, and the management of main electric feeders can all be protected with MCCBs. It has an adjustable overflow or earth fault protection setting and provides adequate protection.

Key Differences Between MCB and MCCB

The MCB and MCCB function in a very similar way. There are, nevertheless, numerous distinctions between them.

The abbreviation MCB refers to a small circuit breaker. Molded case circuit breaker (MCCB) is a circuit breaker with a molded case. Both devices provide Overcurrent and short circuit protection. They also have an isolation feature. You can quickly detach the load from the supply by using their handles.

The MCCB is similar to the MCB in terms of operation and use; however, the air-break mechanism is encased within a molded case housing constructed of a solid non-conducting material.

The MCB is a smaller version of the MCB. The diameter of one MCB pole is approximately 17,5mm. The MCCB has a significantly larger footprint than MCCB.

Accessories enhance the functionality of a circuit breaker. While MCBs have a limited accessory selection, MCCBs can accommodate a wide range of accessories.

Because of the physical size of three- and four-pole MCCBs, these accessories can be put internally, albeit there are certain limitations on the combinations that can be mounted together. A shunt trip or an under-voltage release, for example, can be used but not both at the same time. Interphase barriers and terminal shrouds are commonly used to offer IP2X ingress protection at the terminals due to these devices’ substantially larger physical size compared to MCBs.

As part of their compliance with criteria for suitability and safety, molded case circuit breakers and microcircuit breakers are rated for maximum interruption capacity, or ICU (Interruption Capacity Ultimate) and ICS (Interruption Capacity Service). MCCBs have a substantially higher breaking capacity than MCBs do. (maximum current 200 kA) Compared to an MCCB, this suggests that an MCCB can tolerate and break strong currents.

By adding modules or selecting electronic models, MCCBs can communicate with one another. All digital trip device protection, monitoring, and control information can be sent back to a central location via built-in connectivity options. This feature is not available on MCBs.

Adjustment of Current and Time Delay.

Location in the circuit

While MCCBs are commonly utilized as upstream breakers, MCBs are typically used in branch circuits. Large commercial and industrial installations employ MCCBs in their upstream circuits. MCBs are employed for small sub-circuit supply in commercial and residential settings.

MCCBs use an electric arc interruption system that permits very high-current short-circuits to be interrupted quickly. The contacts’ high opening speed, the magnetic field’s dynamic blasting action, and the arcing chamber’s structure help extinguish the arc in the shortest time feasible, limiting the value of the specific let-through energy I2t and the current peak. In comparison to MCB, MCCB has larger and more effective arching chambers.

The structure of the MCB is basic and safe, and it does not require any maintenance or inspections. The MCCB, on the other hand, is designed with numerous new parts and must be adequately serviced and examined. As a result, MCBs are not appropriate for applications that need frequent short circuit disruption.

When the MCCB trips due to an overload or short circuit, the handle will halt in the middle of the ON/OFF range, indicating the tripping state. After resetting, flip the handle to ON to remake. The released cradle and hook will be engaged when the handle is turned to the OFF position, and the mechanism will be restored to the OFF state to complete the reset. The MCB handle does not have a trip indicator in the center.

Circuit breakers are installed in buildings to provide energy and electrical equipment safety. When they experience a short circuit or an overload, they make sure to terminate the current flow to avoid fire hazards or other electrical concerns. As a result, professionals should install both the MCB and the MCCB to reduce the risk of error.

Simultaneously, choosing the correct MCB or MCCB is critical to ensuring the safety of your loved ones. Havells, a name known for high-quality electrical equipment and switchgear, offers a comprehensive range of circuit breakers for residential and commercial applications. Havells’ MCBs and MCCBs are extremely intelligent and dependable, ensuring that your haven is protected for a long time.

Circuit breakers are installed in buildings to ensure that energy and electronic devices are used safely. When they experience a fault current or overload, they provide that the current flow is terminated to avoid fire hazards or other electrical problems.

As a result, professionals must install both the MCB and the MCCB to avoid mishaps. Similarly, selecting the appropriate MCB or MCCB is crucial for guaranteeing asset and electronic device security. Both breakers operate on the same principles and are far more reliable than traditional fuse wire methods.