Everything You Need to About Microcontrollers (MCU)

In the technological revolution that has influenced modern life, the microcontroller has played a critical role. They are compact, adaptable, and inexpensive devices that may be implemented and programmed by experienced electrical engineers and amateurs, students, and professionals from other fields.

If you’ve ever wondered what your computer’s CPU does or what the variations between different types of microprocessors are, keep reading. In this article, you’ll learn how a computer can execute its job, whether it’s playing a game or spell-checking a text, using relatively simple digital logic approaches.

What Is a Microcontroller

A microcontroller is a simplified computer meant to perform a single simple program repeatedly. Microcontrollers are designed to do a single automated task in a single device, as pre-programmed by the user. They’re made to perform the same task over and over again. This is an embedded application, unlike the more versatile, general-purpose applications handled by complete microprocessors and CPUs.

Microcontrollers have a microprocessor as their main components, but it’s usually a much simpler and more dynamic CPU than most standalone MPs. Most microcontroller units can only complete a single, very specialized task. This implies it doesn’t require the complete range of capabilities that a normal microprocessor can provide.

The foundations of a microcontroller require that it works in concert with other types of components and electronic circuits, which are connected via printed circuit boards, to do this

This combination of a microcontroller and PCB-based equipment can be used to control, monitor, and influence the behavior of numerous systems and components

How Do Microcontrollers Work?

A microcontroller is a device integrated into a system and controls a single function. It accomplishes this by employing its core CPU to evaluate data received from its I/O peripherals. The microcontroller’s temporary data is saved in its data memory, where the processor retrieves it and decodes and applies the incoming data using instructions stored in its program memory. It then communicates with its I/O peripherals and performs the necessary operation. Microcontrollers are found in a wide range of devices and systems. Multiple microcontrollers are frequently used in devices to handle different devices’ jobs.

The Elements of a Microcontroller

According to the sequence of instructions supplied by the programmer, the CPU conducts arithmetic operations, handles data flow, and creates control signals. The designer cannot see the incredibly intricate circuitry necessary for CPU functionality. Writing code for microcontrollers is frequently a reasonably simple task, given to integrated development environments and high-level languages like C.

The microcontroller’s program—the (sometimes extremely extensive) list of machine-language instructions that tell the CPU exactly what to do—is stored in non-volatile memory. Instead of “non-volatile memory,” you’ll often find the term “Flash” (which refers to a specific type of non-volatile data storage).

Temporary data storage takes place in volatile memory (RAM). When the microcontroller is turned off, the data is lost. Internal registers likewise store temporary data, but we don’t think of them as a separate functional block because they are integrated into the CPU.

The input and output devices on the CPU serve as the processor’s interface to the outside world. The input ports receive data and provide it as binary data to the CPU.  The processor receives this information and transmits the required instructions to output devices, which carry out duties that are not controlled by the microcontroller.

Peripheral is a broad term that refers to a variety of supporting components. An I/O peripheral is required for a microprocessor because the processor uses it. 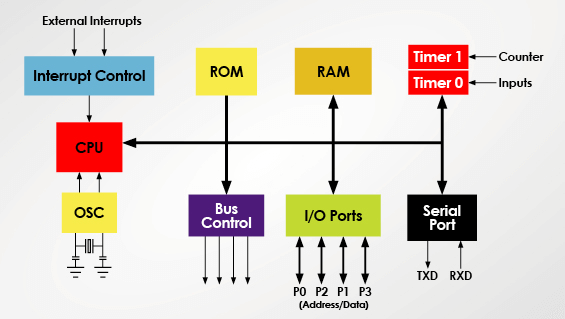 Other supporting elements of a microcontroller include

An analog-to-digital converter (ADC) is a circuit that converts analog signals to digital ones. It enables the microcontroller’s central CPU to communicate with external analog devices such as sensors.

The inverse function of an ADC is a DAC, which allows the microcontroller’s CPU to send its outgoing signals to external analog components.

The system bus is the connecting wire that connects all of the microcontroller’s components.

The serial port is an I/O connection that allows the microcontroller to connect to external components. It functions similarly to a USB or parallel port, but it communicates data differently.

Features of a Microcontroller

Microcontrollers, in general, are designed to be easily useable without the usage of extra computational components since they have enough onboard memory and pins for typical I/O activities, allowing them to communicate with sensors and other components directly.

While CISC is easier to develop and makes the better memory use, the more clock cycles required to execute instructions can degrade performance. Because of its simpler instruction set and thus greater design simplicity, RISC processors often deliver superior performance than CISC processors, which emphasize hardware. However, because of its emphasis on software, it might be more complex. Depending on the application, several ISCs are employed. Microcontrollers used assembly language exclusively when they initially became available.

The C programming language is a common choice nowadays. Python and JavaScript are two other popular microprocessor languages.

A microcontroller’s employment as a digital signal processor is a fairly specific application. Incoming analog signals frequently contain a certain amount of noise. In this sense, noise refers to confusing values that can be converted into normal digital values. The ADC and DAC on a microcontroller can convert an incoming noisy analog signal into an even exiting digital signal.

Airplanes, spaceships, ocean-going vessels, automobiles, medical and life-support systems, and robots require more sophisticated microcontrollers. Microcontrollers can control the functioning of an artificial heart, kidney, or other organs in medical applications. They can also play an important role in the operation of prosthetic devices.

As chip density and complexity have become more affordable to manufacture, the line between microcontrollers and microprocessors has blurred, and microcontrollers have thus integrated more “general computer” types of capability.

On the other hand, microcontrollers can be said to work well on their own with direct connections to sensors and actuators. In contrast, microprocessors are designed to maximize computing power on the chip, with internal bus connections (rather than direct I/O) to supporting hardware like RAM and serial ports. Microcontrollers are used in coffee makers, whereas microprocessors are used in desktop PCs.

Again, a thorough examination of the complete range and significance of distinctions between each of these three component kinds is way beyond the scope of this basic guide’s usefulness. The fundamental distinction comes in terms of their relative bus widths – or, in layman’s terms, the width of their separate ‘data pipes’ for a very simple picture.

Finally, this is the most important criterion determining the speed and mathematical precision. Put another way, and an 8-bit microcontroller will need more bus accesses and instructions to complete 16-bit or 32-bit computations. It will thus arrive at the ‘answer’ (i.e., output behavior) significantly more slowly than a 16- or 32-bit MCU.

In truth, a complete explanation of the distinctions between 8-, 16-, and 32-bit microcontrollers would necessitate a much longer explanation and a full vocabulary of words for non-programmers. In computer words, it’s the same kind of limitation you’d discover with a slow CPU rather than a ‘faster’ (more powerful) one, and this crucial criterion will influence the programming languages (such as C++, Python, R, Arduino, and so on) you may use with a certain microcontroller device.

For individuals looking at purchasing possibilities, it’s worth noting that 8-bit MCUs have long been considered the most basic and cost-effective options, although they have restricted capabilities in specific applications. 16-bit and 32-bit microcontrollers are often more expensive, providing better performance.

Choosing an MCU For Your Design

It’s critical to take considerable caution while selecting an MCU for your project. Choosing the wrong MCU can lead to a frustrating design process. When selecting an MCU, there are various aspects to consider.

Larger program memory is frequently required for more complicated devices. Apart from that, you’ll need to generate a list of the device’s peripherals and communication requirements. In some applications, internal functions like the ADC, power management module, and bootloader may be required.

The development tools might sometimes influence the MCU selection. You’ll want to employ user-friendly programming tools and IDEs (Integrated Development Environments). Of course, using an MCU with a pre-created component in the PCB design software and tools that you’re using is also beneficial. OrCAD PCB Designer has a large library of potential components to choose from, as well as a powerful and effective layout software that can handle any design issue.

Advantages of The Microcontroller

Disadvantages of The Microcontroller

A microprocessor powers the computer you’re using to read this page. The microprocessor is at the center of everything, whether it’s a desktop computer, a server, or a laptop. Microprocessors come in various shapes and sizes, but they all do roughly the same job in about the same way.

Everything You Should Know About Laser Modules?

Everything You Should Know About IGBT Module?

Everything You Should Know About SRAM IC?

Everything You Should Know About NVRAM IC?