Everything You Should Know About Multiplexing

Multiplexing is a way of transmitting and receiving information used by telecommunications such as radio, telephone, and television. Multiplexing is a technique for sending several analogs or digital signals over a single transmission line. Multiplexing is mixing data streams, and a multiplexer is hardware used for multiplexing. This article will answer the question, “What are multiplexing and the different types? Continue reading for the full answer. 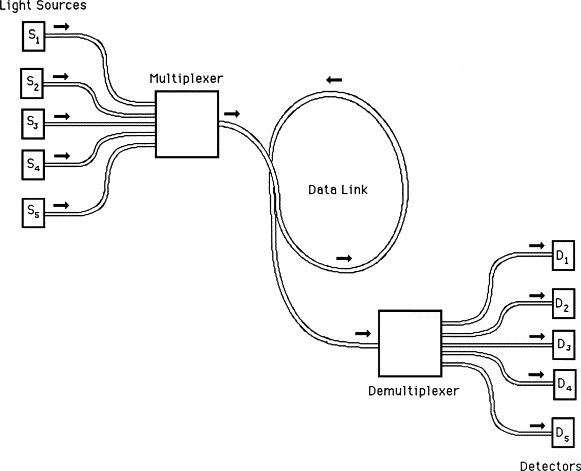 Multiplexing is a technology that allows several communication signals to be combined and transmitted simultaneously over a single communication line. Both analog and digital signals can benefit from multiplexing. Multiplexing, also known as muxing, can lower the hardware cost of expensive dedicated network communication segments like copper or fiber cables.

Telephony, data connections, and audio/video broadcasting are examples of multiplexing. Multiplexors are used in telephone service to combine many lines in a neighbourhood into a single signal, which is subsequently sent to the central switching office for call routing and control. Because of developments in VoIP technology, traditional phone lines are being phased out in favor of digital packet-based audio transmission.

Some data communication links, mainly leased lines and long-distance lines, are frequently built as multiplex connections to increase use while minimizing costs. Multiplexing is a technique used in many types of television transmission, particularly cable and satellite solutions, to send a single carrier channel to recipients or subscribers that simultaneously carry all of the available audio and visual tracks. The end-user then tunes a receiver to the correct signal to decipher the right channel’s transmission. A growing number of FM radio stations are experiencing the same problem. Many FM stations in big markets add sub-channels to their main broadcast to provide alternate or complementary news, chat, or entertainment.

It’s critical to understand the difference between packet switching and multiplexing systems. Communication is divided into parts or packets via packet switching. Each packet is then routed to its destination separately through shared or common network paths. The majority of network paths can only sustain one communication signal at a time. As a result, packets are sent in series rather than parallel. Multiple communication signals will be combined onto a single physical network media using a multiplex system, allowing for simultaneous or parallel transmission.

Multiple types of multiplexing are available to organizations. The types of signals being carried (analog vs digital) and the media used to carry those transmissions (coaxial cable, fibre optic cable, or microwave connection) will all influence their decisions.

Division of frequency Multiplexing is a technique for delivering signals via a media that employs several frequencies to combine multiple data streams. It assigns a frequency to each data stream before combining multiple modulated frequencies for transmission. The best example of FDM is television transmitters, which employ FDM to broadcast many channels simultaneously.

Signals are formed by sending different device-modulated carrier frequencies, merged into a single signal that can be transmitted over the network in this sort of multiplexing. Enough bandwidth separates the carrier frequencies to support the modulated signal, and these bandwidth ranges are the channels that different signals flow through. Unused bandwidth can divide these channels. Time-division multiplexing occurs in the transmission of radio and television signals.

Each input signal (or data stream) on a communication channel is assigned a fixed-length time slot in time-division multiplexing (TDM). During its assigned time slot, each sender sends a block of data.

Standard TDM has the disadvantage of reserving a time slot in each cycle for each sending device, regardless of whether it is ready to transmit. As a result, there may be unfilled slots, and the multiplexed communication channel may be underutilized.

STDM is a step forward from traditional TDM. If a sender in an STDM cycle is not ready to transmit, the next ready sender can. As a result, the number of unused slots is reduced, and the communication channel is better utilized. STDM data blocks are referred to as packets, and they must include header information to identify the receiving destination.

Long-distance telephone service via a T-1 wireline and the Global System for Mobile Communications (GSM) standard for cellular phones are two applications that employ TDM. For LAN and internet communications, STDM is utilized in packet-switching networks.

The sampling rate for each signal in asynchronous TDM is different, and the clock signal is not the same. Unlike synchronous, if the allotted device does nothing and is idle for a time slot, the slot is allotted to another device.

Signals from many senders are sent in an assigned frequency band using code division multiplexing (CDM). CDM employs the spread spectrum principle, in which transmitted signals are dispersed throughout all frequency channels in the allotted band.

In the simplest terms, each signal in a CDM system is multiplexed by a spreading code assigned to the sender. The bandwidth required for the signal is increased by using spreading code modulation. The receiver recognizes the spreading code, which uses it to de-multiplex the signal.

Orthogonal Frequency Division Multiplexing (OFDM) is a signal modulation technique with several advantages for data transmission. As a result, OFDM is primarily employed in cellular telephony, Wi-Fi, and other current wide bandwidth and wireless systems with large data rates.

OFDM employs many carriers, each of which stores low-bit-rate data, making it highly resistant to fading, incursion, and multipath effects while also providing great spectral efficiency.

In wired communication, the employment of distinct point-to-point electrical wires for each transmission channel is known as space-division multiplexing or SDMA. A multi-pair telephone cable, a switched star network such as a telephone access network, a switched Ethernet network, and a mesh network are examples of analog stereo audio cables containing one pair of wires for the left channel and another pair of wires for the right channel.

Polarization-division multiplexing (PDM) is a physical layer approach for multiplexing signals carried on electromagnetic waves that allows two channels of data to be delivered on the same carrier frequency utilizing waves with two orthogonal polarization states. It is used to double the bandwidth in microwave communications such as satellite television downlinks by using two orthogonally polarized feed antennas in satellite dishes. It’s also utilized in fibre optic communication, where independent left and right circularly polarized light beams are sent through the same optical fibre.

Multiplexing many channels of signals utilizing electromagnetic radiation across a single conduit using orbital angular momentum multiplexing is a relatively new and experimental approach. It can considerably increase the transmission capacity of such systems when combined with other physical multiplexing approaches. It is still in the early stages of development as of 2012, with small-scale laboratory demonstrations of bandwidths of up to 2.5 Tbit/s over a single light path. Many academics argue that this is not a novel kind of multiplexing but rather a special case of space-division multiplexing.

In many applications, a multiplexer is a device that permits numerous data streams to be transmitted over a single line.

A multiplexer is a device used in computer memory to maintain a large quantity of memory while reducing the number of copper lines required to connect the memory to other computer components.

In telephone networks, a multiplexer is used to mix various audio streams on a single transmission line.

Transmission from a Satellite’s Computer System

Using GSM communication, a Multiplexer is utilized to transport data signals from a satellite’s computer system to the ground system.

Why is Multiplexing Required?

The transmission medium’s primary duty is to carry signals from the transmitter to the receiver. The medium only includes one signal at a time in this case. If many signals must transmit a single media, they must be separated so that each signal receives a portion of the available bandwidth.

For example, if there are five signals and the medium bandwidth is 50 units, each signal can share the five units. There is a risk of a crash when many signals transmit to the same media. As a result, the principle of this strategy is mostly employed to avoid such collisions.

Multiplexing is the process of merging several signals into a single signal that may be transmitted over a single media, such as a telephone line. Analog or digital input signals are both acceptable. Multiplexing allows sending signals more efficiently via a communication channel, lowering transmission costs.

Multiplexing was first developed for telegraphy in the 1800s. Today, multiplexing is used in various telecommunications applications, including the telephone, internet communications, digital broadcasting, and wireless telephony.

This concludes our discussion of multiplexing in networking and its various kinds, such as analog and digital multiplexing. Analog signals are multiplexed based on their frequency or wavelength in analog type. These are divided into frequency division (FDM) and wavelength division (WDM). Digital data is stored in discrete bits. Because packets/frames are distinct, the accessible data is in this format. This technique has several types, including time division, synchronous, and asynchronous.

For more details on multiplexing, contact us at ICRFQ. We are the best electrical components manufacturer in China.