Everything You Should Know About Parallel Circuit

These circuits’ current can go in a multitude of directions. Because the current in a parallel circuit might travel different channels, it does not always follow the same path.

What is a Parallel Circuit?

The current flows over several separate routes in a parallel circuit. You’d have to travel along each branch of a parallel circuit if you wanted to pass through all components. If one component fails or is detached, the other branches feed voltage and current to the remaining components, keeping them operational.

Lighting circuits in our homes and offices are parallel circuits. In contrast to a series circuit, if one bulb fails, the other lights in the circuit continue to work and remain lighted. Also, the others will stay lit if you add more lights to the circuit because the current is shared.

Construction of a Parallel Circuit

A parallel circuit is made by connecting the terminals of all the individual load devices so that the voltage across all of them is the same.

In contrast to a series circuit, if anyone branch or component in a parallel circuit is opened, current still flows to the other devices in the circuit.

Let’s have a look at the parallel circuit, which is a unique type of circuit: 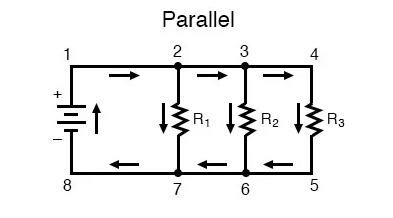 A parallel circuit is distinguished because its components are wired to the same set of electrically common terminals. Points 1, 2, 3, and 4 are all electrically linked, as seen in the schematic diagram. Points 8, 7, 6, and 5 are also in this group. Between these two sets of terminals, all resistors and batteries are connected. However, the complexity does not end there! Circuits with both series and parallel elements are also possible.

Parallel circuits are built up such that current can flow through multiple branches at once. Voltage, not current, remains constant throughout, and Ohm’s Law can be used to compute voltage and current. The circuit can be handled as both a series and a parallel circuit in series-parallel circuits.

A parallel electronic circuit is one in which the leads of two or more electronic components are connected to the corresponding leads of every other component in the circuit. Connecting a parallel circuit with two resistors is straightforward. Connect the first resistor’s left lead to the left lead of the second resistor first, then the first resistor’s right lead to the right lead of the second resistor.

Before connecting two resistors across the terminals of a power supply, they’re commonly linked in parallel. Identifying the total amount of current flowing from the supply is a common difficulty with such a system. According to Ohm’s rule, the current coming from the battery equals the voltage divided by the equivalent resistance of the two parallel resistors. If the battery voltage was 15 volts and the equivalent resistance was 1.5 Ohms, the current from the battery would be equal to 10 amperes because 15 divided by 1.5 = 10.

The currents that travel through each parallelly connected resistor are called branch currents. When current from a battery reaches the point (node) that unites the branches of a parallel resistor circuit, it splits between the resistor branches like water in a river. The total of the currents in the two branches will equal the overall current from the power source. The amount of current in each branch, on the other hand, will be determined by the resistance of the branch. Current will flow faster through a branch with a lower resistor value than through a branch with a higher resistor value.

The voltage drops across parallel components in a circuit are the same, as indicated earlier in measuring voltage. According to Kirchhoff’s voltage law, the sum of all voltages (the positive voltage from the power source plus the voltage drops from components) must equal zero in a closed loop.

In a parallel circuit with numerous branches, you can make a loop using any of the parallel branches and the batteries. Regardless of the component on each branch, the voltage drop across every branch must be equal to the voltage given by the battery (ignoring the possibility of other components in series, for simplicity). Because this is true for all branches, voltage losses between parallel components will always be the same.

The Use of a Parallel Circuit Connection

Light-emitting diodes (LEDs) and other electronic components that emit light when a voltage is applied are routinely stacked parallel and in series. When LEDs are connected parallelly, one LED will turn off while the others stay on. When one of the lights in a series LED configuration fails, the others fail. Series LED layouts to require less electrical current to run than parallel LED installations.

When many resistors are connected in series, the total resistance of the series resistors equals the sum of the resistor values. Because of this feature of resistors in series, you can build higher-value resistors by simply connecting them in series.

Same Voltage Across all Branches

Whether there are several or single power sources, the voltage across a parallel circuit remains constant. The voltage from the power sources is dispersed across the circuit, which causes this. You’ll need to manage the voltage via resistors or voltage regulators if your circuit requires multiple voltages at different points.

A parallel circuit splits the current from the power source across the circuit. Different amounts of current flow result from each branch’s resistances. Additionally, the current increases when you add branches to the circuit; you must verify that your power supply can manage the increased current; otherwise, the entire circuit would be power-starved. When a constant current is required, parallel circuits are not an option.

The voltage in a parallel circuit remains constant when branches are added, necessitating a change in current flow to compensate; when more resistors are added to further branches, the overall resistance of the circuit decreases, resulting in a lower resistance in the circuit. The only way to increase resistance is to add resistors in series with each other and on existing branches.

The parallel circuit is the most typical form of circuit you’ll encounter. In most power distribution systems, loads are connected in some manner or another in parallel.