Everything You Need To Know About Parts Of Transformer 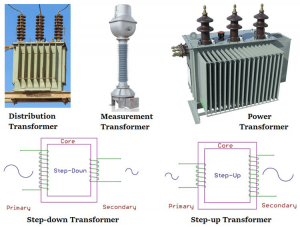 Do you have a transformer? If yes, chances are you only care about the output that you will get from it.

Have you ever bothered to know the mechanisms behind its operations?  Like knowing the parts and components that make up a transformer?

A transformer is an electrical device that transfers energy from one circuit to another by electromagnetic induction. Transformers are widely used in power transmission, electric power distribution, and electronics applications.

They are also used in industrial control and laboratory equipment where they are often referred to as “pigtails”.

You might have seen them before at a power plant, on your light switch at home or maybe you’ve seen the big ones on utility poles.

Well, we are not here to discuss the applications of transformers. Instead we are about to unravel the parts and components of a transformer.

How does a transformer work?

Before we dive deep into the parts, let’s see how a typical transformer works or simply state the basic principle of a transformer.

A typical transformer consists of two coils or windings of insulated wires around an iron core. The coils are usually wrapped around the same core. One winding is called the primary winding and the other one is called secondary winding.

The second winding, or secondary coil, is connected to the load that uses this changing magnetic flux for its own purpose, such as acting as a power supply for electrical equipment, heating elements, or lighting.

The changing magnetic flux induces a voltage in the secondary coil because of Faraday’s law of induction. This voltage causes current to flow through the load in one direction as if an electromotive force (EMF) were applied to it from an external generator.

Now let’s have a technical view of the whole transformer working mechanism.

Transformer operation depends on Faraday’s law of induction. The changing magnetic flux in the core creates an EMF between the primary and secondary coils due to Faraday’s law, which causes a current to flow through the secondary winding.

This principle (faraday) is used in power distribution systems and in power supplies for vacuum tube and transistor radios where the energy is supplied by a high voltage alternating current mains supply; these are called “power” transformers.  The output voltage is much lower than the supply voltage, typically a few hundred volts for mains power.

Components of a transformer

Now that you understand the working mechanism of a transformer, let’s have a breakdown of the main components that make up a transformer.

This is always considered as the heart of a transformer. It’s primary role is to provide an attachment surface for the windings.

The core of a transformer is made up of many thin steel sheets that are laminated together to form a three-dimensional structure.

The core must be made up of a magnetically permeable material so that the magnetic flux can pass through the core. The core material is often made out of high-permeability silicon steel laminations, which are stacked and bonded together.

What is the first thing that comes into your mind when you see the name winding? Probably you would think of wires coiling around an object.

You are right. In this case, the windings are coiled around a core!

The transformer’s windings are made up of a number of coils, wound around the core. The number of windings and their size depend on the application and type of transformer.

But arent the windings affected by electric short circuit or some sort of magnetic loss? You may wonder. Your concerns are true and the good news is there are mechanisms designed to prevent such flaws.The windings are insulated from each other by varnish, plastic, or paper to prevent them from short-circuiting.

The windings are then connected to an electrical circuit that provides an alternating current (AC).

You should also keep in mind that a typical transformer has two sets of windings: primary winding and secondary winding. How these two windings are arranged matter and it will affect the output that you get from the transformer.

The ratio between the number of turns in the primary winding and that in the secondary winding is called the turns ratio.

So, next time you are buying a transformer, it will be prudent to inquire about the turn ratio. Ensure that the ratio will make the transformer relevant to your application area.

As we have already stated, the primary and secondary windings need to be insulated. And this is where the relevance of the insulating materials come in. They serve to prevent the flow of current between the primary and secondary sides of the transformer. In other words, they provide isolation between the two sides. The insulating materials also insulate the core of the transformer from the electric loss.

Ceramics and plastics are just some of the insulating materials that are used on most transformers. However, it is important to note that they are not equally effective.

For instance, plastic is the most common material used on small transformers. This is because it is relatively cheap and easy to install. However, its insulating ability is not as good as ceramics or other materials.

However, when you are looking for a transformer for high voltage applications , you will have to consider using ceramics or other more expensive materials. The same goes for large transformers used in power networks; they typically use ceramic materials.

It should be noted that the insulating ability of a material depends on a number of factors such as its thickness and quality. But then again, if you are looking at the price tag, plastics are almost always cheaper than ceramics or similar materials. This could also imply that the price of the transformer may be determined by the type of insulating material that has been used.

Well, this is another component  that you are likely to find on most transformers. The transformer oil is used to insulate the transformer core from the surrounding atmosphere. It is also used to cool the core and protect it from moisture and dust.

There is no universal oil used in transformers. This is why you may be warned of using specific oils.The type of oil that has been used on a transformer may be determined by a number of factors such as the manufacturer, quality, and cost. The same goes for its consistency; it could either be in liquid or solid form depending on what was used during its manufacturing process.

As we have mentioned, oil is one of the key transformer components. So, where is this oil stored? You may wonder.

A transformer tank is the container that usually holds the transformer oil. The tank can be made of steel or plastic, depending on the price and type of transformer.

The material used for a tank also depends on its purpose as it has to withstand heat, moisture, and other factors.

Other than acting as a storage container for oil,  the tank also plays a protective role. It is designed to protect the core from the external vagaries of nature.

How does a conservator help to conserve oil? Well, it achieves this using the principle of expansion and contraction due to heat.

The oil in the conservator expands and contracts due to heat. As a result, the oil is absorbed into the tank.

At this point you must be aware of the immense heat generated by transformers. Various mechanisms are designed to deal with heat management. One of them is the use of cooling tubes.These are also called refrigeration tubes.

Air circulation is an important factor in the working of a transformer. One way in which it is managed is with the help of breathers. A breather is a device which is used to remove the contaminants from the air. It is usually fitted at the top of a transformer.

Moisture is just one of the continents that are prevented from getting into the tank. Since  a breather is made of silica gel, it will absorb or filter out the water content from the air.

This ensures that air getting into the tank is moisture-free.

Other chemicals may be added to the breather to further facilitate the purity of air getting into the tank.

We are back on the heat issue. radiators and cooling fans are among the components that are tasked with heat management of a transformer.

The heat radiation from the transformer core is dissipated by cooling fans and radiators. It is important to ensure that the air flow in a transformer is not obstructed.

The air flow in a transformer should also be evenly distributed. This can be achieved by installing fans and radiators at various locations.

A fan is usually fitted on top of the tank. It draws in fresh coolant through the top opening and exhausts it through the bottom hole.

Another type of fan is used to draw coolant from below the tank, and then exhaust it out of the top hole.

This type of fan may also be fitted at both ends of a transformer tank to provide more uniform air flow distribution across its length.

A radiator is placed on all sides of a transformer, except for its ends, so that all sides get equal amounts of heat radiation from it.  All these systems protect the transformer from overheating. 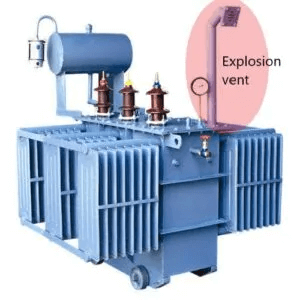 Transformers can explode over a course of time. There are mechanisms designed to prevent such incidents. One of them is the use of an explosion vent.

An explosion vent is a safety device installed at the end of a transformer.

It is designed to prevent the explosion of the transformer in case of an accident. An explosion vent is fitted with a safety valve and also includes an emergency switch that switches off the electricity supply if there is an emergency.

Those are the major components that make up a transformer. Of course there could be some modifications  on different transformers depending on their application areas.

In case you would like to buy any of the above transformer components, let us help you. At ICRFQ, we are an electrical component supplier in China