Everything You Need to About Passive Components

The passage of electrical current through electronic circuits powers and controls the electronic devices we see all around us. Each circuit is a collection of electrical components that work together to accomplish a specific task. According to the job(s) the system must complete, circuits can be designed to perform a wide range of operations, from simple actions to complicated jobs.

What is a passive component?

What exactly are Passive Devices? Energy is not generated by passive devices or components, although they can be stored or dissipated. Passive devices, such as resistors, inductors, capacitors, and transformers, are essential components in any electrical or electronic circuit.’

As their name implies, passive components are electrical components that do not require any electrical power to operate, as opposed to “active devices” such as transistors, operational amplifiers, and integrated circuits, which must be powered in some way to function.

By their nature, passive devices do not contribute gain, amplification, or directionality to a circuit but rather an attenuation, as their gain is always less than one unity. As a result, passive devices cannot generate, oscillate, or amplify an electrical signal.

Passive devices can be employed individually or in series or parallel inside a circuit to control complicated circuits or signals, induce a phase shift in the signal, or provide feedback. Still, they cannot multiply a signal by more than one due to their lack of power gain. 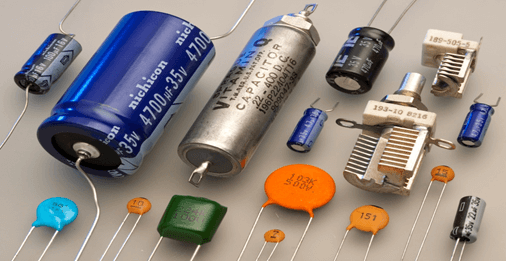 Capacitors are electrical components that passively store electric energy. The condenser was the name given to them in the past. An insulator separates the electrical conductors in a capacitor. A dielectric is a type of insulating layer.

Although all capacitors have the same essential components, the material used and the configuration can differ significantly. They’re often used in electrical circuits. Allowing only AC and blocking DC are two instances, smoothing a power supply output.

What does a capacitor do?

An electrostatic field formed by a potential difference across the conductors can store energy in a capacitor. When a conductor is exposed to a voltage, one of the capacitor’s plates collects a positive charge while the other is negatively charged. The capacitance in farads is the ratio of this electric charge to the potential difference (voltage). This is the most critical parameter to consider when describing a capacitor.

When the distance between the conductors is small, and the surface of the conductors is large, the capacitance is the highest. Although ideal capacitors are described entirely in terms of capacitance, there are several restrictions in the real world. The conductors and lead wires, for example, create parasitic inductance and resistance. The maximal strength of a static electric field has a limit, which is defined by the breakdown voltage. The leakage current is the current that leaks through the dielectric.

Types of capacitors and their applications

Capacitors come in various shapes and sizes and are used for various applications and functions. The most popular types of capacitors used in electronic circuits are listed below.

Some options are polyester film, metalized film, polypropylene film, PTE film, and polystyrene film capacitors. The dielectric material utilized to separate them is what sets them apart. Based on its qualities, the dielectric should be chosen with care. Film capacitors have various advantages, including excellent reliability and long life. In high-temperature situations, they are preferred. 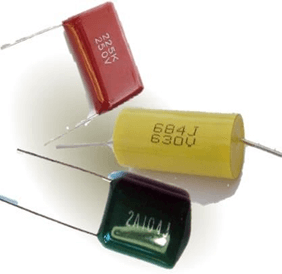 Film-based capacitors are utilized in various automobile electrical devices because they are stable in high-temperature and vibrating situations. Film capacitors’ wide range of applications can also be due to their high voltage handling capabilities.

These capacitors have a set capacitance and no polarity. As a dielectric material, they use a ceramic substance. The two most prevalent ceramic capacitors are the multi-layer (MLCC) and the ceramic disc capacitor. 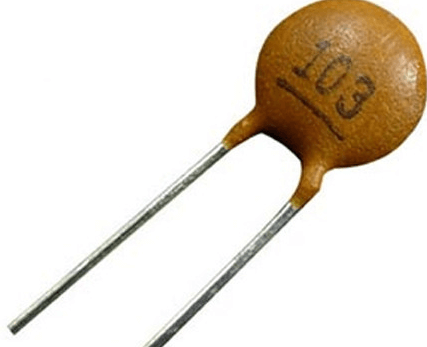 It’s worth noting that ceramic materials are poor conductors of electricity, preventing electric charges from flowing through them. The disadvantage of ceramic capacitors is that their capacitance fluctuates when the temperature changes.

Ceramic capacitors are ideal for high-frequency applications due to their low inductance. They are compact and can be found in a variety of electronic devices, such as televisions, mobile phones, digital camcorders, laptops, and so on. 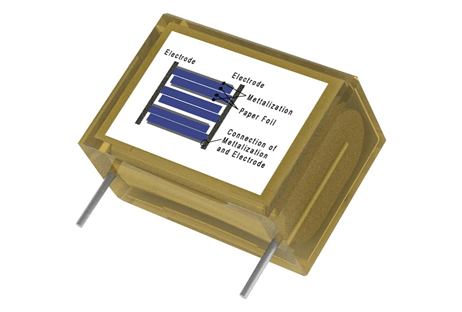 These are made with paper as the dielectric and may store a significant electric charge. These have a capacitance range of 0.001 to 2.000 microfarads and a voltage range of up to 2000V. This capacitor absorbs moisture from the air, lowering the dielectric’s insulating resistance. In filtering applications, paper capacitors are utilized. They can also be used for high-voltage and high-current applications. 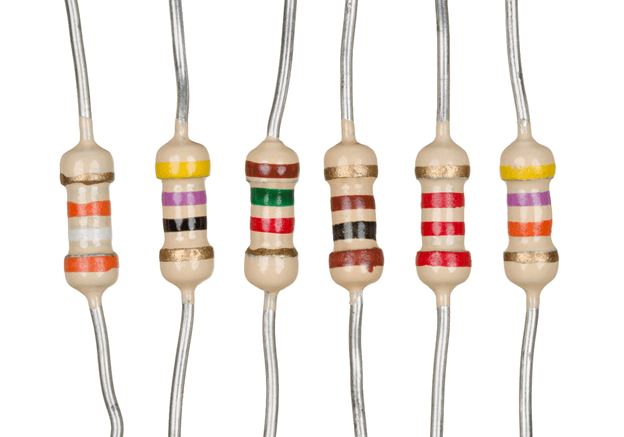 High-power resistors can be employed in motor controllers, power distribution systems, or as generator test loads because they can dissipate several watts of electrical power as heat. Fixed resistance resistors have resistances that do not fluctuate much with temperature, time, or operating voltage. Variable resistors can be used to alter circuit elements (such as volume control or a lamp dimmer) or as heat, light, humidity, force, or chemical activity sensing devices.

The parasitic capacitance and inductance of high-frequency circuits, such as radio electronics can cause undesirable effects. Wire wound resistors have the highest parasitic reactance, while foil resistors have the lowest. The electric noise of the resistor must be as minimal as feasible for accurate applications such as audio amplifiers. For a 1 MHz bandwidth, this is generally expressed as microvolts noise per volt of applied power. The power rating is critical for high-power applications.

The maximum operational power that the component can handle without affecting its qualities or causing harm is specified here. The power rating is given in free air at ambient temperature in most cases. Higher power ratings necessitate a larger size, and heat sinks may be required. A variety of different parameters can influence the design specification. The maximum voltage or the pulse stability are two examples. This is a critical feature in situations where significant voltage surges may occur.

In some cases, the designer must consider the electrical quantities and the mechanical robustness in severe settings. Military standards can help determine mechanical strength or failure rate in particular cases.

What Do Resistors Do in a Circuit?

When two or more resistors are connected in series, the voltage at their junction point is proportional to their values. This feature is commonly utilized to generate intermediate voltages in circuits.

Transistors and many other devices must have their AC and DC operating characteristics and gain levels specified for proper operation. This is known as biasing and is done with multiple resistors.

Most op-amp circuits’ gain and feedback functionality must be set by resistors external to the amplifier chip; resistors are the most common way to do this.

Resistors are used to control how much current passes through a circuit part. Many circuits benefit from this safety feature, limiting the amount of current into an LED to control its brightness.

The receive and transmit ends of a circuit must have the same impedance to maximize power transmission at high frequencies. At least a portion of this requirement can be met using resistors.

Many circuits need to know how much current is flowing, but measuring voltage is much easier, so using a resistor to ‘generate’ a voltage – recall Ohm’s law – is a common way for measuring current.

This feature aids in the reduction of noise on high-speed computer buses. When a data bus tri-states or is driven high, it’s common to need to draw it into a known state or ensure that its output high is much above the switching point of other logic elements on the bus, which a pull-up aids in.

What is an inductor

An inductor, often known as a coil, reactor, or choke, is a device that conducts electricity. A two-terminal component stores energy in a magnetic field when current flows through it. The inductor will oppose any variations in current via it when the voltage ratio (to current) varies.

Inductors can be made to work in a variety of industries and applications.

Differential mode inductors are utilized when a current cannot be canceled by an opposing current (as is the case with most common mode inductors). Other core shapes can better meet the mechanical requirements, but toroidal inductors are ideal for minimum volume and weight high-performance applications.

Inductors can be developed and tailored to match your exact demands, no matter how specific your application is. 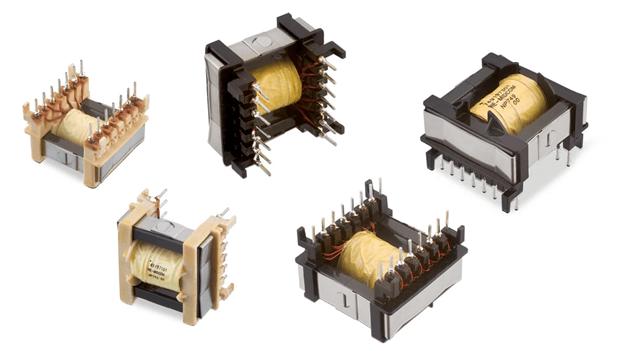 What are passive components used for

Passive devices or components do not generate energy, but they can be stored or dissipated. Resistors, inductors, capacitors, and transformers are examples of passive devices used in electronics and are required to make any electrical or electronic circuit.

Difference Between Active and Passive Components

A passive element, as a reminder, is an electrical component that dissipates, stores, and releases energy rather than generating it. Resistances, capacitors, and coils are passive elements (also called inductors). These components are called Rs, Cs, and Ls in the circuit schematics. Active elements, such as amplifiers and digital logic chips, are connected to most circuits.