PLC vs DCS: What’s the difference? 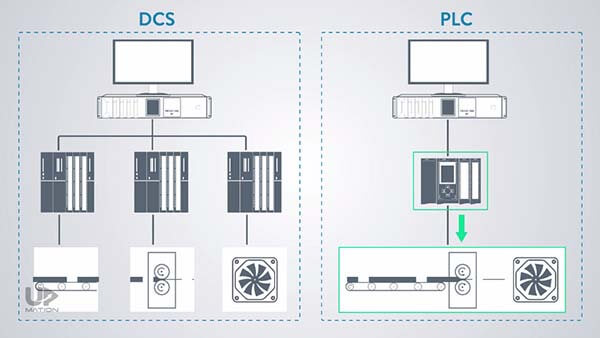 In the world of machines and electronics, there are tons of acronyms that can be very confusing. One of the most common ones is PLC (Programmable Logic Controller) and DCS (Distributed Control System). They’re often used interchangeably, but they’re actually very different. So what’s the difference?

Well, the differences go beyond the definitions. In this article, we are going to discuss key things that differentiate PLC from DCS.

What is a Programmable Logic Controller?

A PLC is a computerized device for controlling industrial machines, such as pumps, motors, and valves. It can be programmed by either an external device or by a built-in programming language. It runs on a microprocessor and has memory to store programs and settings.

Keep in mind that PLC are programmed based on the applications where they are intended to be used. There is no universal program for all the PLCs. OF course a PLC also features a user interface that allows you to execute all the required instructions when it is in operation. 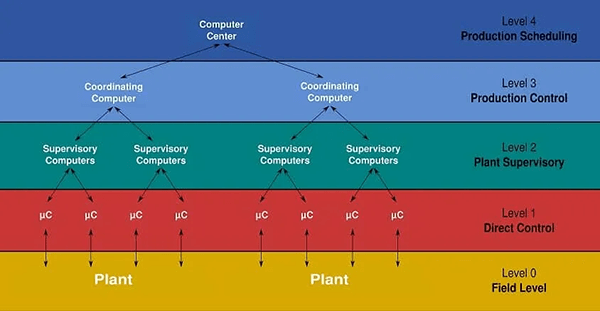 A Distributed Control System( DCS) is a control system that uses a computer network to connect multiple workstations. The distributed control systems are made up of a central computer and several remote terminals or local computers.

The main purpose of DCS is to provide complete and accurate information regarding the operation of the entire facility. It is also used to monitor, control and record various process variables.

DCS are highly scalable, a feature that allows them to add more computers to the network. The ability to bring together several nodes also allows them to be used for complex applications.

A typical distributed control system comprises several controllers, IO modules, operator stations, engineering stations, communication system among others. The type of application will dictate the components that will be in the DCS.

Also, DCS are designed based on their application areas. The design and components can be customized to meet your specific application needs.

Differences between PLC and DCS

Beyond the definition, let’s now look at the key points that set apart PLC and DCS.

What is the response speed of a controller? This is the time taken for the controller to respond to the commands. So, which one is faster between PLC vs DCS?

PLCs have a faster response time than the DCSs.

PLC can respond within a tenth of a second while the DCS can take up to 20 minutes to respond to a change or a command.

Keep in mind that this difference in response time is not always the same. The time will depend on the application area of the control system and even the design or construction of the controller.

Logic development refers to the process of building a system that will solve a particular problem or be used for a specific purpose. PLCs are built according to a specific application. You won’t just go and buy a random PLC system and configure it into your application area. Chances are it won’t work for your system.

DCS has a different approach to logical development. These systems have in-built control functions.

The only thing that you will need to do is configure the system according to your application. No programming or having to crack the underlying control parameters. Configuration is an easy task that requires less technical skills and levels of expertise.

Here we are referring to the number of input and output devices that the control systems can handle at a given time. The more IO devices you can handle, the more automation you will get. This is especially important in a plant where you want to automate every possible process.

A DCS can handle up to thousands of IO devices at a time while the PLC can handle up to one hundred systems. If you have many devices, you may consider going the DCS route for the purpose of performance and efficiency.

By architecture, we are referring to the components that make up a control system and how they are arranged. In a DCS, the components are arranged in a way that they can be easily interconnected. This is why DCSs are called modular. PLCs do not have this capability because they are designed to work in a linear fashion.

How long will it take to introduce a system or reconfigure the functionality of a control system? The simplicity of a PLC architecture supports maximum flexibility. You can easily introduce new IO components to the system and eject the ones that seem not to be performing per your expectations. The few components under PLC also support maximum flexibility.

What about DCS? Well, they are not as flexible as their PLC counterparts. It may be difficult to introduce random changes to the system. The complexity of the system does not allow frequent flexibility.

A DCS is more expensive than a PLC. In most cases, a DCS will cost you about five times as much as the PLC counterpart. However, there are many situations where a DCS may be more expensive to implement than the PLC version.

Of course you will fork more for the price of the DCS than for the PLC price. Even if you choose to import these control systems in China. The cost of integration, configuration and maintenance of the two systems will also differ. Again, DCS will attract a higher maintenance cost.

DCSs have higher system resources in comparison to their PLC counterparts. This is mainly because of the fact that DCSs are built for more complex and sophisticated applications and hence require more advanced hardware components to support these applications.

A PLC is designed for simple control systems that require low-end hardware components such as relays and sensors to function.

PLC and DCS also differ in terms of their application areas. PLCs are designed to provide the most basic control applications, such as power and process control. They are perfectly suited for the applications that require minimal changes once the implementation has been done.

DCSs are designed to be more redundant than PLCs. This is because DCSs can use multiple sensors, multiple controllers and can even use other DCSs on the same line. In comparison, a PLC has only one controller and only one sensor while it relies on a single communication channel to communicate with the outside world.

What is the difference between HMI and DCS?

Away from the above talking points, most people tend to confuse HMI and DCS. What is the difference? HMI stands for Human Machine Interface and is the interface between the user and the machine. It is more of a graphical interface that can be used by a human to control the machine.

A DCS is based on a software called PLC. The difference between HMI and DCS is that HMI is an interface for humans to use while DCS is an interface that is used by machines.

When we talk about control systems such as PLC and DCS, it will be difficult to ignore SCADA. SCADA stands for Supervisory Control and Data Acquisition. It is a type of control system that is used to monitor the operation of a machine or process.

It can be used to monitor the status of a machine and make sure that it is operating as intended.

What should I look for when buying PLC and DCS?

When buying PLC and DCS, it is important to consider the following:

-The features of the control system

-The reliability of the control system

-The price of the control system

-User interface of the system

-Usability of the system

-Scalability of the control system

-Complexity of the system

One last thing that you should consider is the brand. Who is the manufacturer of your PLC or DCS that you want to buy? Choosing a reputable supplier or manufacturer will guarantee you a quality control system It is for this reason that we at ICRFQ strive to deliver the best PLC and ICRFQ for sale. We are a reputable electrical component sourcing agent in China.