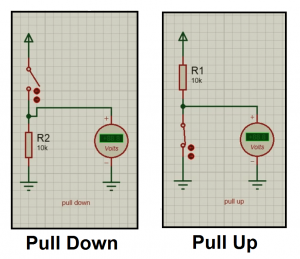 Any digital electrical circuit will mostly contain pull-up & pull-down resistors if you look it over. When there is no input condition, they are employed to properly bias digital gates’ inputs to prevent them from floating around arbitrarily. Pull-up and pull-down resistors use input and output signals for any microcontroller in an embedded system like an Arduino to communicate with external hardware devices and the General-Purpose Input Output (GPIO). You may reach either “high” or “low” states in the circuit by incorporating the pull-up & pull-down resistors. If you don’t implement it, your software will read a “floating” impedance state and leave your GPIO pins unconnected.

The inclusion of a pull-up resistor creates a second loop over the crucial parts while ensuring that the voltage is well-defined even while the switch is open. It is employed to guarantee that a wire is pulled to a high logical level in the absence of an input signal. It is not a unique variety of resistors.

Without a driving signal, they function as straightforward fixed-value resistors connected between the voltage supply and the proper pin to determine the input or output voltage. Whenever the switch is activated, the gate input voltage is drawn up to the input voltage level. The gate’s input voltage is immediately grounded when the switch is closed. You must apply a pull-up resistor when you want to draw the signal to the “high” position and have a low default impedance condition. 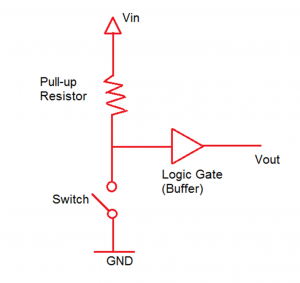 The voltage supply and a specific pin of the digital logic circuit were connected in the diagram above using a pull-up resistor with a fixed value. When the switch is open, the pull-up resistor and switch work together to adjust the voltage between the ground and VCC actively. The state of the circuit won’t be impacted at the same time.

A short circuit will occur if a pull-up resistor is not used. Shorting the pin directly to either ground or VCC will eventually cause circuit damage. According to Ohm’s law, if there is a pull-up resistance, a tiny amount of current will pass from the source to the resistors and the switch before reaching the ground.

Pull-down resistors come in handy when turning circuits on and off. For instance, a push-button and a pull-down resistor can be used to turn the course on and off. It will make it possible for current to pass through it under specific pressure or for certain buttons to be pressed.

Several components are turned on at once when a switch is flipped on. As a result, a current will simultaneously flow across all of these parts. A positive voltage gradually develops across each of them. Due to its restriction on current flow, the resistor prevents this.

Pull-down resistors cannot be used with numerous buttons. Because the current won’t pass through them, they won’t be able to perform their intended purpose. A pull-down resistor can be used to restrict current from flowing through a switch that is turned off for extended periods. It entirely shuts down as a result of it.

Methods for Determining the Actual Values of Pull-Down Resistors

This calculation can be changed depending on whether the resistor is positioned in front of or behind the load device.

Through the resistor, there will be a significant quantity of electricity flowing. The voltage drops across it could therefore be rather substantial. As a result, we must carefully select this number to avoid causing harm to the circuit or any of its components.

It is also possible to combine the pull-up & pull-down resistors into a single unit that simultaneously accomplishes both functions. Bidirectional resistors are what we call them. As a result, depending on how we use them, they can perform both roles since they permit current to flow through them in either direction.

The distinction is that a resistor will experience a voltage drop when a current pass through it. Pull-up resistors assist in “pulling up” the input signal’s voltage to the required level. This enables us to operate the circuit with less energy. Pull-down resistors, however, are useful for lowering voltages. They won’t harm linked devices or cause them to operate incorrectly because they are not excessively high.

When utilizing pull-down resistors, we must be aware that a significant voltage drop across it due to a high input current may harm some devices or even push them above their design limitations. It is usually recommended to utilize a pull-up resistor for circuit demands when an input voltage is higher than 5 V because these won’t harm the device. When employing voltages over this, issues develop, which we address by using series-connected resistors.

Then-current is only temporarily passed when pull-down resistors and transistors are used to control the state of logic circuits. So, unlike other resistors, the current won’t flow as long. Therefore, this must be considered when calculating how much electricity to consume. Their non-damaging nature is their key benefit over pull-up resistors alone. Additionally, they don’t need safeguards against overheating or excessive voltage increases.

The pull-up resistor’s output ranges from 0.8 to 2 volts. The pull-down circuit’s high input level exceeds its low output level by a factor of 1.5. Finally, 3 V to 15 V is the high output level. However, it is limited to 30V. Therefore, for a pull-down resistor with a 50-ohm input impedance, the threshold level of pull-down signal current is 0.5A.

In addition to being utilized as discrete components, we combine pull-up & pull-down resistors with building bidirectional circuits. These circuits function by allowing an input current to pass through the resistor due to a biasing mechanism. Whether or not it outputs the voltage will depend on whether this is above or below a specific level.

For instance, they come in handy in various logic gates, such as the half adder, which uses logic 1 to allow current flow through the transistor. As a result, the resistor experiences a voltage drop, which activates the circuit’s power source. The use of tri-state buffers is another illustration. Pull-up resistors are present on only one of the buffer sides, leaving the other side without any. As a result, there won’t be any power loss, and the current will only flow to the load when logic 0 is present. This circuit is utilized during data transmission between devices to prevent data loss by holding off on applying power until it is required.

Utilizing pull-up and pull-down resistors has several drawbacks, but their inefficiency is their principal drawback. It will therefore produce heat instead of work by converting some energy. They may also experience significant voltage drops if you do not take the proper measures, damage, or improper operation of connected equipment.

We may construct a modified version of this circuit without requiring extra parts. It gives the gadget an interface with an input voltage already there.

What Parts of A Computer Are This Compatible With?

Pull-up and pull-down resistors have the benefit of requiring the least power to operate all the methods. It qualifies them for low-power designs. They also don’t need extra buffers or other components to function together because they can produce their voltage. Diodes and transistors are just a few solutions that can be used when low power is required. Even so, they might not offer a resistor’s level of efficiency. It would decrease the overall effectiveness of a circuit created using this technique.

However, since these circuits might be the most suitable for some applications, there might not be a choice. It would therefore be best if you took into account their overall cost-effectiveness.