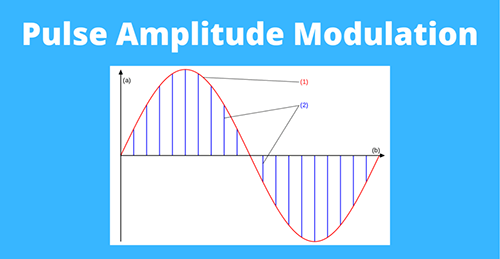 Pulse amplitude modulation (PAM) is a modulation technique used in digital signal processing. PAM involves the use of two separate signals: a carrier signal and a modulating signal. The carrier signal is the steady, unvarying element of the pair that remains constant at all times. The modulating signal acts as the dynamic element of the pair, changing its amplitude with each new input.

Pulse amplitude modulation is a very basic type of pulse modulation. This is because here, each signal is sampled at regular intervals. Also, the amplitude of each sample is proportional to the modulating signal.

For example, imagine you want to send a message to another person by way of Morse code. You would begin by speaking clearly and loudly so that your friend could hear what you were saying clearly.

In this case, your voice represents the “carrier” signal; it doesn’t change over time but remains constant throughout your speech—unlike the rapid up-and-down fluctuations of your speech that make up the “modulating” part of this example.

Before we get deeper into pulse amplitude modulation, let’s first understand the basics of modulation. This is a process of changing the characteristics of a carrier signal. It can be amplitude frequency and height among many others.

We can define a carrier signal as a steady waveform that has a well-defined frequency and amplitude. When the modulation is introduced to this signal, you will witness a change in the behavior and features of the waveform.

How is the Pulse Amplitude Modulation signal generated?

Pulse amplitude modulation is the process by which a waveform is produced by changing the amplitude of a carrier wave. This process is referred to as Pulse-Amplitude Modulation (PAM).

The DCT then calculates the discrete cosine transform of each frame and generates two new frames—one with zero mean and one with maximum mean.

The two new frames are then combined together to form a single new frame. This process repeats itself multiple times until the entire input data stream has been transformed into a single pulse amplitude modulated signal with constant amplitude.

There are two major classes of PAM. These are;

What is the difference between the two?

In this type of PAM, the amplitude of the carrier wave will vary between zero and maximal amplitude. This is made possible by using a variable carrier waveform.

Flat Top PAM has more advantages than Natural PAM as it can be used over a wider range of frequencies and in higher data rates. Flat top modulations have been used to transmit data since the 1960s, mainly for television transmission systems, where they are known as FM or frequency modulation (FM).

They are also useful for wireless microphones, such as those found in video surveillance systems that record audio signals onto an audio track on audiotape or other media.

In terms of the operation modes, pulse amplitude modulation is further classified into two categories. These are Single Polarity PAM and Double Polarity PAM.

Single polarity PAM is also known as unipolar or unidirectional modulation. In this case, an ideal DC bias is introduced to the signal to ensure that all the pulses remain positive despite the behavior of the waveform.

On the other hand, double polarity PAM is where the pulses have both positive and negative attributes.

So, which one is better between the two?

Single polarity PAM is more efficient in terms of bandwidth utilization. The reason is, the bandwidth of the modulation signal is less than that of the carrier wave.

Double polarity PAM is useful in cases where the user needs to modulate a carrier wave at a higher frequency than that of the data signal. This can be achieved by using a lower value for f in comparison to the data rate.

A drawback, however, is that it takes more time for the pulse-shaping circuitry to generate pulses at a high speed and thus requires more time to modulate a higher frequency carrier wave on top of a lower data rate signal. 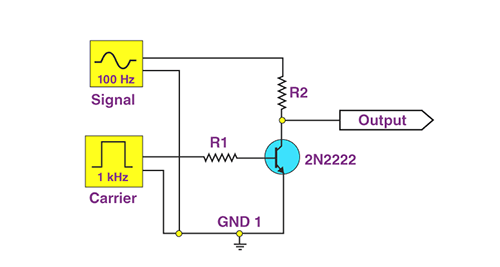 A Pulse Amplitude Modulation is a result of a combination of both the pure sine wave modulating signal and a square wave generator which is designed to generate the carrier pulse for the modulation purpose.

The duty cycle of this pulse train will determine how much amplitude will be added to or subtracted from the sine wave input signal. This amplitude control can be adjusted using a potentiometer. When this potentiometer is adjusted in such a way, it will produce two different outputs; one for positive values and another for negative values.

In positive values, this potentiometer has maximum resistance which means that there is zero change in amplitude when you adjust it all the way down (negative value).

As you move this potentiometer towards minimum resistance, it produces maximum amplitude which means that there will be a maximum change in amplitude when you adjust it all the way up (positive value).

Demodulation refers to the process of removing the modulation from the input signal. In this project, demodulation is achieved by subtracting the square pulse from the sine wave.

The first differential amplifier can be constructed using a single op-amp and a pair of resistors, R1 & R2.

Pulse amplitude modulation has a wide range of applications in the modern world. Let’s look at some of them:

Versions of ethernet connections such as 10BASE-T and 100BASE-TX use PAM to achieve high data transfer rates. The modulation is achieved by modulating the signal’s amplitude.

Photo biology refers to the field of biology which uses light to control various biological processes. PAM is used in this field to create ultrashort pulses of light. This has led to the development of various technologies in the field such as ultrafast laser, optical tweezers, and optical quantum computing.

Instrumentation amplifiers are used to amplify signals from low-level inputs such as sensors or switches. This is achieved by using a switch (called a pulse generator) that produces a square wave signal with a fixed amplitude and frequency. The exact duration of this square wave signal is controlled by the time constant of an RC circuit which makes it possible to generate pulses with different durations.

Pulse amplitude modulation is used in telecommunication equipment such as cable modems and DSL modems where data transmission rates are limited by the maximum length of the data carrier waveform that can be sent over the communication line without losing significant amounts of information.

Most digital television use PAM for the broadcasting and transmission of data. Here, the data is encoded using a digital signal. The PAM signal is then modulated onto the carrier waveform to produce the television picture. 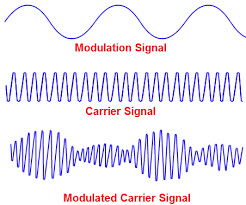 Here are the top advantages of pulse amplitude modulation:

-Provide an easier option for both modulation and demodulation: This is because the digital signal can be demodulated using a simple passive circuit, which can be easily integrated into the existing analog receiver.

-Quick transmission of data: The PAM signal can be modulated onto a carrier waveform at a high data rate. This allows the transmitter to send large amounts of data very quickly.

-PAM has excellent immunity to electromagnetic interference (EMI): The PAM signal has extremely good immunity to EMI. This is because the PAM signal is only transmitted at low power levels and because it uses a very narrow bandwidth.

The main demerits of pulse amplitude modulation include;

At this point, you have adequate information about pulse impulse modulation, how it works, and when it is used. Are you ready to implement it in your circuit or application? Go ahead and use it.

Ensure that all other components in the circuit are of the right quality.

One way of guaranteeing this is by buying from reliable electronic component manufacturers and suppliers. You can find them easily by using the services of reputable sourcing agents.

Check out the video below for more: