The most popular field-effect transistor is a metal-oxide-semiconductor field-effect transistor or a MOSFET (pronounced maws-feht) (FET). They function as electrical switches and amplifiers, with the former controlling the amount of electricity that can flow between the source and drain terminals. At the same time, the latter is dependent on the voltage applied to the gate terminal.

Most discrete transistors, thin-film transistor (TFT) LCDs  and IC use MOSFET as their underlying technology. They form the backbone of today’s electronics and are often regarded as the object that has been created the most throughout human existence.

Four terminals make up a MOSFET. These are the source terminal, the drain terminal, the gate terminal, and the base terminal. The base is typically connected to the source terminal in most cases. The semiconductors that make up the substrate, the source, and the drain can be either positively or negatively doped. A layer of insulating oxide lies between these components and the conductive silicon gate terminal. The semiconductor’s electrical properties are altered when a voltage is applied to the gate. This can either enable or disable the passage of electricity between the source and the drain of the device.

MOSFETs are the most widely used form of the transistor due to several advantages that are inherent to the device. They feature lower power consumption and higher switching speeds than other types of transistors. Because of their ease of miniaturization and ability to be packed into high densities, they are ideal for use in integrated circuits. In addition to this, their production and processing can be described as being relatively straightforward.

What Are MOSFETS Used In?

Today’s most popular type of transistor is called a MOSFET. The amount of voltage supplied to the gate terminal determines its fundamental function, which is to control the conductivity, or the quantity of electricity that can flow, between the source and drain terminals of the device. This digital logic component can act as a switch to turn on and off another circuit or transistors. They also can operate as signal amplifiers and can be utilized to adjust the amount of conductivity that is present in analog circuits.

In electronic circuits, high currents or power can be controlled with the assistance of power MOSFETs. Discrete components are often single transistors that have been packed together. These can be found in a variety of switching power supplies as well as motor controllers.

MOSFET ICs are the result of combining several MOSFETs onto a single chip. In today’s central processing units (CPUs) and graphics processing units (GPUs), the number of individual transistors can vary anywhere from a few to a few billion. This provides the foundation upon which Moore’s law is built. Modern high-performance MOSFETs have shrunk to just a few nanometers, and shortly, manufacturing processes will bring them down to just a few angstroms. Contemporary integrated circuits use a complementary MOS (CMOS) design since it has a lower power consumption.

MOSFETS are also utilized in the computer memory space, serving ROM and RAM functions. In early versions of SRAM, a binary bit was stored by using the state of a transistor that was part of a flip-flop. The charge held in a MOS capacitor by a modern DRAM device is used to store the data. Data is stored with floating gate MOSFETs in EPROMs, EEPROMs, and other newer forms of flash memory.

MOS capacitors are the building blocks for a wide variety of sensor kinds. In digital imaging, the charge from the photon is first stored in a MOS capacitor, which an IC then reads out. This process occurs in charge-coupled devices (CCD) and CMOS active-pixel sensors, two different types of sensors (CMOS sensors). In addition, MOS technology is utilized in the sensor industry for biological and chemical applications.

Is there a SiC power MOSFET?

Cree is the first company to develop a MOSFET that is commercially viable. The capacity to create these pieces depends on the gate structure, necessitating a solution considering physics and chemistry. Although some “tweaking” needs to be done with the process, the company appears to be far ahead of the competition compared to other businesses attempting to develop this technology.

SiC performs significantly better than Si in devices with rated breakdown voltages of 600V and above as a semiconductor material. SiC Schottky diodes with ratings of 600V and 1200V are commercially available today. They are already recognized as the best solution for increasing the efficiency of boost converter topologies and solar inverters. This is accomplished by replacing the previously-utilized Si PiN free-wheeling diodes, which were prone to significant switching losses, with the SiC Schottky diodes, which have lower switching losses.

At a gate-source voltage of +15 volts, the SiC MOSFET being addressed here is a device manufactured by Cree with a rating of 1200 volts, 20 amperes, and an RDS(on) of 100 milliwatts. In addition to having a naturally lower on-resistance, SiC also has a significantly lower on-resistance variation over its operating temperature. This is a significant advantage. Comparatively, the temperature changes for Si are in the region of 200% to 300%, but for SiC, they are only in the range of 20%. Although the SiC MOSFET die can function at junction temperatures higher than 200 degrees Celsius, the TO-247 plastic package that it comes in places a limit of only 150 degrees Celsius on the maximum temperature it can reach.

Let’s move on now that we have a basic understanding of what a MOSFET is. 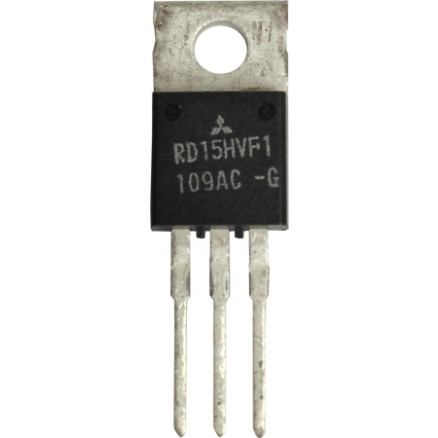 The RD15HVF1 is a MOS FET type transistor that was developed expressly for use in high-power amplifiers that operate at VHF and UHF frequencies.

This brings us to the end of this article. We hope that it will help you with your projects. If you have any burning questions about this article or any other on our website, post them in the comment section below, and we will answer them.

If you need to find a supplier for an RD15HVF1 transistor, ICRFQ has you covered. Get in touch with us right away; we’re the top provider of electronic components in China.