Everything You Need To Know About Resistor Color Code 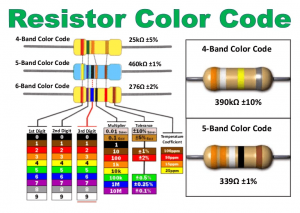 Have you ever bought a pack of resistors only to be embarrassed by how little you know about the colored rings on your new resistors? Why couldn’t they simply print the resistance value on the resistor and make everyone’s lives easier? If you’re unfamiliar with resistor color codes, keep reading!

Because resistors are small, printing numbers or the resistance value onto their little surface area is difficult. As a result, resistor color codes are employed instead of directly putting numbers onto the resistor. Resistors can have three, four, five, or six bands. The resistance, tolerance, and temperature coefficient are all represented by colored bands.

What Is Resistor Colour Code? 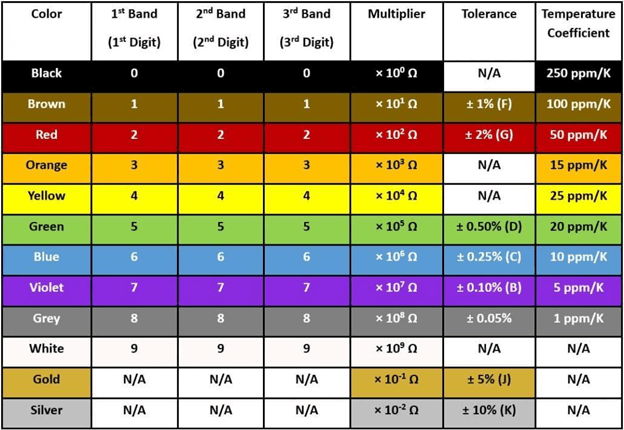 It’s difficult to print resistance values on resistors because they’re usually so small. As a result, color bars representing electrical resistance are printed on them. Resistor color code refers to these color bands. The Radio Manufacturers Association invented the resistor color code in the 1920s (RMA).

Color bands identify any leaded resistors with a power rating of less than one watt. They are defined by numerous bands that influence the resistance value, tolerance rate, and, in some circumstances, dependability and failure rates collectively. A resistor’s number of bands might range from three to six.

The first two bands represent resistance, while the third band serves as a multiplier. This post will look at how to read resistor color codes, see an example, and learn a mnemonic to memorize the number sequence.

Because the values needed to determine the resistance value are compiled on this chart, you’ll find yourself turning to it frequently. When we look at examples in the next part, we’ll get more information on how to use them.

This is the question that normally comes up because we can’t start calculating the resistance from the color-coding resistance unless we first get the reading direction correctly. Thankfully, there are some visual hints in the resistor color code that provide the answer!

Also, double-check your manufacturer’s paperwork to be sure the resistor color codes you’re using are correct. If none of the methods above work, you may always use a multimeter to check the resistance. This may be the only way to determine the resistance when the color bands have been scraped or burned off.

The first two bands of a 3-resistor color-coding always indicate the first two digits of the resistance value, while the third band denotes the multiplier.

The bands in this example are brown, black, and brown. The brown band closest to the margin is the first. When we consult our resistor color code chart, we see that brown has a significant value of 1 and black has a significant value of 0. The multiplier is 1 in the third band, which is brown. The resistance is thus computed using the formula: Because there is no fourth tolerance band on the 3-band resistor, the default tolerance is set at 20%.

The most popular variation is a four-band color code. There are two resistance bands, one multiplier, and one tolerance band on these resistors. The four bands in this example are green, blue, red, and gold. Using the color-coding chart, one can see that green represents 5 and blue represents 6. The multiplier is the third band, with red denoting a multiplier value of two (102). 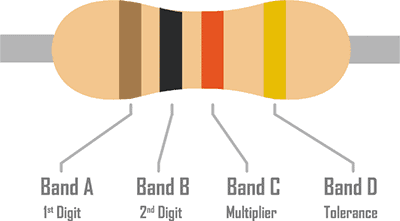 A third significant digit is indicated by an additional band on high-precision resistors. As a result, the first three bands denote significant digits, the fourth band denotes the multiplication factor, and the fifth band denotes tolerance. For the following example: A 147 resistor with a 0.5 percent tolerance is represented as brown (1), yellow (4), violet (7), black (x 100 = x1), and green (0.5 percent).

This 5-band color system has certain exceptions. The extra band may, for example, show a failure rate (military specification) or a temperature coefficient (older or specialized resistors). For more information, see the subsection “Color Code Exceptions” below.

A 6-band resistor has an extra ring that represents the temperature coefficient or, in some situations, the failure rate. The most common color for the sixth band is brown (100 ppm/K), which indicates that the resistance value increases by 0.1 percent for every 10°C change in temperature.

The resistor color code bands can be divided into two groups based on the distance between the multiplier and tolerance bands in this example. Read the resistor from left to right, with the larger group on the left and the smaller group on the right.

We examine the resistor color coding chart for red, violet, and yellow again, and the first, second, and third bands each have the significant numerals 2,7, and 4, respectively. The fourth band is black, resulting in a multiplier of 100. As a result, the resistance value will be 274 100 = 274 The tolerance value for the fifth tolerance band is 2%. The temperature coefficient value for the sixth band, which is black, is 250 ppm/K.

An additional band is sometimes added to military-specified resistors to signify reliability. The failure rate (percentage) per 1000 hours of service is provided. In commercial electronics, this is a rare occurrence. The dependability band is usually found on four-band resistors. The US military handbook MIL-HDBK-199 contains more information about reliability.

Zero-ohm resistors have a single black band that makes them identifiable. It’s essentially a wire link that’s sole purpose is to connect traces on a printed circuit board. Why not just use a standard jumper wire for that?

Because most components on printed circuit boards are put using automatic insertion machines rather than by hand, they are shaped to seem like resistors. Manufacturers can use the same automated machine to position components on a circuit board because the component looks like a resistor. This eliminates the requirement for a separate jumper wire installation machine.

5 Band Resistors with the 4th Band of Gold or Silver

The hues of gold and silver are frequently substituted for yellow and gray in high voltage resistors. This is to keep metal particles out of the coating. 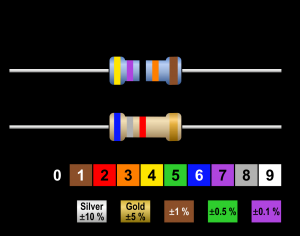 How does a resistor color code work?

Why are resistors color-coded?

Because resistors are often small, printing resistor values on them are tricky. As a result, color bars representing electrical resistance are printed on them.

How can I figure out which end of the resistor to read first?

Some color bands are packed closer together or toward one end of several resistors. To your left, hold the resistor with these grouped bands. Always read resistors from left to right when reading them.

A metallic band on the left is never used to begin a resistor. A 5 percent or 10% tolerance resistor is defined as a resistor with a gold or silver band on one end. Place the resistor on the right side of the band and read the resistor again from left to right.

How to remember the resistor color code?

The mnemonic device “BB ROY of Great Britain had a Very Good Wife” can be used to memorize the resistor color codes; the capital letters indicate the first letters of the colors, and their positions reflect the digit values.

Is there a clever way to remember the chart’s color order?

While there are various mnemonics for memorizing the color sequence for the resistor color code chart on the internet, some are more enjoyable than others. Another method to remember the color chart is to see black as the absence of color, which is “0,” and white as the mixture of all colors, which is “9.”

The traditional rainbow colors for numbers 2 through 7 are in the center of the color chart, so your childhood ROY-G-BIV acronym applies, minus the color indigo. Just remember that brown is the number “1” between black and red, and grey is the number “8” between violet and white, and you’re good to go!

What is a “reliability“ band?

An extra band is frequently included on four-band resistors to represent dependability or the failure rate (percent) per 1000 hours of service. This is rarely used in commercial electronics.

What is the resistor color code for a 1000 Ω resistor?

A 1000-ohm resistor has a four-band color code that goes from brown to black to red to gold. The 1000 resistor has a multiplier factor of 100 (Red) and a 5 percent tolerance level (Gold).

Who invented the resistor color code?

The Radio Manufacturers Association created the color-coding in the 1920s (RMA).

Resistors come in a variety of values, forms, and physical sizes. On nearly all leaded resistors with a power rating of up to one watt, a pattern of colored bands is utilized to display resistance value, tolerance, and occasionally even the temperature coefficient.

On the body of a resistor, there can be anywhere from three to six colored bands, with four bands being the most frequent. The first few bands are always digiting in the resistance value. Then there’s a multiplier band to indicate whether you’re moving the decimal right or left. The last two bands represent the temperature coefficient and tolerance.

Reading resistor color codes is simple once you grasp the logic and math behind each band used to show resistance value, tolerance, and sometimes even the temperature coefficient. We hope that the information in this article has provided you with a better understanding of resistor color code.

Lastly, if you’re looking forward to purchasing resistors or have any questions on the color code, we at ICRFQ are just a call or email away. Remember, we are the best Resistor manufacturers in China.