Everything You Need to About RF/IF and RFID

Radio Frequency Identification (RFID) has been increasingly popular in manufacturing. For high-speed inventory and efficient logistics management, this technology is used. Companies that have used this technology have reported higher productivity and lower costs due to their efforts. RFID has been thrust into the forefront since then. After so many years, it became well-known for its advanced characteristics.

RFID technology, which is still in its infancy, has several characteristics and benefits. This technology is powerful in terms of dependability, efficiency, and precision. But have you ever pondered why RFID took so long to catch on? Do you have any notion why investors were afraid to invest in this contemporary technology at first? The short answer is money. Yes, the tags are costly, and integrating RFID systems into millions of things would be prohibitively expensive. However, will the high expense of this technology prevent it from progressing? Certainly not.

Before we get into the drawbacks, let’s look at the fundamental concepts of this technology. We’ll learn the definition of RFID, as well as its functions and components, together.

What’s the difference between RF and RFID tags?

The word “RFID” is sometimes used interchangeably to refer to both, but there is a significant difference:

RFID tags give more sophisticated signals that uniquely identify whatever they’re attached to. In contrast, RF tags constantly emit the same, simple signal that alerts the receiver that something is present.

These are the most basic RF tags, and they’re primarily utilized in electronic article surveillance (EAS), which is the anti-shoplifting approach I mentioned before. None of the tags are unique, and none identify the articles to which they’ve been linked. When you try to steal something in a store, RF tags set off the alarm, but the alarm mechanism has no idea what you’re stealing, only that you’re stealing something: there’s no way to identify one item from another.

The acousto-magnetic technology is one of the most widely used RF technologies (AM). The tag is struck by a pulsed beam of radio waves from the transmitter, which causes it to emit a particular frequency radio signal. The receiver detects the signal, checks that it is on the correct frequency, and activates the alarm. AM tags are used in antitheft systems because they can be read from a great distance and at fast speeds (which have only seconds to pick up a signal from someone walking or running through a shop doorway).

These are more complex than ordinary RF tags in that they uniquely identify the item to which they’ve been attached: the radio signal sent from the product to the receiver contains a digitally encoded identity. Libraries’ self-checkout machines work by sending radio waves into the RFID tag on the back of the book, receiving the signal, and decoding it to generate a digital code that uniquely identifies the book you want to check out.

The rest is handled by a computer connected to the scanner (in a library, for example, the self-checkout machine communicates with the library’s computer to update the central database whenever a book is checked out or returned). RFID tags, unlike RF tags, work over considerably shorter distances. Some must be held immediately next to a reader device, while others can be held at a distance of only 10cm (4 inches).’

Passive RFID tags are simple RFID tags that do not transmit data. They don’t have any batteries and rely solely on the incoming radio waves from the scanner or transmitter to function. Those radio waves have just enough energy to activate the RFID chip. Signals sent and received by passive tags are often only a few centimeters apart. Active tags, a type of RFID technology that uses more advanced chips and tiny batteries to power them, are an alternative to passive tags. They are capable of transmitting and receiving signals over much longer distances.

The term “radio frequency” refers to electromagnetic radiation to convey data between two circuits that are not connected electrically. Electromagnetic energy is generated by time-varying voltages and currents and propagates in waves. We may wirelessly transport analog and digital data by modulating and interpreting these waves. The most common form of wireless communication is EMR. Light (as in fiber optics) is an alternative, but RF is more adaptable because opaque surfaces do not hinder lower-frequency EMR.

RFID stands for “radio-frequency identification,” It refers to a technology in which a reader captures digital data contained in RFID tags or smart labels (described below) using radio waves. RFID is similar to barcoding in that data from a tag or label is collected by a device and saved in a database.

On the other hand, RFID provides significant advantages over barcode asset tracking software. The most significant difference is that RFID tag data may be read without being aligned with an optical scanner, whereas barcode data must be aligned with an optical scanner. Take the next step and contact the RFID experts at AB&R® if you’re thinking about installing an RFID solution (American Barcode and RFID).

How does RFID work?

The Automatic Identification and Data Capture (AIDC) technology group includes RFID (AIDC). With little or no human intervention, AIDC methods automatically recognize items, collect data about them, and enter that data straight into computer systems. Radio waves are used in RFID methods to accomplish this.

An RFID system consists of three essential components: an RFID tag or smart label, an RFID reader, and an antenna. An integrated circuit and an antenna make up RFID tags, which transmit data to an RFID reader (also called an interrogator). The reader then converts the radio waves into a more usable form of data. The data collected from the tags is then communicated via a communications interface to a host computer system, where it can be kept in a database and analyzed later.

Active RFID tags operate with the help of a power supply. They are either connected to a battery or a powered infrastructure. The active tags will stop working when the power supply is gone. The RFID package would be significant if it had a battery incorporated. The usage of active tags in retail becomes impractical.

Passive tags are used in this sort of RFID. Active tags require a power source, whereas passive tags do not.  It absorbs the energy emitted by a reader’s radio frequency field to provide all of its required energy to function. Because passive tags do not require batteries or maintenance, they are appealing. The tags are also small enough to be included in a helpful sticky label.

There are only a few components that make up the RFID system. These components must perform in unison to achieve reliable data transmission and reception. 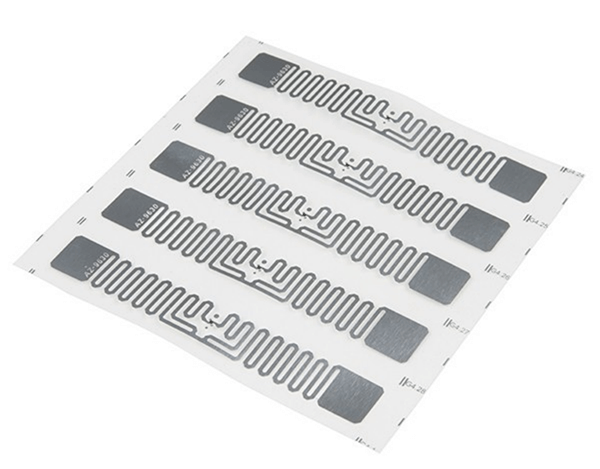 A tag is a unique information-programmed transponder affixed on a substrate. When tags travel across a radio frequency field created by the reader’s antenna, they are activated.

A reader (also known as a transceiver or interrogator) controls radio communications via the antennae. A reader can transmit signals to a tag, synchronize a tag with the reader, and interrogate all or part of the tag’s contents. Thus, the primary purpose of the reader is to transmit

A coil with a winding and a corresponding network makes up an antenna. An antenna’s principal function is to transmit the electromagnetic waves generated by the reader while also receiving radio frequency signals from the transponder.

The reader interface layer serves as a link between readers and hardware components like computers.

How to Choose the Right RFID?

So, you’ve decided to incorporate this technology into your company. The elements to consider when selecting the proper RFID are listed below.

Electromagnetic waves are used in the system, which is usually in the Low Frequency (LF), High Frequency (HF), and Ultra High Frequency (UHF) bands. The tags and readers must operate at the same frequency to communicate.

Because bandwidth is a limited resource, each country has its restrictions defining the frequency bands for RFID transmissions. If you don’t select a frequency range appropriate for your region when choosing an antenna, your system will not work.

Null zones can form where waves overlap when antennas face each other and generate waves in the same direction. As a result, determining the polarization of your antennas is critical for maximizing RFID functionality.

What are the types of RFID systems?

Low frequency (LF), high frequency (HF), and ultra-high frequency (UHF) RFID systems are the three main varieties (UHF). There is also a microwave RFID option. The frequency of radio broadcasts varies substantially depending on the country and location.

The frequencies span from 30 to 500 kHz, with 125 kHz most common. The transmission ranges of LF RFID are limited, ranging from a few inches to less than six feet.

These frequencies vary from 3 to 30 MHz, with 13.56 MHz being the most common HF frequency. The typical measurement range is a few inches to many feet.

These frequencies vary from 3 to 30 MHz, with 13.56 MHz being the most common HF frequency. The typical measurement range is a few inches to many feet.

These operate at 2.45 GHz and may be read from a distance of more than 30 feet. The frequency used will be determined by the RFID application, with actual distances attained occasionally differing from those intended. When the US State Department announced it would issue electronic passports with RFID chips, it stated that the chips could only be read from a distance of about 4 inches.

On the other hand, the State Department quickly gathered evidence that RFID readers could receive data from RFID tags from distances greater than 4 inches — up to 33 feet in some situations. If longer read ranges are necessary, more powerful tags can extend read ranges to 300 feet or more.

RFID applications and use cases

RFID was first employed in the 1940s, but it became increasingly popular in the 1970s. The prohibitive cost of tags and readers made commercial use impossible for a long time. RFID adoption has increased as hardware costs have fallen.

Traveling on national highways is enjoyable until you reach the dreaded toll booth. It’s not the toll that’s the issue; it’s the amount of time it’ll take you to maneuver your car through that tight entrance finally. When you finally get to the counter, you begin haggling over cash and toffees.

However, numerous countries have adopted RFID to pay for tolls at toll booths. Like smart cards, EZ-Link cards are used in Singapore to pay for tolls, whereas Norway uses the auto PASS toll collecting system. So, all you have to do is walk through the booth, and your tagged card or vehicle will be tracked, and payment will be made immediately.

If you’re into mobile phones, you’ve probably heard of this word. NFC-enabled phones can make payments straight through their phones, and don’t worry, and the payment will only be performed once the user enters a passcode or PIN.

Passports, animal identification, inventory systems, and hospital operating rooms are other places where RFID tagging has been applied. So, for the time being, that’s the extent to which RFID is infiltrating our lives.

To conclude on a positive note, RFID tags can be pretty helpful in our everyday lives. Electronic product tracking will allow businesses to see how far their products have traveled and how many are sold each day. On the other hand, issues such as the depth of RFID penetration and security concerns about encryption standards must be addressed. However, there’s no disputing that RFID is a technology that we’ll be experimenting with in the future.