RTD vs Thermocouple: What’s the Difference?

The most common type of temperature sensor is an RTD, which stands for Resistance Temperature Detectors. Thermocouples, like RTDs, are commonly used to measure temperature ranges. Because of their simplicity, these two sensor types are preferred above other methods for measurements.

Furthermore, while processing temperature measurements, these eliminate the time-consuming conversion step. There are, nevertheless, several important distinctions between RTD and Thermocouple. The differences between an RTD and a thermocouple are highlighted in this article.

RTDs are temperature measuring devices. Depending on the device’s design, this temperature measurement gadget can be found in various styles. On the other hand, an RTD has a much simpler main and basic structure. Its benefits are well-known and widely used.

Resistance Temperature Detector (RTD) The choice and design of the protective sheaths featured in a resistance temperature detector are given the utmost attention throughout their manufacturing. These sheaths are crucial to the device’s operation.

These protective sheaths are known because they ensure that the primary device is protected in the event of a chemical or physical hazard and provide simple attachment points. The overall operation of these devices is based on electrical resistance.

They require a power source to function since they utilize electrical resistance. Different detectors have various wiring arrangements. A two-wire, three-wire, or four-wire design is available.

There are some drawbacks and benefits to using the Resistance Temperature Detector. Its benefits include little drift, an extensive operating range, and so on.

Thermocouples are a sort of gadget or sensor that can be used to measure temperature. A thermocouple’s operation entails the connection of two wires made of two different metals, heating one of the wires, and the current passing through the thermoelectric circuit.

A thermocouple is a sensor that measures temperature during chemical and physical processes. Several companies make these in a variety of styles. These thermocouples are slightly different from one another. They both have their own set of advantages and disadvantages.

A thermocouple is an effective sensing device that successfully fulfills its objective when used correctly and with great caution. It also has several benefits, including cost-effectiveness, the ability to measure a wide range of temperatures, tough construction, and the lack of the need for additional bridged circuits, among others.

What is the Use of Thermocouples?

What Is the Importance of Using A Thermocouple?

Why use an RTD Sensor?

The main advantage of an RTD sensor (Pt100, Pt1000) is that it has good accuracy over an extensive range and is very stable. On the other hand, a thermocouple is less accurate, less stable, and can drift over time. RTD Sensors are better suited to lower temperature ranges where precision and repeatability are required.

Due to stem conduction faults, they must also be submerged in the media. Using normal electrical connections is a practical advantage of RTDs over thermocouples. Compensating alloys and connections are required over the whole length of the thermocouple up to the instrument’s connection.

Most current-measuring instruments will have all common thermocouple input types, such as Pt100 or Pt1000 for RTDs and K, T, J, N, or R & S for Thermocouples. However, distance and location are more significant when choosing a device. 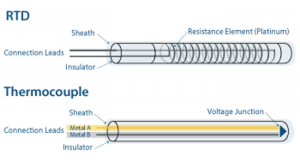 Because the names include a wide range of temperature sensors designed for a variety of applications, it’s impossible to say whether RTDs or thermocouples are the better options overall. Instead, it is more beneficial to compare the performance of RTDs and thermocouples based on specific characteristics such as cost and temperature range, allowing consumers to make decisions based on their individual needs.

Thermocouples generally outperform RTDs in cost, robustness, measuring speed, and temperature range. Most thermocouples are 2.5 to 3 times less expensive than RTDs, and while RTD installation is less costly than thermocouples, the cost savings are insufficient to tilt the balance.

Users reading the same temperatures give the same results in repeated attempts, known as repeatability. RTDs produce more reproducible readings, which means they are more stable, and their design assures that they continue to produce stable readings for longer than thermocouples. RTDs also receive more robust signals, and their design makes it easier to calibrate RTD readings.

Thermocouples are best for working at high temperatures. New manufacturing techniques have improved the measurement range of RTD probes, but more than 90% of RTDs are designed for temperatures below 400°C. In contrast, some thermocouples can be used at up to 2500°C.

Thermocouples are generally cheaper than RTDs. An RTD will often cost two or three times more than a thermocouple with the same temperature and style. Savings can be made on RTD installation, cheaper as inexpensive copper wire is used. However, this saving is not enough to compensate for the higher device price.

The temperature-resistance relationship in RTDs is almost linear in the sensor range, whereas thermocouples have an ‘S’-type plot.

For a long time, RTD probe readings have been stable and consistent. Because of chemical changes in the sensor, thermocouple readings can drift (such as oxidation). RTDs are more stable in the long run due to their linearity and lack of drift.

Thermocouples are more cost-effective because of their less expensive production process. This can be a significant effect depending on how many probes you require for your application. RTDs, on the other hand, produce more consistent results. You can now choose the most appropriate sensor type for your application after carefully analyzing the range and performance requirements.

Temperature can be measured using both resistance temperature detectors and thermocouples in a variety of physical and chemical processes. They do have certain flaws, but their benefits outweigh them. They give the precision and stability needed for a certain process.

Inventions like these benefit humans in a variety of ways. They facilitate a certain activity while simultaneously ensuring accuracy. They are exceedingly unlikely to make an error because they give accuracy. We hope that this article has been helpful to you and your research.

Lastly for more question regarding RTD VS Thermocouple, contact us at ICRFQ, we are the best electrical components manufacturer in China.