Everything You Need To Know About Slide Switch 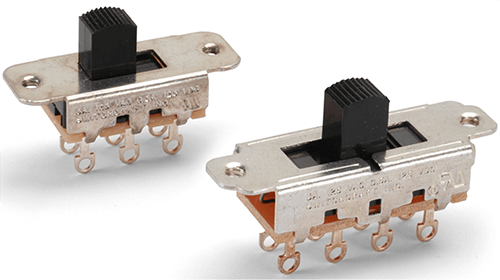 The passage of an electrical current across a circuit can be adjusted in various ways, with slide switches being one of the most often utilized. This is particularly true in circumstances where space limits must be considered. Slide switches offer a convenient and dependable control, with circuit connection or disconnection accomplished by a simple sliding motion. This brief blog will introduce slide switches, including their functioning, main settings, and what should be considered during the choosing process.

What is Slide Switch? 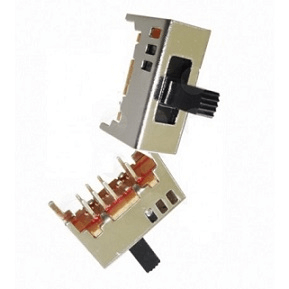 It  is a mechanical switch that controls the current flow in a circuit by moving the slider from the OFF  to the ON  position. Without manually cutting a wire, this switch adjusts the current in a circuit. Unless manually modified, these switches will remain in the same position.

How Does Slide Switch Work?

A slider is used to shift from the ON to the OFF position on slide switches. In tiny projects, they manage the flow of electrical current within a circuit. A metal seesaw metal and slide are used to create these switches in two different ways.

Metal slides are employed in most features that contact the switch’s flat metal elements. When the switch’s slider is moved, metal slide contacts can travel from one set of metal contacts to the other, allowing the switch to be activated.

A metal seesaw is used in the secondary design, too. A spring is included in the slider of this switch, which pulls down on one face of the metal seesaw if the other is not pushed down. These are maintained-contact switches, which means they wait in one state till they are activated into the latest state, then remain in that condition until they are engaged again.

Different varieties of slide switches are available on the market, and they are employed according to the requirements. These switches will be described further down. 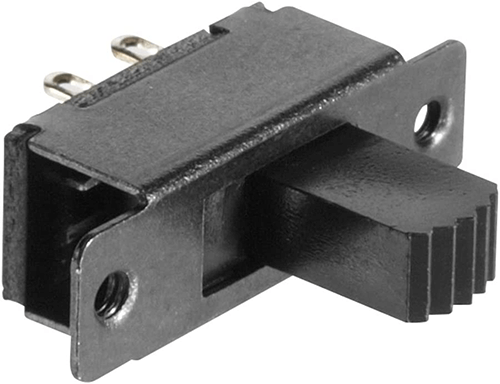 One terminal of an SPST slide switch is attached to one side of the circuit, while the other is connected to the other. The slider does not move if no force is applied; it remains in the “off” position, thus disconnecting both sides of the circuit. When you drag the slider toward one of the terminals, it turns “on,” shutting that terminal.

These switches are primarily utilized within a single branch circuit to make or break the connection between two circuit conductors. These switches usually have four connections. Spring separates the contacts mechanically, but a central pi makes an electrical connection. 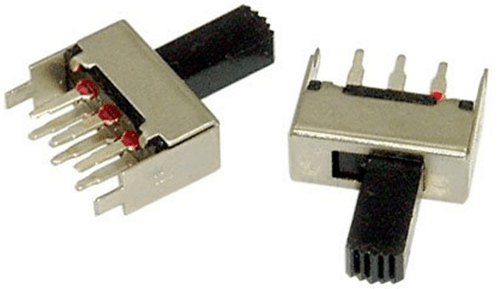 A DPST slide switch can be designed in a variety of ways. There could be indication lights to signify which position has been picked; there could be more than two poles on every side of the switch; several throws inside each pole; and so on. 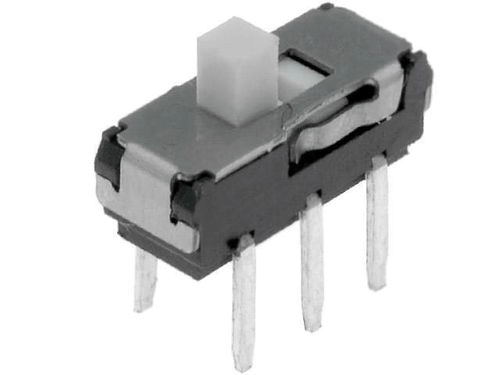 These switches connect the two wires into two distinct circuits. These switches typically have six terminals. Two of the terminals are hooked inside the switch since they are connected internally. The remaining four terminals are connected to external electrical devices and circuits. The circuit will conduct electricity in just one direction if the voltage is applied to one pair of terminals and the ground is applied to the other pair. A short circuit occurs when you apply voltage to both pairs of terminals simultaneously.

Metal slides that touch the switch’s planar metal elements can be used to build the slide switch. When the switch’s slider moves, metal slide contacts glide from one set of metal contacts to the next, activating the switch. The terminals, contact, sliding, and handle of this switch are explained below.

This switch has three terminals, including one common pin and two other pins that fight for connection to the common. These are best for switching inputs and switching between two power sources.

A sliding contact is an electrical contact in a switch that allows the current to pass across it. The most common types of contacts are rotating parts, such as a commutator or slip-ring, and a stationary portion, such as a brush. The materials utilized in these contacts primarily require a low wear rate, consistent contact voltage, and low contact resistance.

A slide switch has a bar handle that is used to change the state of the switch by sliding it from one place to another.

The electrical parameters listed on a slide switch handbook will tell you how much current and voltage the switch can manage and withstand voltage and insulating resistance. The actuation travel distance and the operating force required for actuation will also be covered in the handbook. Before deciding on a certain switch model, these figures must be reviewed and properly comprehended.

Through-hole, Surface mounted panel mount versions of slide switches are also common. Which is best will be determined by the nature of the available space, manufacturing process, and the mechanical stresses of the application, as these may affect board retention.

A panel-mount switch is installed in the outer half of the slide switch to provide protection. Standard, tiny, and subminiature slide switches are available.

The maximum AC/DC voltage that can be enabled through the switch ends at any given time is called max AC/DC voltage.

The maximum mechanical life of a slide switch refers to how long it will last. In many cases, the average electrical lifespan of a switch is less than that of its mechanical counterpart.

Engineers must consider the specific application characteristics and influence before deciding which slide switch to use in their system design. Some of the  important issues that will need to be addressed include:

The following are some of the benefits of using a slide switch.

The following are some of the drawbacks of using a slide switch.

● If you move the slider around a lot, it will lose its sharpness and eventually fail.

● The mechanical component has the potential to exhaust.

Slide switches are a fantastic set of controls. They’re also an intriguing piece to manage voltage and current because of their broad range of applications. Many important aspects of slide switches have been clarified in this text. Slide switches are truly one-of-a-kind power control items, from the way they are operated by a slide to the features that distinguish them from other switch kinds. Fortunately, this article has also addressed how to attach it and the several applications for which it can be utilized. You can also look at the many features to see which is best for your project.

Slide switches are well-known mechanical switches that provide basic functionality, most commonly when moving between states. They provide the user with the visual benefit of knowing exactly which state the switch is in and consistent and sustained switching mechanism control. Engineers can choose the right slide switch for their project if they have essential specs, basic awareness of their regular configurations, and design factors.

For more details on slide switches, contact us at ICRFQ, we manufacture and sell the best electrical components in China.