Everything You Should Know About SPDT Switch

Switches are devices that are used in electrical wiring to change the flow of electricity. Single pole double throw switches are a common component in our everyday lives. They are essential for connecting electrical appliances, fixtures, and devices to power sources. However, few of us know much about these switches.

Although they may appear simple, they are much more than that. In this article, we will discuss everything you should know about SPDT switch.

What is a SPDT switch?

SPDT stands for single pole double throw switch. As the name suggests this type of switch has a single input terminal and two different outputs. The switch has three terminals. Two of them are connected to separate wires that lead to the respective output. The third terminal is a common terminal that is connected to the other two terminals.

This arrangement allows the switch to control two different circuits using a single input. It can switch between two outputs by simply reversing the direction of the current flow.

SPDT switches come in a wide range of sizes and shapes. However, the most common ones are the lever switches that are rectangular in shape and have a lever on one side. These types of switches are found in light fixtures, power outlets, and many other places. The lever is used to turn the switch on or off.

Still, on the design and structure, a typical SPT switch comprises the following components;

The pole is the point where the input wires are connected to the switch and are also the point where both the output wires are connected to. The pole is a terminal that is located in the center of the SPDT switch. It is the main controller of this switch since the current comes through it. In this switch, we have one pole hence the name “single pole”.

The throw is one of the two outputs of an SPDT switch. The throw is a terminal that is located on one side of the pole. Both ends of an output wire are connected to this terminal. This terminal can be moved across to connect with either one of the other terminals in order to select any one of two inputs or outputs depending on which direction the current flows through it.

This common terminal connects with both other terminals at once, making it possible for current to flow through all three terminals, but only when in the correct position.

That said, this common terminal has no power rating and should be made from high-conductivity material like copper for maximum efficiency and safety purposes. It should be noted that this terminal does not have any load rating to it and is not rated for any power.

This terminal is connected to the middle of the throw in order to make it possible for current to flow through all three terminals, but only when in the correct position.

The neutral terminal is used as a connection point that connects one end of an output wire to either one of the other two terminals depending on which direction the current flows through it.

How does the SPDT switch work?

This switch provides a basic understanding of how an SPDT switch works. It is used for simple circuits and can be found in many electronic devices such as wall warts and televisions, to name a few examples.

Because of its simplicity and its ability to be used with AC or DC power supplies, it is very useful for many applications that require switches for each direction (on/off) as well as one-way switches (on/off).

This is a type of connection where the pole is connected to the throw by default. It can be used when it is necessary to make a connection in order for the switch to work properly. For example, if you want a light switch that turns on and off automatically, you would use this type of connection.

For instance, in an AC circuit, current can flow from the positive terminal through one or more MOVs and then through another SPDT switch, and finally through another MOV before reaching its destination (positive pole). The NC connections are found in many appliances such as digital clocks, televisions, and many other electronic devices that require switches for each direction as well as one-way switches (on/off).

The common connection is the most commonly used type of connection. It is used to connect two poles (or two terminals) for either both or none of the switches are connected. For example, a light switch can be set to this position by default. The COM connection is found in many appliances such as digital clocks, televisions, and many other electronic devices that require switches for each direction as well as one-way switches (on/off).

SPDT switches are not all the same. They come in different designs, forms, and even operation modes. They are divided into broad categories. These are BBM switch and MBB type switch. Let’s look at the differences between these two.

On activation, the pole will detach from the NC circuit and it will connect to the NO circuit, reversing its default mode. BBM switch has two poles. When the switch is activated, the two poles are connected to each other with the exception of one pole that is kept isolated.

MBB stands for Make Before Break. This is a type of SPDT switch in which by default the pole is connected to the normally open circuit. This makes it a one-way switch, because when the circuit is activated, instead of connecting to the NO circuit, it will disconnect from it and connect to the NC circuit. The pole remains disconnected from both circuits when this type of switch is activated as well as when it’s not activated (i.e., in its default position).

MBB switches have only one pole. When this type of switch is activated, it will connect to both circuits (NC and NO) with the exception that one pole remains disconnected from both circuits when the switch was not activated or in its default position (i.e., no connection between these two circuits). 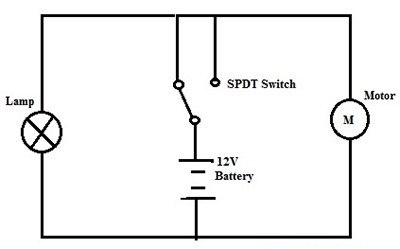 From the diagram above, you can see that the SPDT switch works like any other ON/OFF switch, especially when connected to a circuit. As long as the switch is not activated, the switch will remain in its default position, which is connected to both circuits.

SPDT switches generally have three poles and are usually found on toggle switches. They are considered “three-way” switches because they connect to three different circuits when they’re in their ON position. They can also be used for other applications such as a dimmer or a relay to control other devices or appliances.

Advantages and Disadvantages of SPDT Switch

At this point, we can check out the pros and cons of using SPDT switch in their respective application areas.

-Affordable: SPDT switches are relatively cheap compared to other types of switches and are often used in applications where they’re not required to be super high-end.

-Can be used for multiple applications: SPDT switches can be used in different applications such as a dimmer, a timer, and an ON/OFF switch.

-Supports high voltage: SPDT switches are capable of handling large voltage circuits without blowing off or being affected by any other form of electrical, mechanical or physical damage.

-Relatively complex wiring: SPDT switches have relatively complicated wiring configurations and are difficult to work with for beginners.

The above information is very generic and may not be applicable to all types of SPDT switches. Please refer to the specifications of your switch for more detailed information on its type, operation, and wiring configurations.

Here are some of the areas where SPDT switch are rampantly used;

-In motor controller: Motor controllers are used to control the speed of motors. These motors are connected to other electrical components and they can be switched on or off when needed by using SPDT switches.

-In lighting circuit: LED lights are widely used in many areas, such as homes, offices, and stores. They are also used in automotive and industrial applications for a variety of purposes that include signaling, illumination, etc.. These lights may be turned on or off depending on the need at specific times or when certain events occur.

-In any application that involves turning on or off a relay: Relays are used to switch electrical loads. They can be controlled by switching the power source from AC to DC or DC to AC.

What should I look at when buying SPDT switch?

So you want to end up with the best SPDT for your application? Here are some of the things that you should consider;

-Voltage rating: Most SPDT switches have a voltage rating of 24VDC. This means that they can be used with any AC voltage that is within the range of 24V to 120V.

-Number of poles: Most SPDT switches have 2 poles, which are commonly referred to as Normally Open (NO) and Normally Closed (NC). They have 3 poles when the switch is in its OFF position.

-Operation mode: Most SPDT switches operate on either DC or AC power depending on how they are wired.