With all of the gadgets and technologies that many of us use, it’s no surprise that more electric plugs will be required over time. As a result, many people turn to various possibilities to offer them more outlets.

If you’re looking for these extra outlets, you might be confused about the difference between power strips and surge protectors. The question you’re probably wondering is, “What’s the difference?”

We’ll provide you with a thorough explanation in this article to help you educate yourself and make an informed decision when choosing the proper outlet for your home.

What Is a Power Strip?

A power strip is probably something you’ve seen a thousand times before. It’s a long stretch with a lot of outlets. On one end, there’s a cable, and on the other, there’s nothing. The cable plugs into a wall outlet, and the strip provides many outlets for powering your devices. 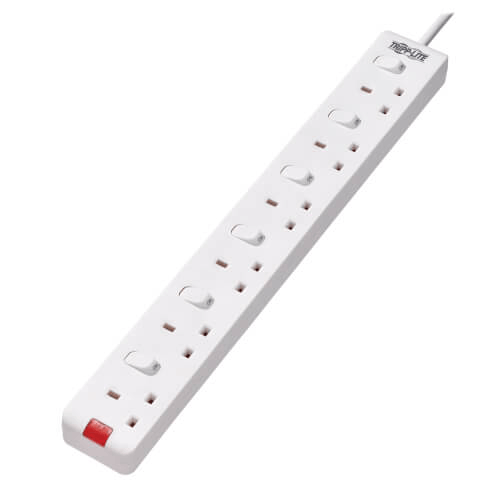 Everything you plug into the strip’s outlets will be powered by the wall outlet it connects to. A power strip aims to provide you with additional outlets to connect things into. Who doesn’t like having more options? It’s similar to an extension cord on steroids.

Keep in mind that power strips can only handle so much electricity. A standard power strip can handle up to 1800 watts in a typical 120V home (the same as the wall outlet). If you’re unsure, the wattage is printed on the power strip’s packaging and the bottom side of the strip.

Overheating, electrical failure, and even an electrical fire can arise from plugging in too many gadgets that require too many watts. If you connect to the wrong device, your device may become overloaded. Floor heaters should never be hooked into a power strip, for example. It makes sense when you consider it: all of this power is coming from a single outlet. Your outlet does not have an endless amount of energy to supply.

Main Uses for a Power Strip

The most common application for a power strip is to expand the number of outlets into which devices can be plugged. When you only have two plugs in your home’s standard wall outlets, what happens when you need to plug in three devices? A power strip will come in handy in this situation.

Another advantage of using a power strip is how simple it is to turn it on and off. A single on/off switch on many options will turn off electricity to all connected devices. It makes controlling several electrical appliances at the same time much easier. Let’s discuss surge protectors now that you know more about power strips.

What is a Surge Protector?

The concept of a surge protector may be perplexing at first. Surge protectors are electrical outlets that, believe it or not, safeguard your device from power surges. They employ a customized circuit that delivers electrical spikes directly into the earth, bypassing the electrical equipment. It’s similar to a valve that opens only when higher-than-normal voltage is sensed. Your gadget will not be fried as a result of this power redirection. 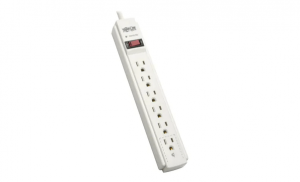 It’s worth noting that most surge protectors function similarly as a power strip, and they often resemble one. There are outlets for plugging in your devices and an on/off switch in most cases. On the other hand, Surge protectors are far more expensive than regular power strips due to the particular circuit that protects your gadgets. Many people believe that because they appear the same, they act the same, and because a power strip is less expensive, they select for it. Because power surges can ruin your equipment, this is a bad idea.

What is an Electrical Power Surge?

When your electrical supply is disrupted, this is known as a power surge. Your devices require a constant collection of data at all times. A power surge can occur when a large item (such as your air conditioner or refrigerator) is turned on, when lightning strikes, or when an electrical transformer is struck by something. Furthermore, the electricity delivered by your electric company does not always supply a consistent stream of power. These circumstances will cause a temporary disruption in the amount of electricity flowing to your home’s electronics.

When it comes to the severity of a surge, there are various options. A significant surge is regarded as something like a lightning strike. Electrical appliances and electronics may fry, melt, or malfunction due to a significant surge. You’ll require an emergency electrical contractor if you don’t have a surge protector. It frequently results in permanent harm.

Over time, little surges and micro surges will also cause damage. Before your equipment quits working, the wires and circuits inside it will gradually deteriorate. It’s almost like comparing a million punches from a child vs. a single hit from a bodybuilder – both cause injury.

This emphasizes the value of a surge protector. It protects your gadgets against minor and huge surges, which occur far more frequently than you realize.

How Often Do Power Surges Happen?

The truth is that your home may experience a dozen or more minor power surges per day. Significant surges are rare, and they almost always occur during a rainstorm. Many of your electrical gadgets are at risk when lightning strikes a power line outdoors.

What Are Electrical Items at Risk in a Surge?

A power surge can damage appliances such as dishwashers, televisions, computers, and washing machines. Any of these devices can be irrevocably damaged by a significant surge.

Given the high cost of these items, you can see how critical a power surge is. Investing a few dollars in a surge protector can save you hundreds or even thousands of dollars in damage. That is if you choose the proper one.

How to Select a Surge Protector

Main Uses for a Surge Protector

A surge protector can be used for the same purposes as a power strip. The difference is that a surge protector also protects the gadgets against an electrical surge. These can be found in both home and commercial settings. You might even utilize a commercial-grade surge protector in your house for high-powered items like an air conditioner or a refrigerator.

If you speak with an electrician before remodeling your home, they will be able to install various surge protectors throughout the house expertly. Surge protectors can also be used in your home office. Consider how many sensitive electronics are utilized daily: a computer, printer, fax machine, and monitor, to name a few.

A surge protector will keep these pricey electronics alive, but it will also allow you to plug in multiple devices in a short space. Although these may appear quite similar to power strips, there are some significant differences.

What Is the Difference Between a Surge Protector and a Power Strip?

When you come across a joules rating on the package, you may see the difference between the power strip and the surge protector, despite how similar they appear. This rating will only be given to surge protectors. Joules are a unit of energy measurement (like watts or calories). They calculate the amount of time your appliances will be protected. It may take only one large burst of power to exceed the number of joules that your equipment is protected against, but it could also take ten or fifteen small surges.

Remember that the number of joules that your power strip can protect you from acts as a reservoir. You may see a 2,000-joule label on your surge protector when you first buy it, but this may diminish with time. The level of protection provided by your surge protector will deteriorate as it takes blows from power surges, either all at once or overtime.

So, how do you know the difference between a surge protector and a power strip? You can’t always tell, is the plain answer. Some surge protectors include a light that turns on when the reservoir is low, while others have a simple alarm system that alerts you when to replace the unit.