Everything You Need to About Surge Protectors

Most electronics have special features that improve their performance and lengthen their lifespan. One such device is the surge protector.

In this guide, we are going to look at everything that you should know about surge protectors. At the end of it, you will be able to buy the best surge protectors for electronic devices and appliances.

What is a surge protector? 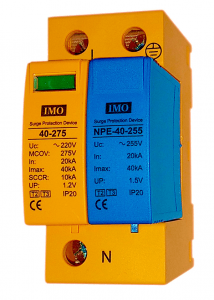 Before we go any further, let’s look at what exactly surge protectors are.

A surge protector is an electrical device that protects devices from surges. A surge can occur when large amounts of electricity are released in a short period of time. These surges can damage electronic devices and appliances, sometimes permanently. As the name suggests, surge protectors work as a shield against such surges.

How does a surge protector work? 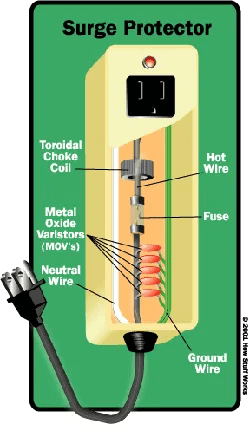 Surge protectors are also called “surge suppressors” or “surge diverters”. They are designed to divert extra electricity away from sensitive electronics and appliances, thus preventing damage to them.

They work in the same way as your home’s lightning rod does. During storms, lightning can enter your home through any opening it can find. Instead of damaging your entire house, the lightning strikes the lightning rod on top of your roof that is specifically designed to attract it. This then discharges the electricity harmlessly into the ground.

The surge protector uses one of three methods to protect your devices: reflow, clamping, and voltage limiting. Reflow is the most common method that works by channeling all the extra electricity back into the ground wire.

Clamping is also common and it ensures that if any extra electricity does get past the reflow, it gets clamped and cannot enter your device. Voltage limiting is another type of surge protector that acts as a direct resistor for electricity that flows through it.

There are different types of surge protectors that you should know. Let’s look at some of them:

Reflow surge protectors are the most common type found on the market. It is so widely used because it is cost-effective, reliable, and prevents most forms of damage to your devices.

They are designed specifically for this purpose, so they work quite effectively to safeguard your devices against this major risk of damage.

There is a myth that surge protectors can be used in place of insurance in high-risk areas like the tropics due to lightning strikes, but this is false. You should still take out insurance as a safety measure against other risks like fire and burglary.

Reflow surge protectors work by flaming the additional current back into the ground wire. If there isn’t one, then it just gets channeled to an external ground that you provide such as the piping of your house or cage for electronics.

The difference is that instead of using the ground wire, it directs the extra power to another wire in your device that has a lower voltage. This in effect reduces the electricity that is required to operate your devices.

Although not as efficient in safeguarding devices from surges, they still work well and are more than enough for most people’s needs that don’t require large appliances or devices. From this, we can see that clamping surge protectors are more suited to smaller devices than reflow surge protectors.

Voltage limiting surge protectors are designed for larger appliances and electronics that need more power to operate. Because large appliances require so much energy, voltage limiters act as a direct resistor for the extra electricity to lower it.

This type of surge protector is perfect for running appliances that are very sensitive to high voltage, such as air conditioners and refrigerators. The main disadvantage is that they need replacing periodically due to wear and tear. However, these types of surge protectors are much more expensive compared to reflow or clamping types.

Why do I need surge protectors? 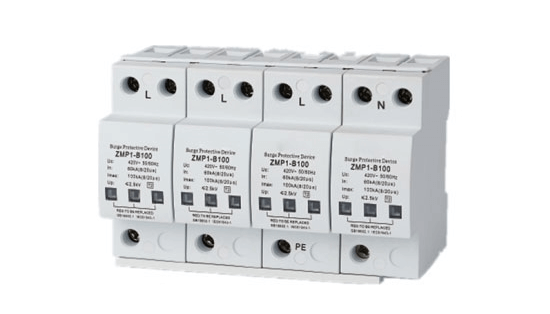 There are many reasons you need surge protectors. Apart from keeping your devices safe, here are some other major benefits of using them:

Your appliances will run more efficiently. This is because the surge protector will limit the voltage to a level that matches its use. Applying too much voltage can damage your appliance due to excess energy supply.

Prevents equipment damage. Electricity has a very high voltage, so it can easily cause physical damage to your appliances even if there is only a small amount of excess electricity. Surge protectors not only prevent this from happening, but they also have built-in mechanisms that shut off the power supply in case too much voltage enters the circuit.

It protects against power spikes.When appliances are left on for long periods of time, they will start to use more electricity than usual. This can spike the total amount of voltage in your home due to the wear and tear of your appliances. One way this problem can be solved is by turning off or unplugging devices that are no longer in use. If this isn’t possible, then you will need to use a surge protector to protect your devices and appliances from spikes in voltage.

It maintains the efficiency of your equipment.Even though most modern electronics are designed with built-in protection against power surges and spikes, these mechanisms usually wear out after some time. Eventually, they will stop working completely. Using surge protectors can help improve the life of your devices because they prevent excess voltage from damaging the internal components.

Components of a surge protector

This houses the components of the surge protector. It protects them from physical damage and provides a way to conveniently carry it around, especially for portable power strips.

This component diverts excess electricity away from your devices to prevent them from causing any damage or simply wasting energy by not being used.

It is the key component in a surge protector because it controls all of its operations. The microprocessor monitors your home’s power supply and determines when to switch on or off the voltage limiter according to how much electricity is being supplied at any given time. It also acts as a normal resettable fuse by breaking the circuit to prevent too much electricity from entering the surge protector.

The fuse is designed to protect the MOV, so it’s usually placed after it in most models. If there is an excess of voltage entering your home, then this will trigger the fuse to break and stop electricity from flowing through it. This way, no electricity can pass through the MOV, so it will function normally and not be destroyed by a power spike.

This is a simple tube that discharges excess electricity from the socket by allowing it to pass through the tube.

It’s an opening in a surge protector where you can plug your appliances and devices into. Surge protectors usually have several of these, so you can connect more than one device at a time.

What to consider when buying a surge protector 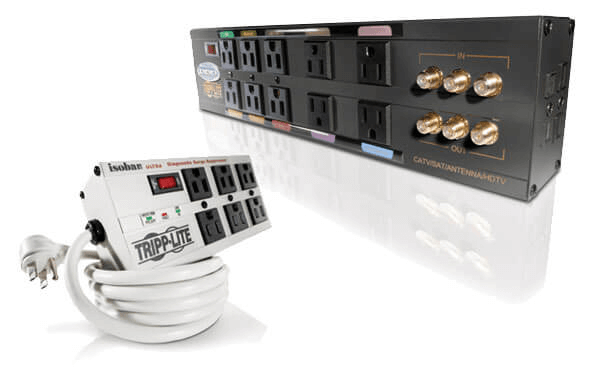 There are many different types of surge protectors available in the market, but it’s important that you buy one that fits your needs. The following list provides some considerations that will help you choose the right model for your home:

Voltage rating-this is measured in joules and determines how much voltage can pass through the surge protector before it fails to work properly.

Energy absorption- this is measured in joules, so just like the voltage rating, it will tell you how much energy can pass through the surge protector before it fails to work.

Response time- just like with circuit breakers in your home, the response time is measured in seconds and determines how soon it can resume its normal function after a power spike passes through it. Your aim should be to buy a model with the shortest response time possible.

Response voltage-this is measured in volts and determines how high a voltage spike can pass through the surge protector before it fails to work.

Maximum energy dissipation-look for a surge protector with this feature, as it’s measured in watts and determines how many watts can pass through the device before its components heat up to dangerous levels.

Maximum let-through voltage- this is another important factor to consider when buying a surge protector because it measures how much voltage can pass through the surge protector from your home’s power supply.

Fire safety- check for a surge protector that is UL listed and TUV certified, as this will ensure that it has been properly tested to meet fire safety standards worldwide.

Durability-look for a surge protector that comes with a manufacturer’s warranty. You can also check online reviews on the product, as this will give you valuable insight into how durable it is on average.

Joule rating-this is the most important factor to consider when buying a surge protector because it determines how much electricity will pass through the device before it fails to work. You should always pick a model with the highest joule rating possible.

How do I choose the correct joule rating?

When choosing a surge protector, it’s important that you get one with the highest joule rating possible, because this determines how much voltage can pass through it before it fails to work.

How do I know what surge protector that I need?

Also, ensure that the surge protector is fully compatible with your electric appliance. One way to check this is to refer to the owner’s manual and look for a symbol that represents a power surge. This will help you determine if your appliance already has built-in protection or not.

What are common mistakes when buying a surge protector? 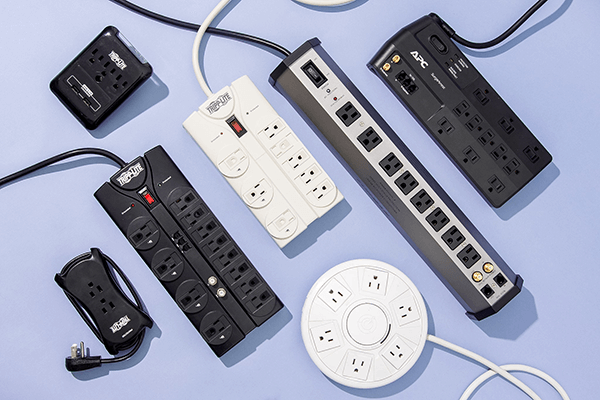 When you’re shopping for a new surge protector, there are several things that you should look out for. First of all, avoid models with high clamping voltages because these will prevent high voltage spikes from passing through the device.

Also, avoid models with a maximum response time of fewer than 3 nanoseconds, as these take longer to reset themselves after a power spike passes through them.

Why? Because most of the popular and well-known manufacturers in China provide a wide selection of high-quality surge protectors that are designed to be used with any type of household or industrial equipment. Don’t just settle for any brand, always do your research before you buy.

At ICRFQ we are a reliable distributor and supplier of surge protectors in China. If you need help, simply give us a call and one of our friendly sales staff will be pleased to answer any questions that you may have.